Stay up to date and get free STLs monthly!

We're Andy and Gem, and we create a monthly collection of 3D printable sci-fi miniatures over on My Mini Factory Tribes! We'd like to invite you to join our email newsletter, where you can learn about what we're up to each month as well as receive a free sample STL from the current collection 🙂 Hopefully, if you see something you like, you'll decide to support us and if not, please enjoy regular gifts!

If you have a friend who loves 3D printing and sci-fi miniatures, it would be amazing if you could recommend for them to join our newsletter too. We'd really like to grow our email community 🙂

To sign up, all you have to do is enter your name and email address below. Then just confirm your subscription by clinking the link in the first email you receive. By doing that, you'll be redirected to a folder containing your free miniature, fully pre-supported and ready to print 😀 Each month, we will then send out a new free mini!

Your free Simii Clone miniature! Join the email newsletter to download him. 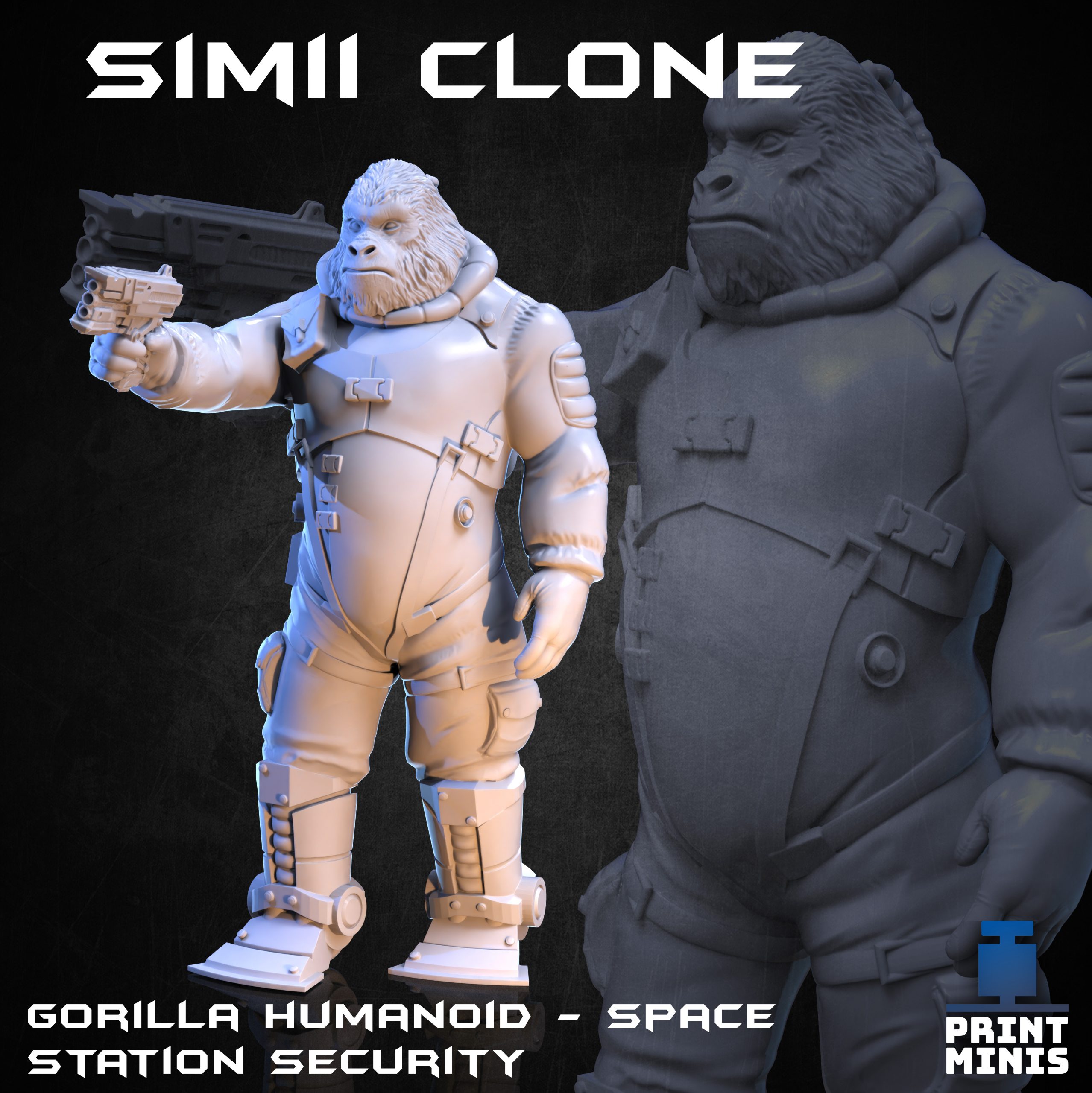 The Simii is from December's In Orbit release - check out the full render below! 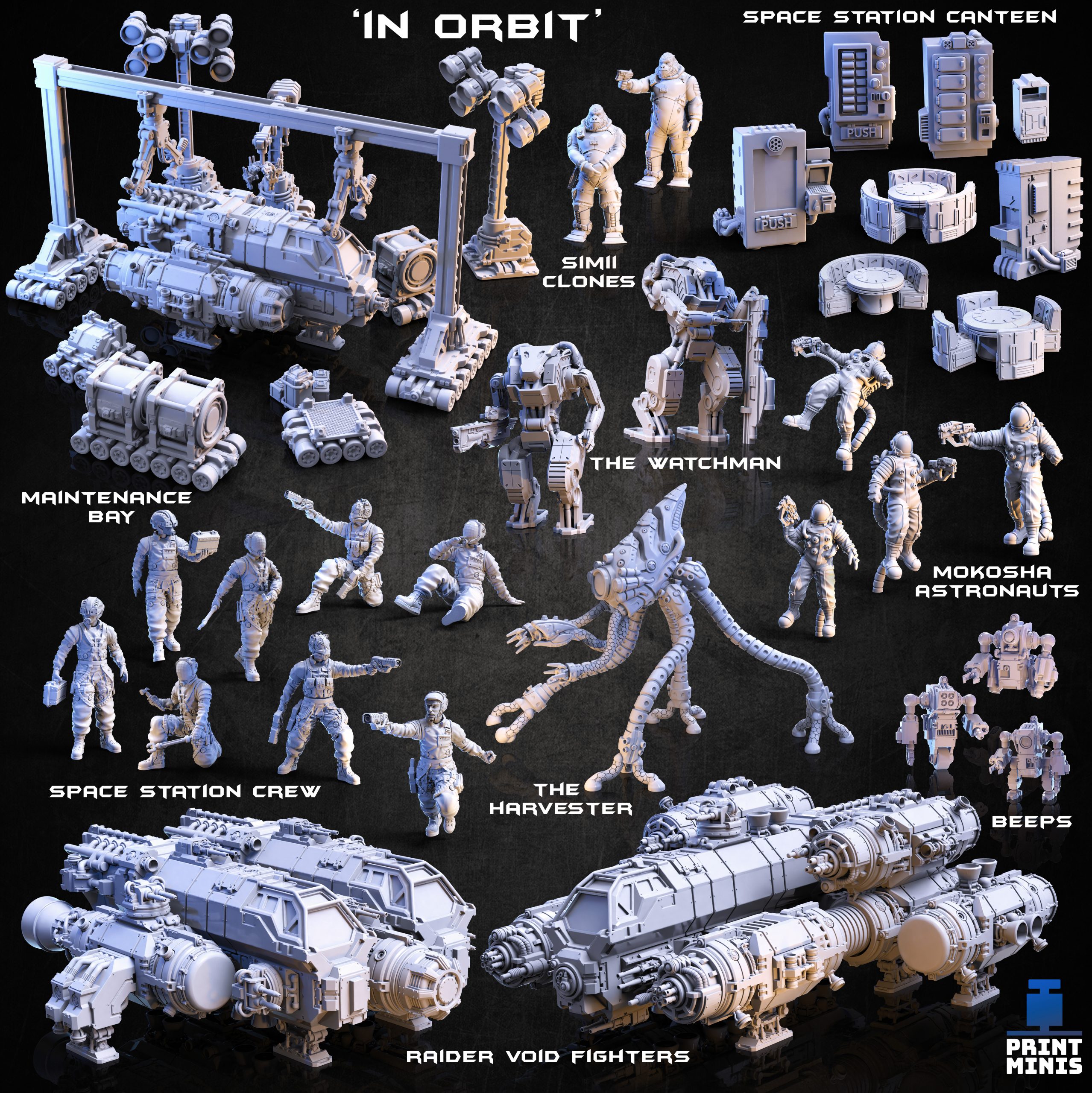 The In Orbit Storyline

You can join our MMF Tribes community for only $12.50 and get massive collections of high quality STLs every month. Plus, you support our small team of artists so we can keep making content for the 3D printing community 🙂

"Victor Ivanov had always known that his power was precarious on land. Surrounded on all sides by enemy cities and with a history of revolution from his own people, he resolved long ago to keep one eye on space. Exosia was a colonised planet and deep in its history, pioneers had settled there from a larger galactic empire. Space technology was then lost to the annals of time. But not anymore. Victor unearthed the lost documents and with the intelligence of his own scientists, he began building an extra-terrestrial base for The Authority on Exosia’s largest moon, Volos.

The Devana Space Station orbits Volos and currently houses The Authority’s Command and Control Centre for Space Activities (the C.C.S.A), with a substantial work force already in place on the station. Their role is two-fold - to defend Victor’s grip on Orbital Space and to construct Zoriuska Prime, an expansive moon base that will extract valuable Helium 3 upon its completion.

Devana is a beacon of Authority ingenuity - a gargantuan vessel, it easily contains squadrons of highly adaptable Raider Void Fighters and banks of Shrikes - long range anti-ship and bombardment rockets. Victor is taking no chances with his dominance in space. Also on board the station is a state of the art engineering sector, training facilities, and a technology research centre. Once Zoriuska Prime is finished, Victor will be near unstoppable in space.

Not everything is going to plan though, and change is coming to Exosia. The Zeki aliens recently discovered this ‘backwater planet’ when tracking their lost energy cores. But once there, the Zeki found something terrible - traces of an ancient alien technology in the cold north of the planet. A cataclysmic threat thought dormant for centuries. If the crystals are allowed to spread and ‘activate’ the planet, it will spell disaster for the galaxy. The Zeki now have no choice but take more direct action on Exosia, starting by conquering Volos as their base of operations.

Expecting little resistance from such a primitive civilization, the Zeki first send their Harvester robots to disable the Devana Space Station. With all systems down, those onboard would quickly die, leaving the station and moon clear for the arrival of Zeki troops. However, as the Zeki will soon find out, The Authority is far harder to wipe out than expected and this small insignificant planet will prove a force to be reckoned with in the coming war."

Join our email list for updates and occasional freebies!