What's in the Tekano Collection?

Our 2121: Tekano Corp set of miniatures are designed to be printed on an SLA resin printer. The collection contains 18 miniatures plus scenic bases, available both unsupported and pre-supported. They were available on on the Print Minis Patreon in March, but you can now get them on our My Mini Factory store. Sign up to our Patreon for an exclusive discount!
Characters - 11

There is a variety of unique characters and squads of fighters in this collection:

Our first set of modular troops! These 18 pieces can make over five different Sci-fi Ninja Operatives, covert assassins and spies for Tekano Corp.

Two massive Samurai Combat Robots with modular arms and weapons, enabling you to customise yours. Choose the weapons and pose, printing several robots to dominate the tabletop!

Our stunning Dragon Robot Ryujin - based on a Japanese Dragon God of the Ocean. He can connect to Nami through the Mind Control Interface and clutches a Tide Pearl from Japanese mythology.

A group of Warrior Geisha Robots who can go from serving tea to defending the Empress in the blink of an eye. Beautiful and deadly.

Our incredible stackable Hikari Pagoda, enabling you to build this terrain piece up as low or as high as you like!

The beautiful Torii Gate based on the traditional Japanese style of gate that marks the entrance to a sacred placed, but interpreted using modern sci-fi materials.

The deadly Hikko Shrine which has a traditional bell option but can also double up as a defensive turret with as a Laser Gun option!

It's been 50 years since the first Tech Wars changed society forever, and the fighting has never stopped. The rising sophistication of technology and our dependence on it gave tech companies vast amounts of power. They became richer and more powerful than even the governments.

The hearts and minds of the population were easily manipulated by controlling the narrative available online. Corporations started using cryptocurrencies to further distance themselves from the bank and government oversight. As they made billions, they invested in new technologies in public services, launching better versions. Governments soon became obsolete, and then big corporations started fighting each other for power.

Those with money and technology now rule, with whole countries fragmenting into alternative territories. The Tekano Dynasty rose to dominance in Japan, growing rich and powerful from their superior robotics technology. In global demand, Tekano Corp robots are now everywhere and factions of New Japan can be found across the world.

However, in 2121 no-one remains in power for long. After all, technology might be profitable but so is war. Empress Taiyo must be ruthless and vigilant, looking out for anyone who might steal her robotics technology by stealth, or try to invade New Japan and take it by force. She has an army of robots and highly trained soldiers, and is prepared for anything!

You can now get these stls on My Mini Factory!

The Empress and her Samurai Robots

Empress Taiyo, the CEO of Tekano Corp - the biggest robotics maker in the world - is always looking over her shoulder. It's a cutthroat world in 2121 and to keep herself safe, she's usually always accompanied by one of two of her Samurai Combat Robots. They are linked up to the main HQ at all times and controlled remotely to enable them to detect and react to any threat from incoming bullets to virus attacks. 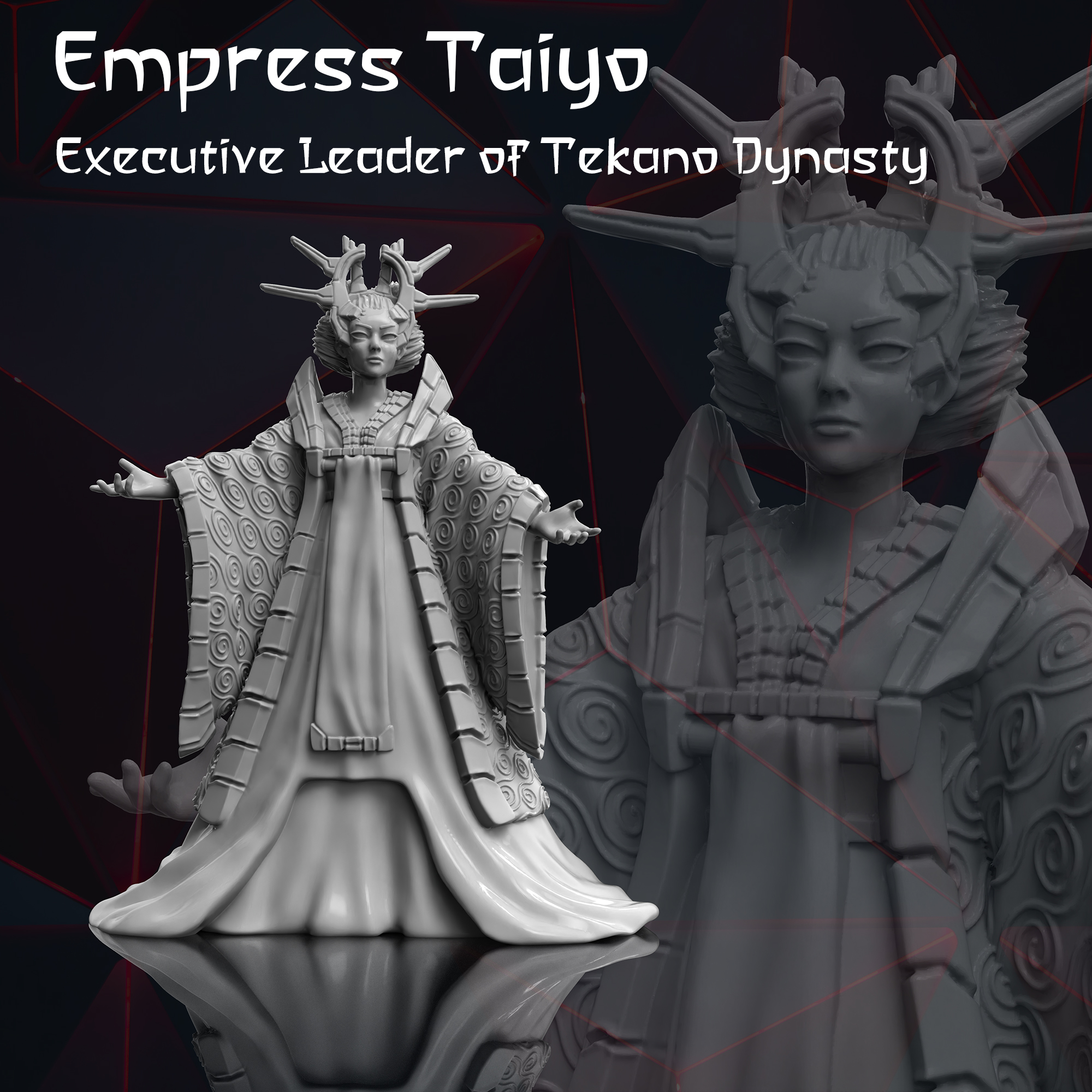 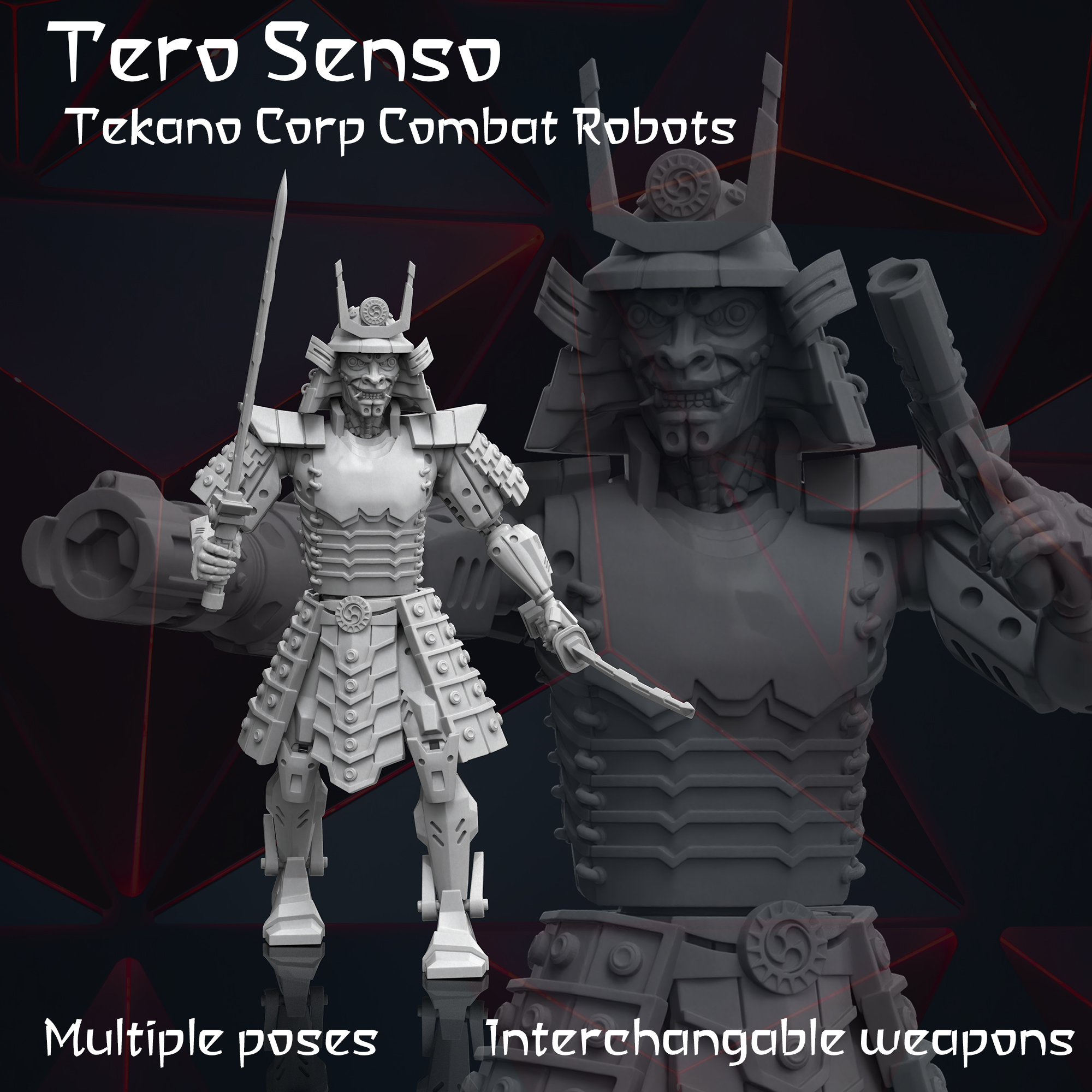 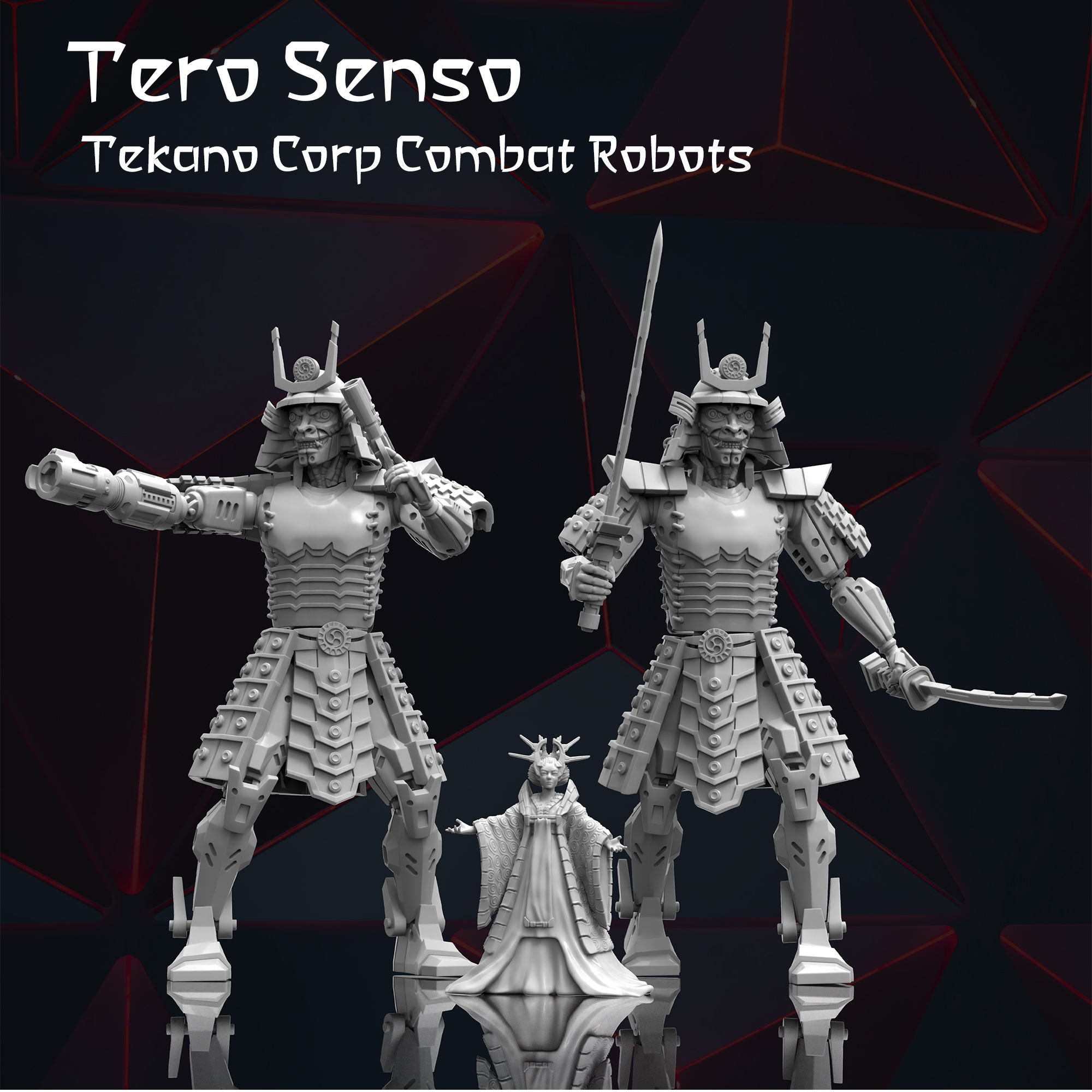 The Robotics Priestess and her Dragon

Nami has been the head of robotics for decades, pioneers some of their most innovative inventions, such as the AI program for Tekano's Warrior Geisha. Her most impressive invention to date though is the Mind Control Interface, currently undergoing testing with Ryujin the Dragon Robot. While Nami is linked to this incredible beast she can sense what he does and control his every movement. 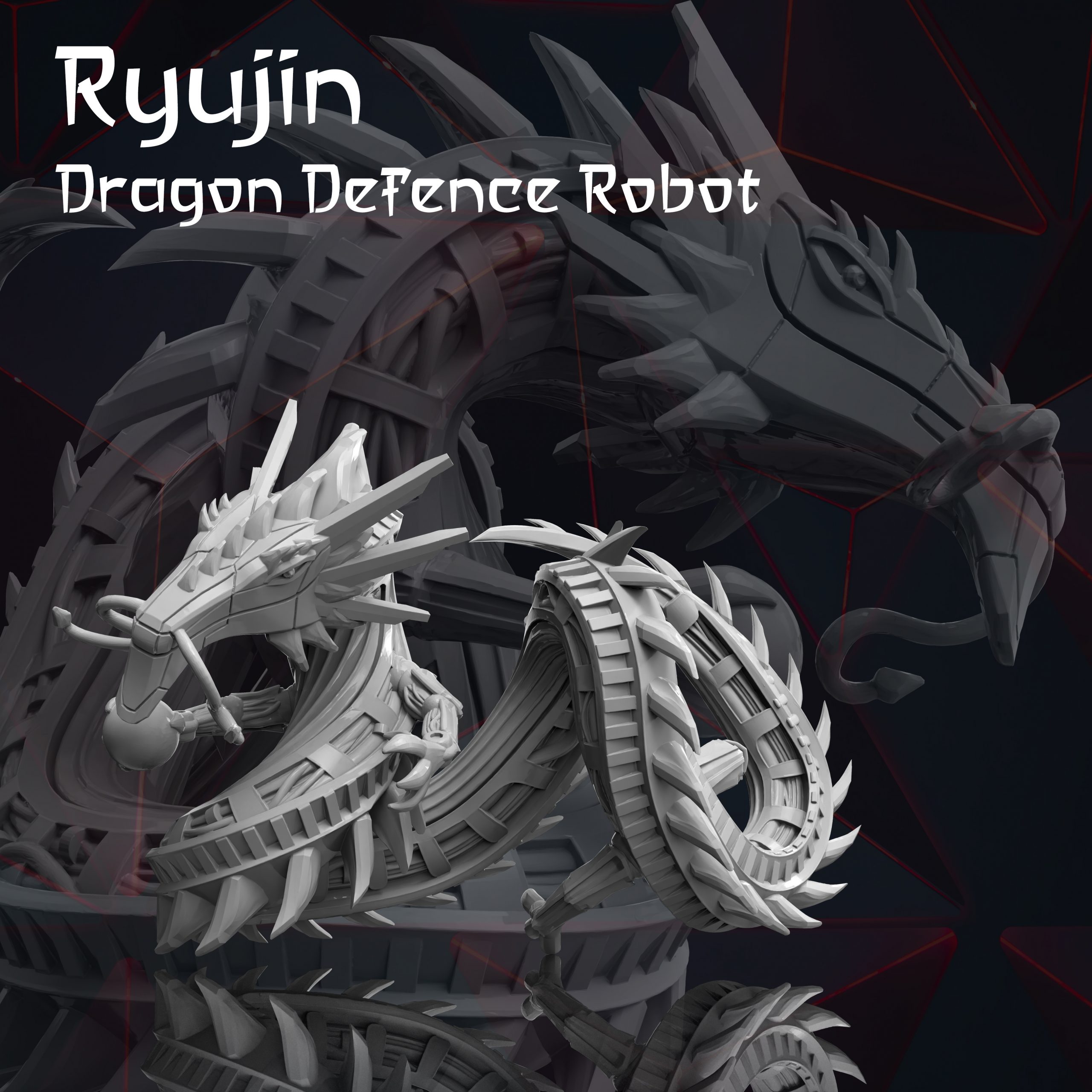 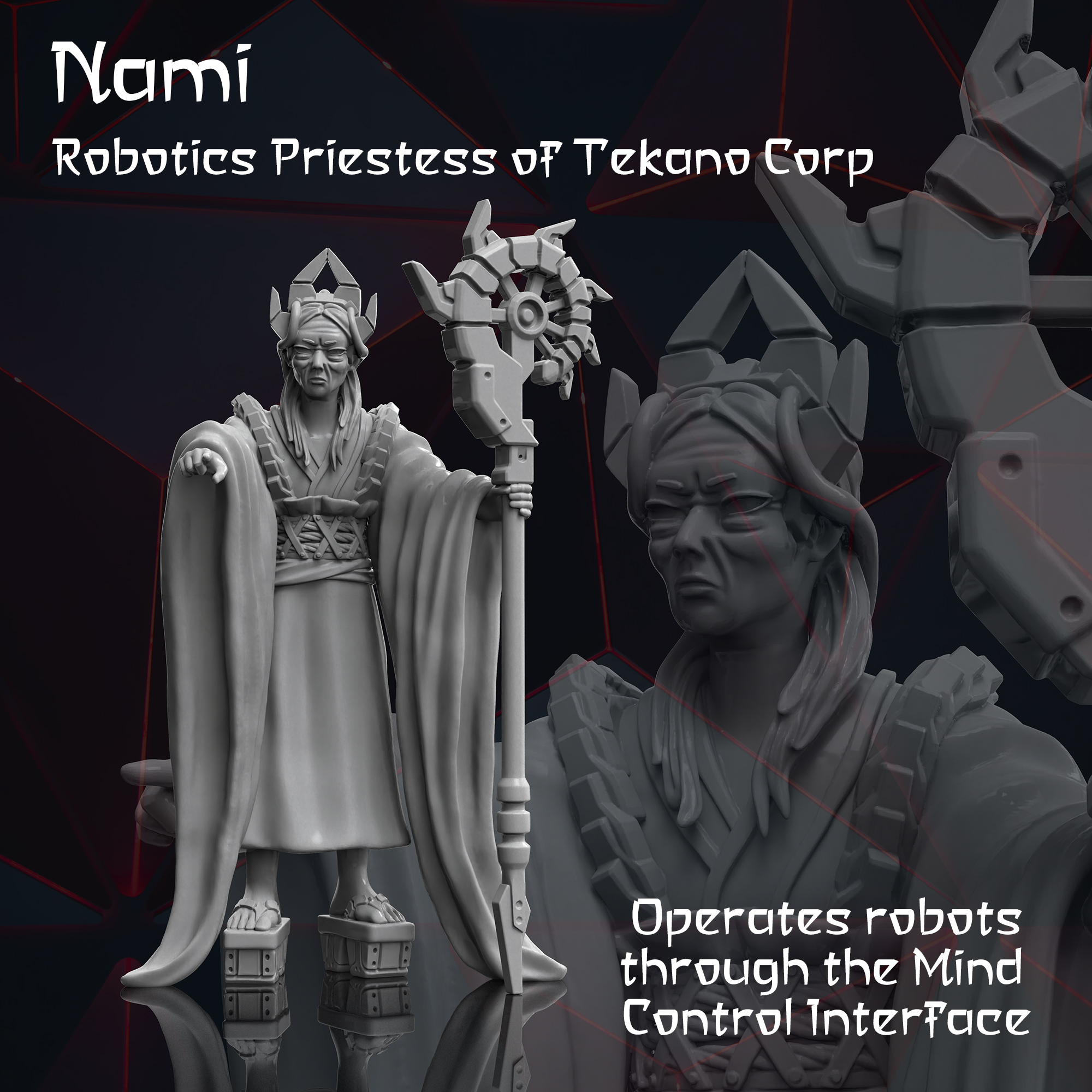 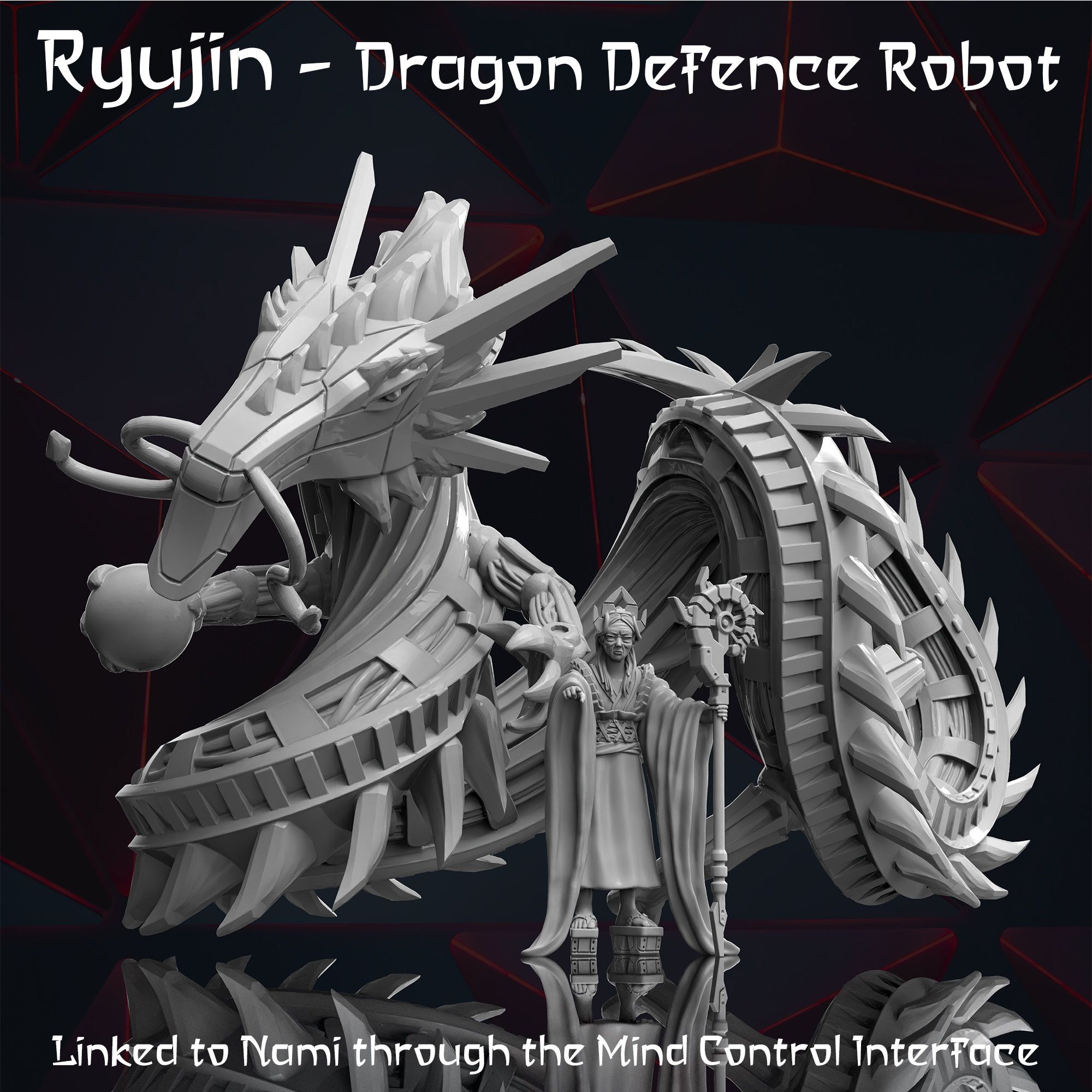 Our Patreon subscribers requested modular troops and so we created this Sci-Fi Ninja Kit! These 18 pieces can create 5+ different ninjas for your tabletop. We based their style on traditional ninjas and cyberpunk influences with robotic arms and body modifications. The Erito Shi are the covert team that protects Tekano Corp through espionage, interrogations, 'data liberation' missions and strategic assassinations. 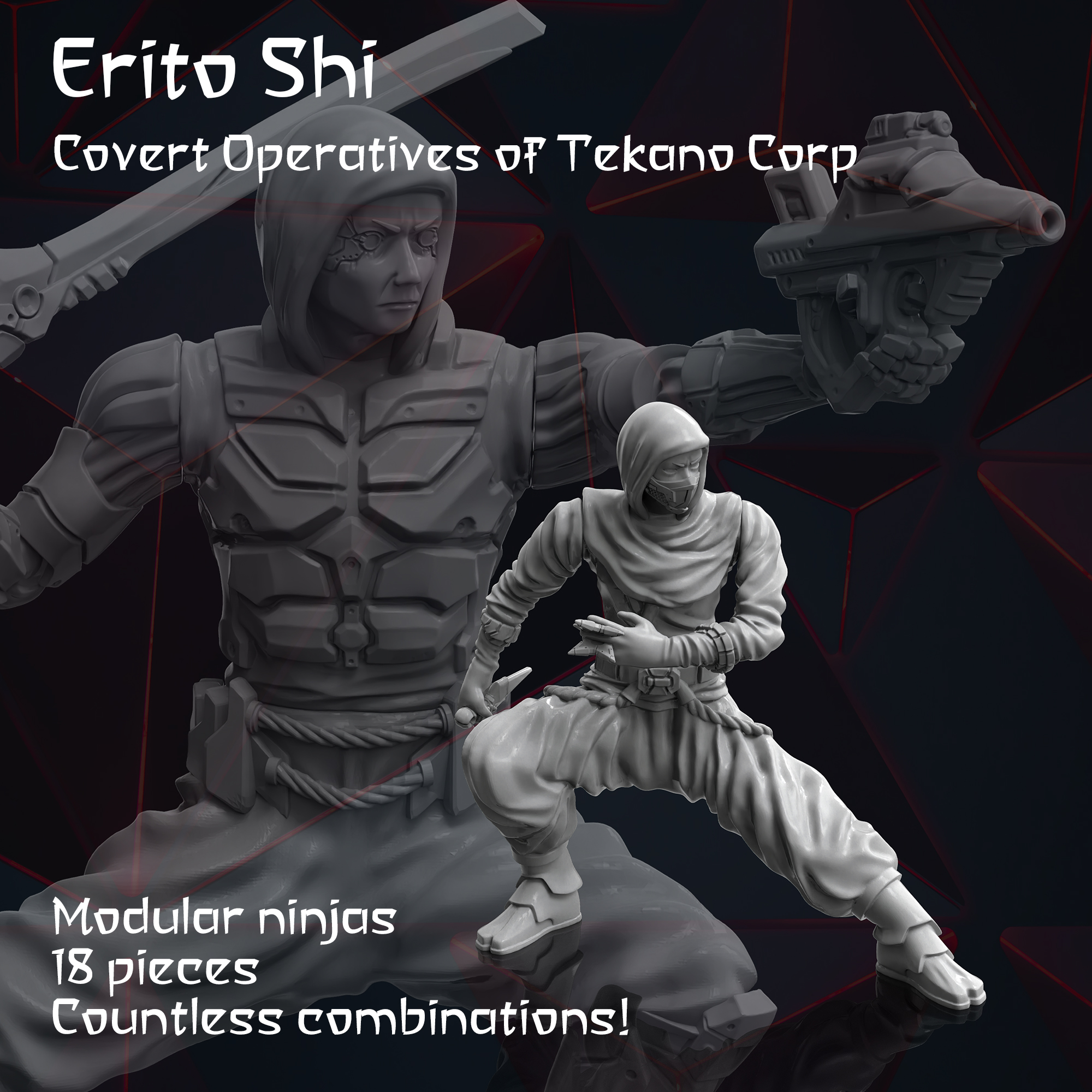 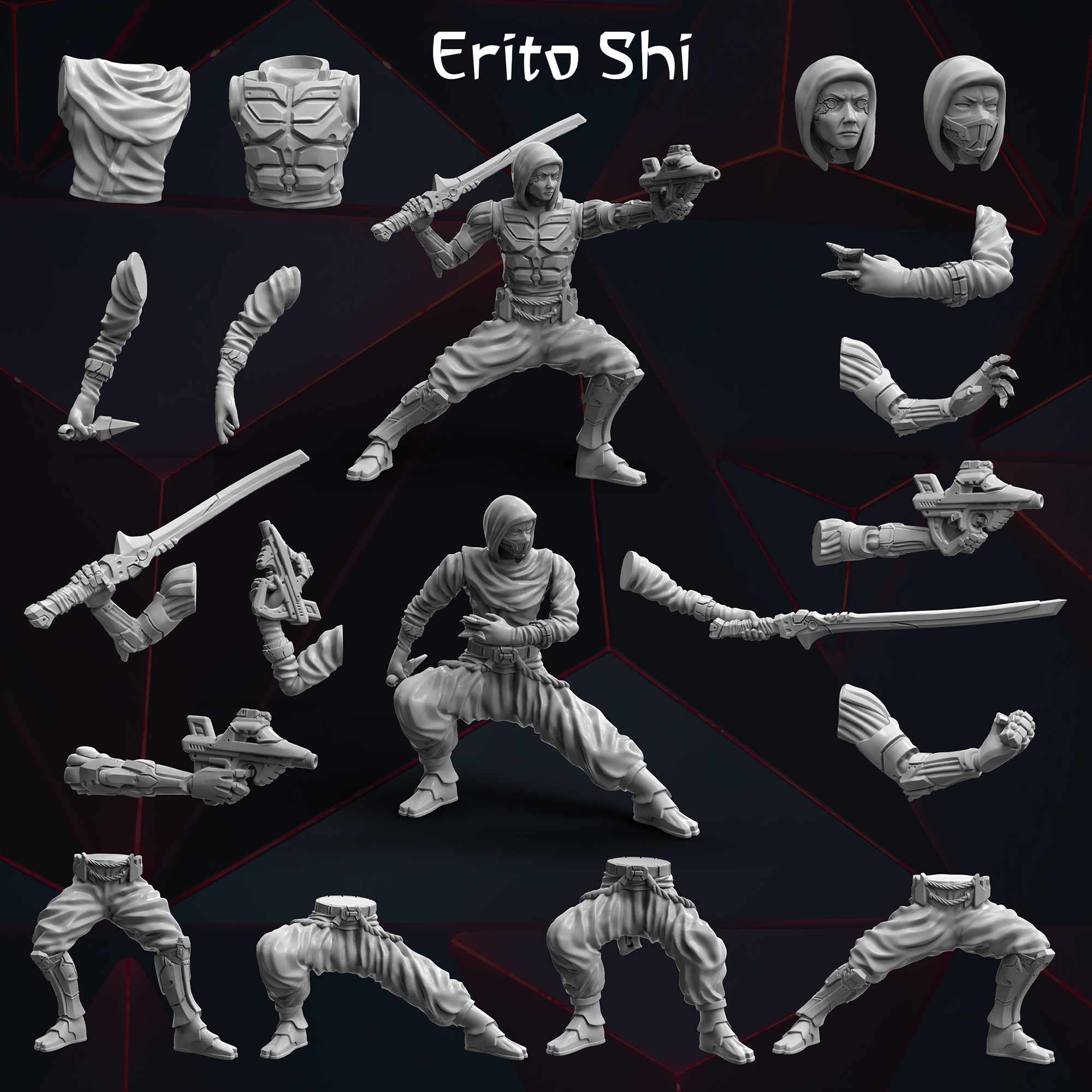 These beautiful courtesans provide entertainment at Tekano Corp functions, knowing all the traditional Japanese dances and being experts at brewing and pouring teas. They have sophisticated AI and can even hold conversations with guests. However, they also have a more deadly side having been programmed with a 'warrior mode' which can be activated in response to a threat to Tekano Corp. 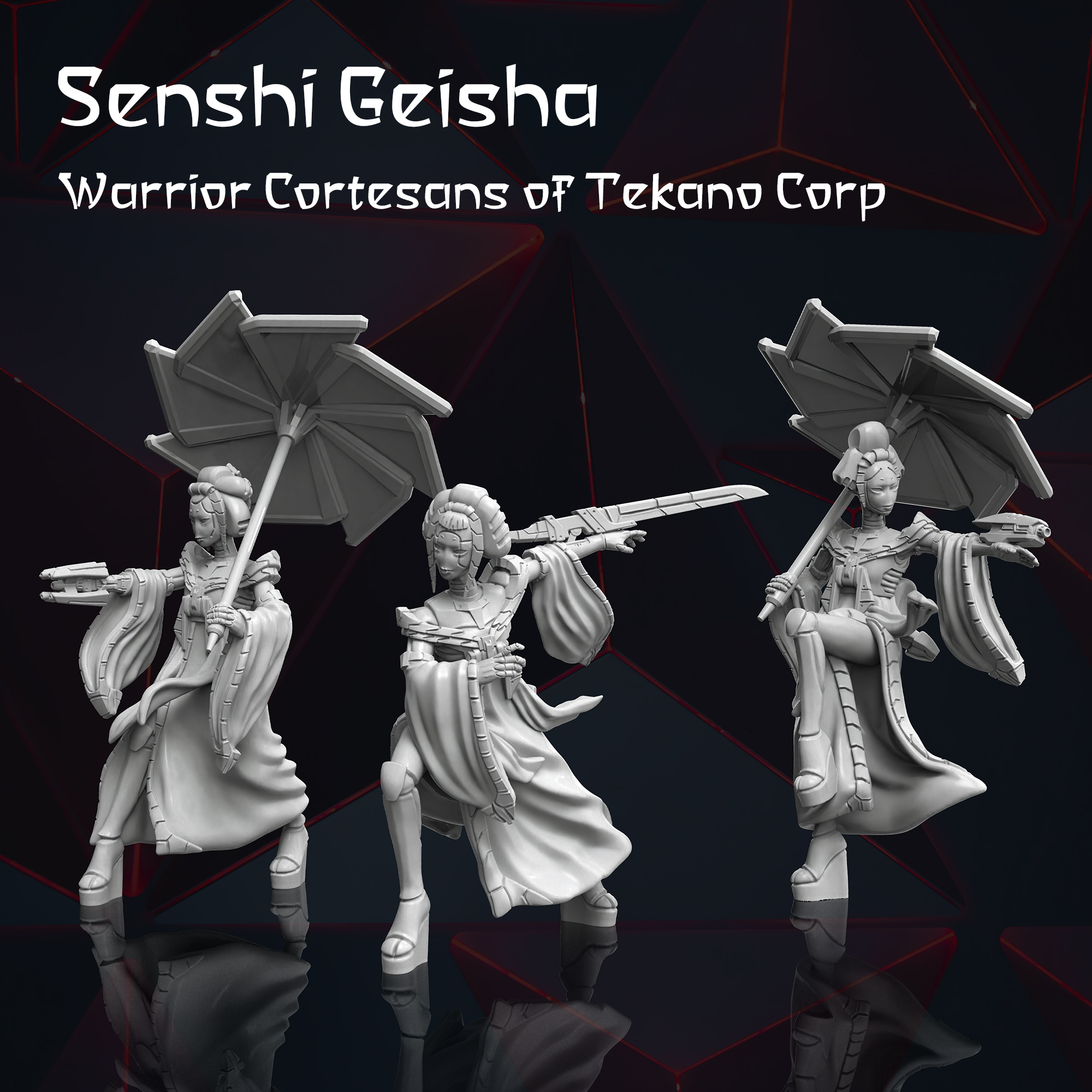 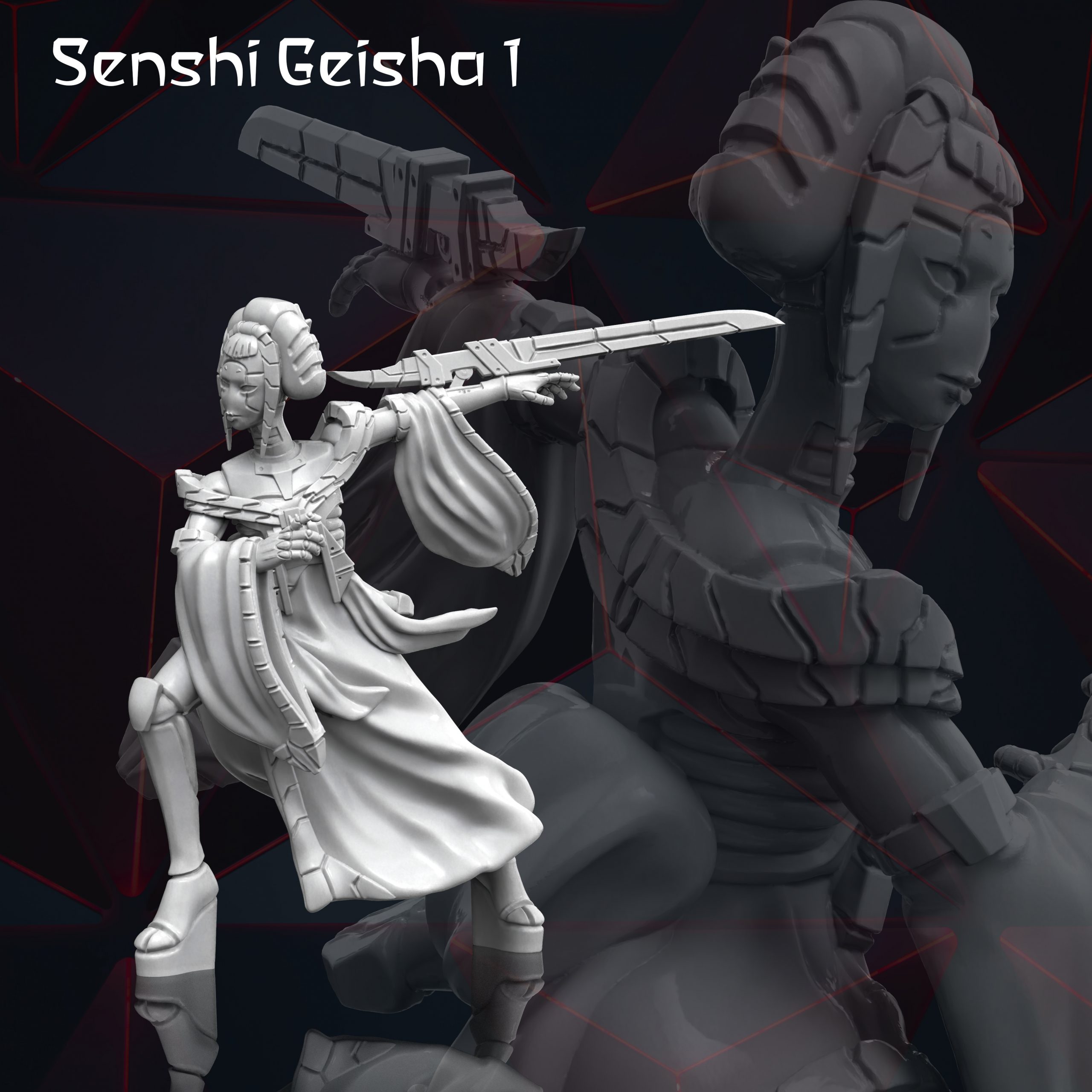 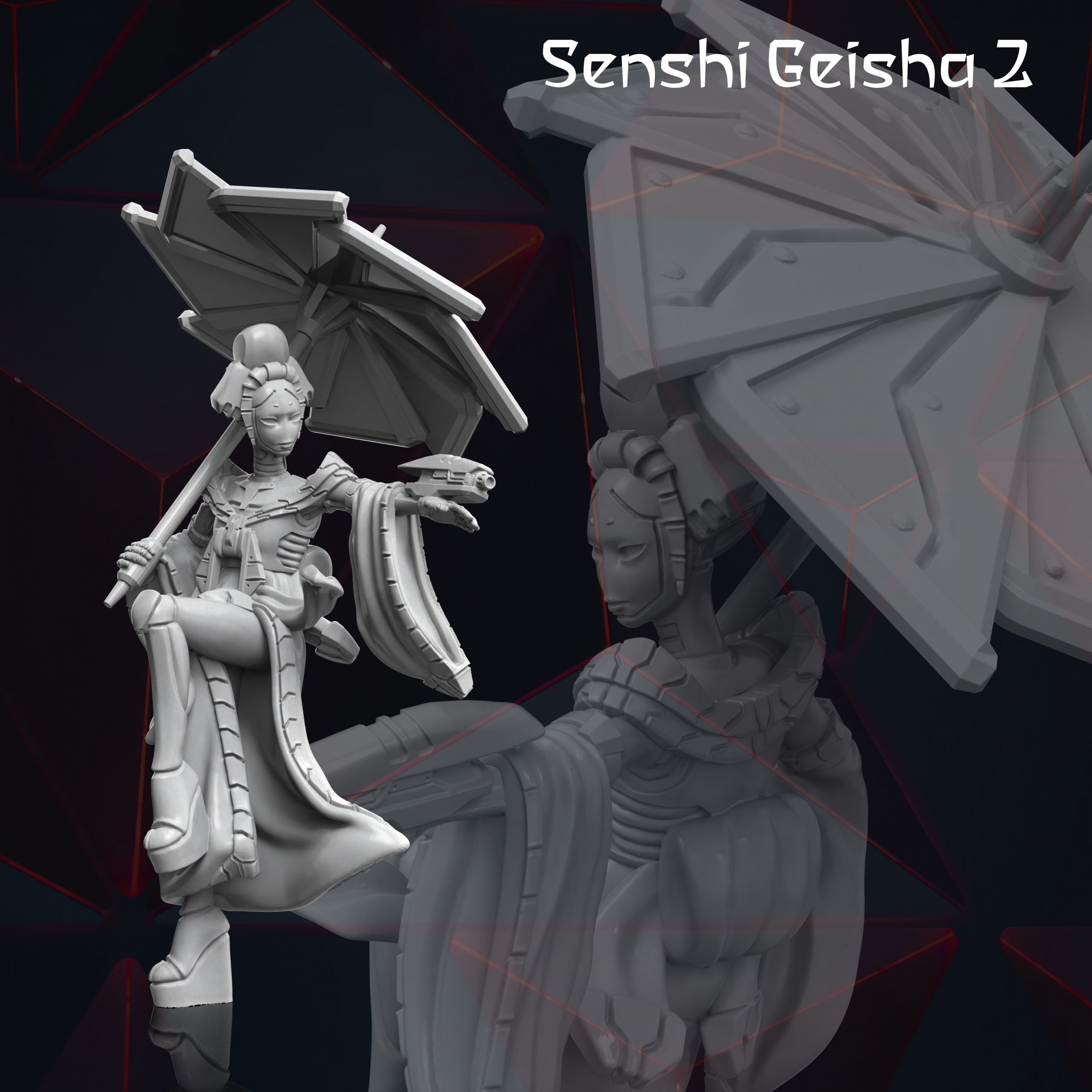 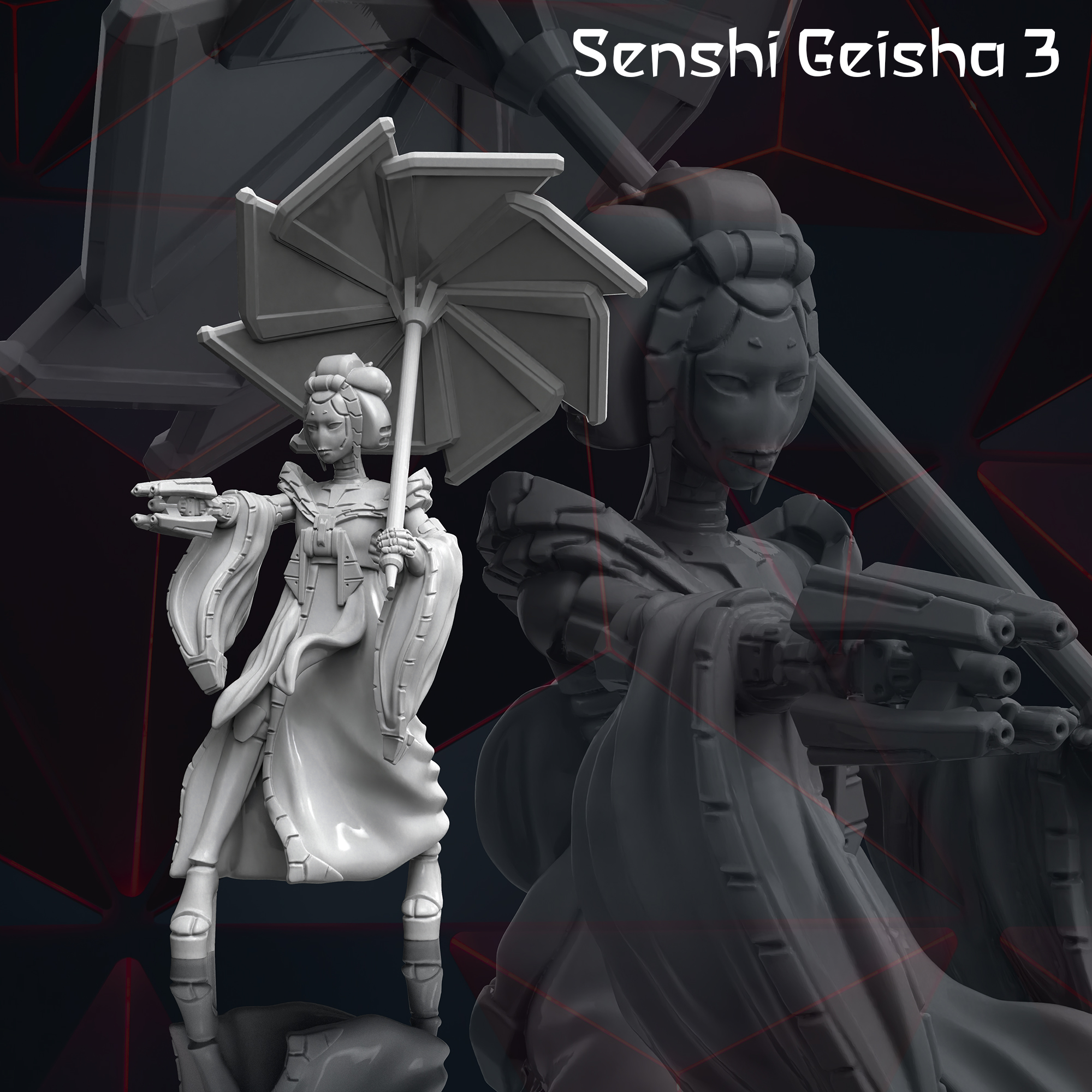 grab these 18 pre-supported stls on the Print Minis store

These highly trained guards can be found patrolling every inch of the Tekano Corp grounds. It is their responsibility to ensure there are no infiltrations of the premises from other competing corporations intent on taking down Tekano, either through murder or data theft. They are trained in many combat arts as well as equipped with the latest surveillance technology. Their Naginata spears are able to scan the environment for heat signatures to help detect an unauthorised presence, and their Kasa hats can detect attempts to hack Tekanos data network. By having hundreds of Heishi troops patrolling, Tekano Corp can detect almost any threat quickly. 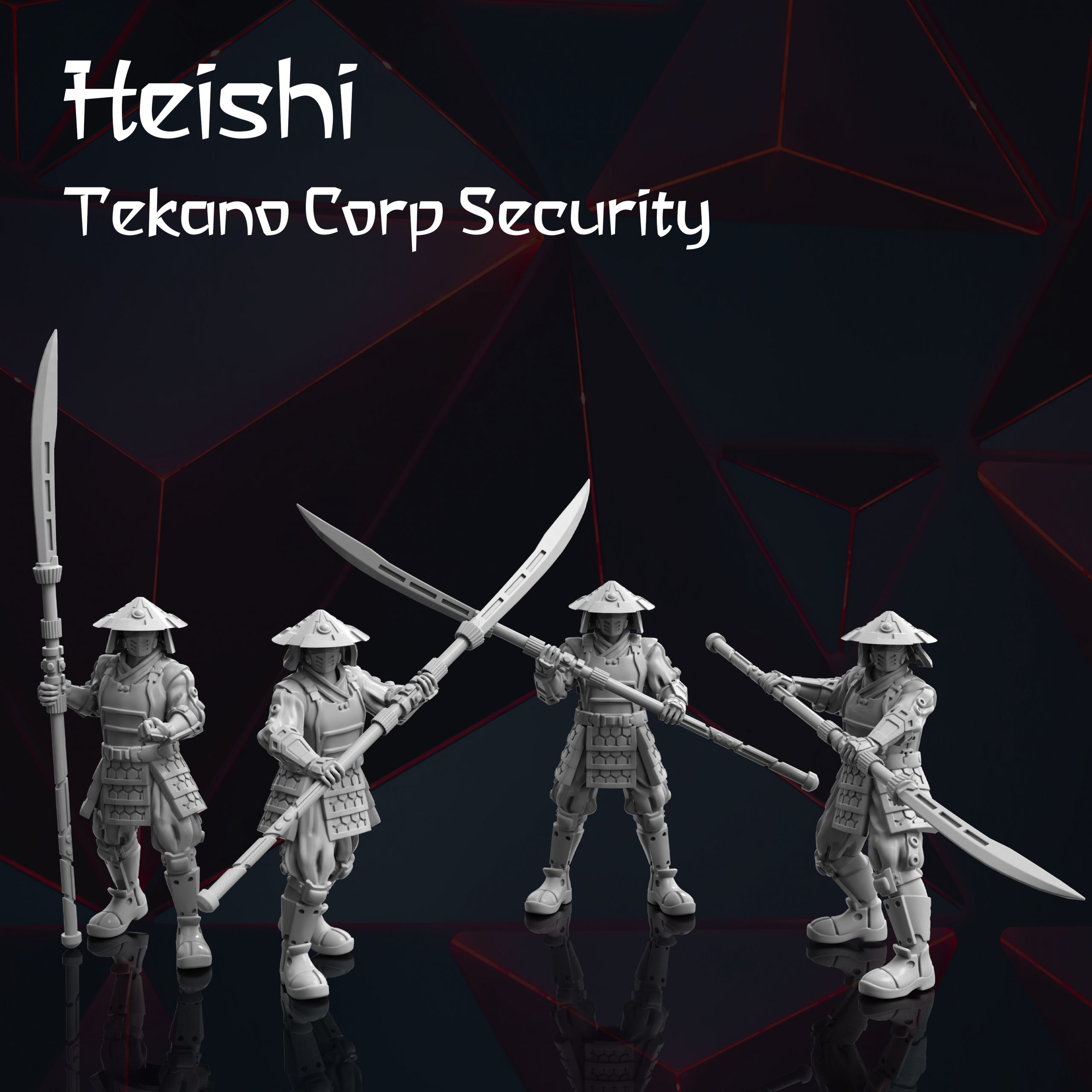 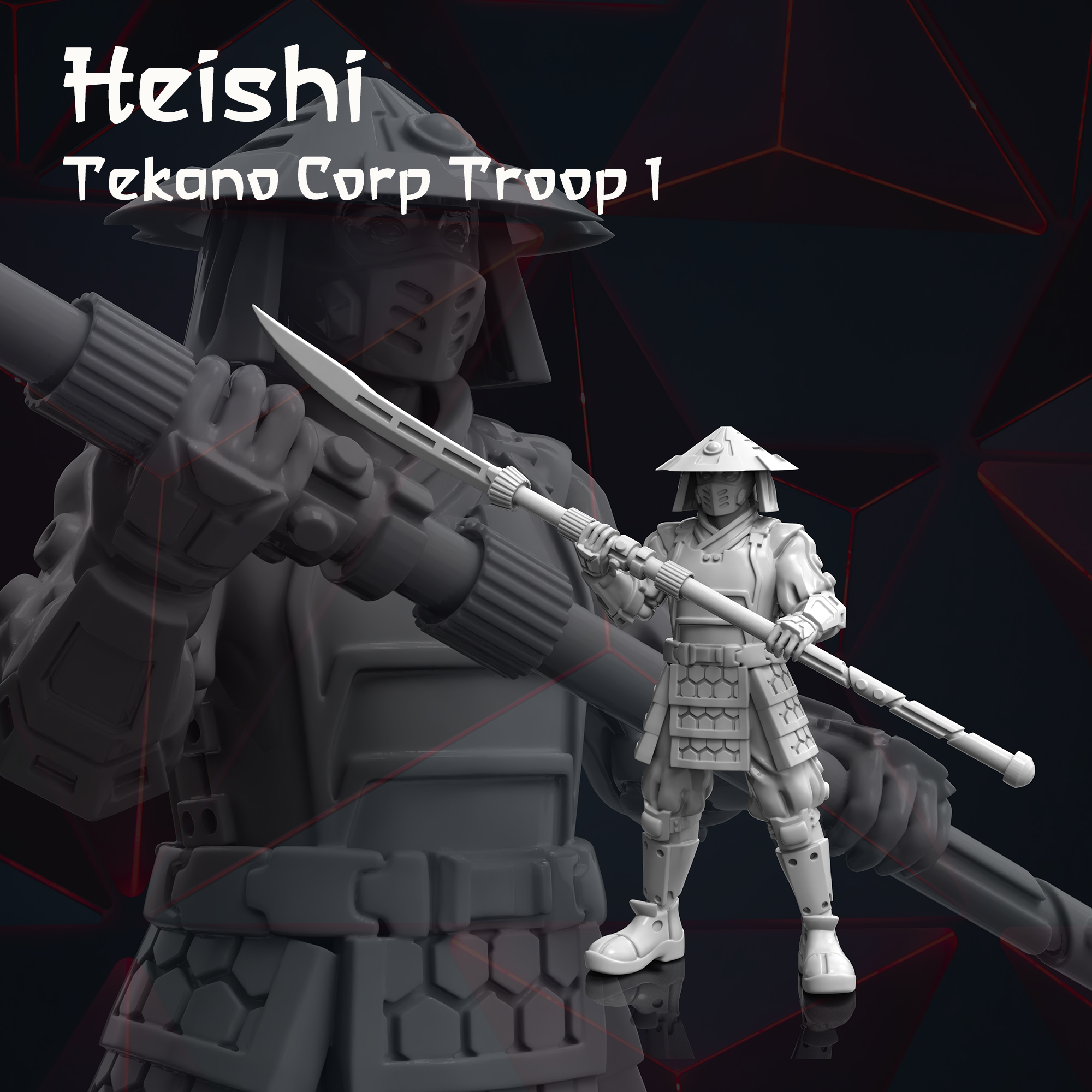 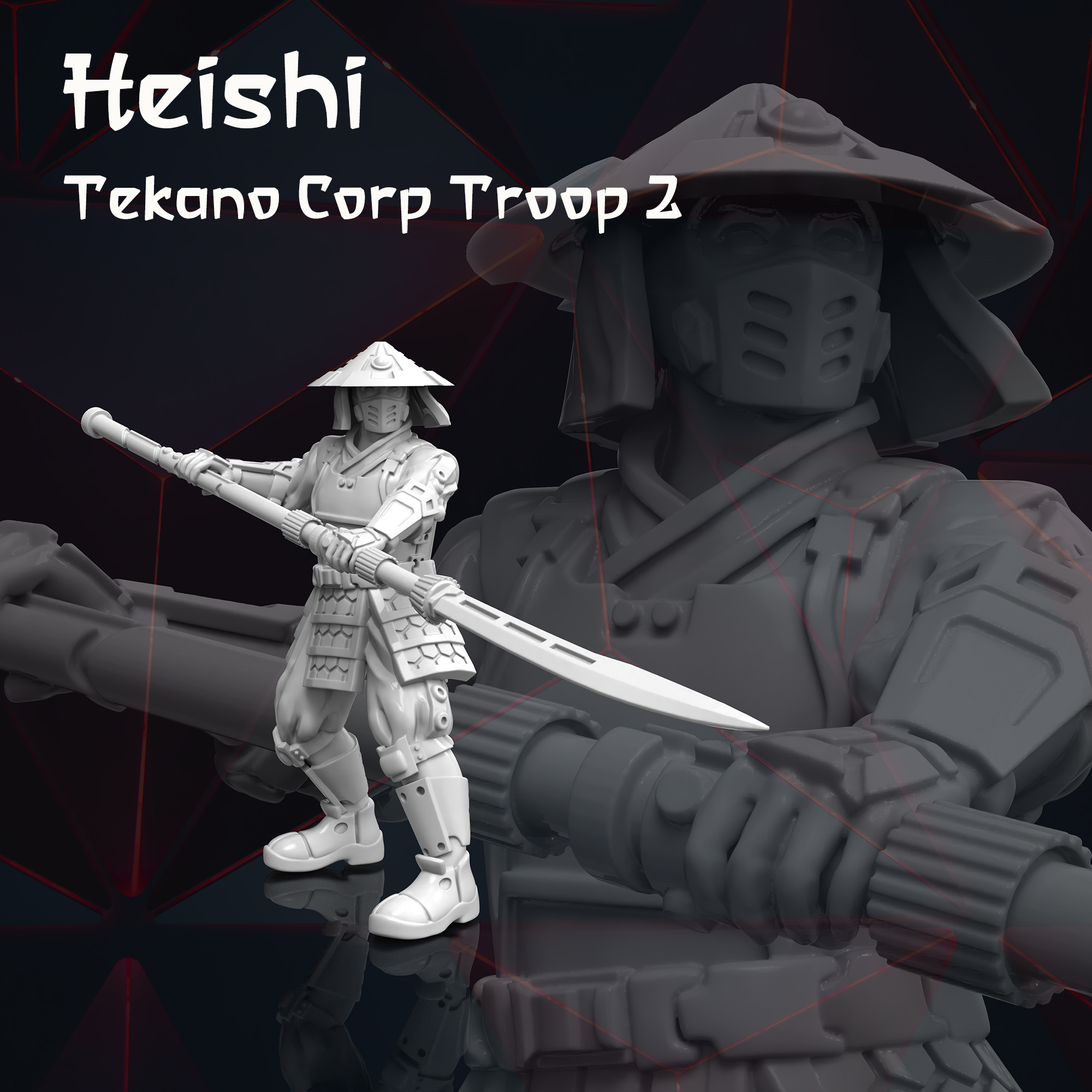 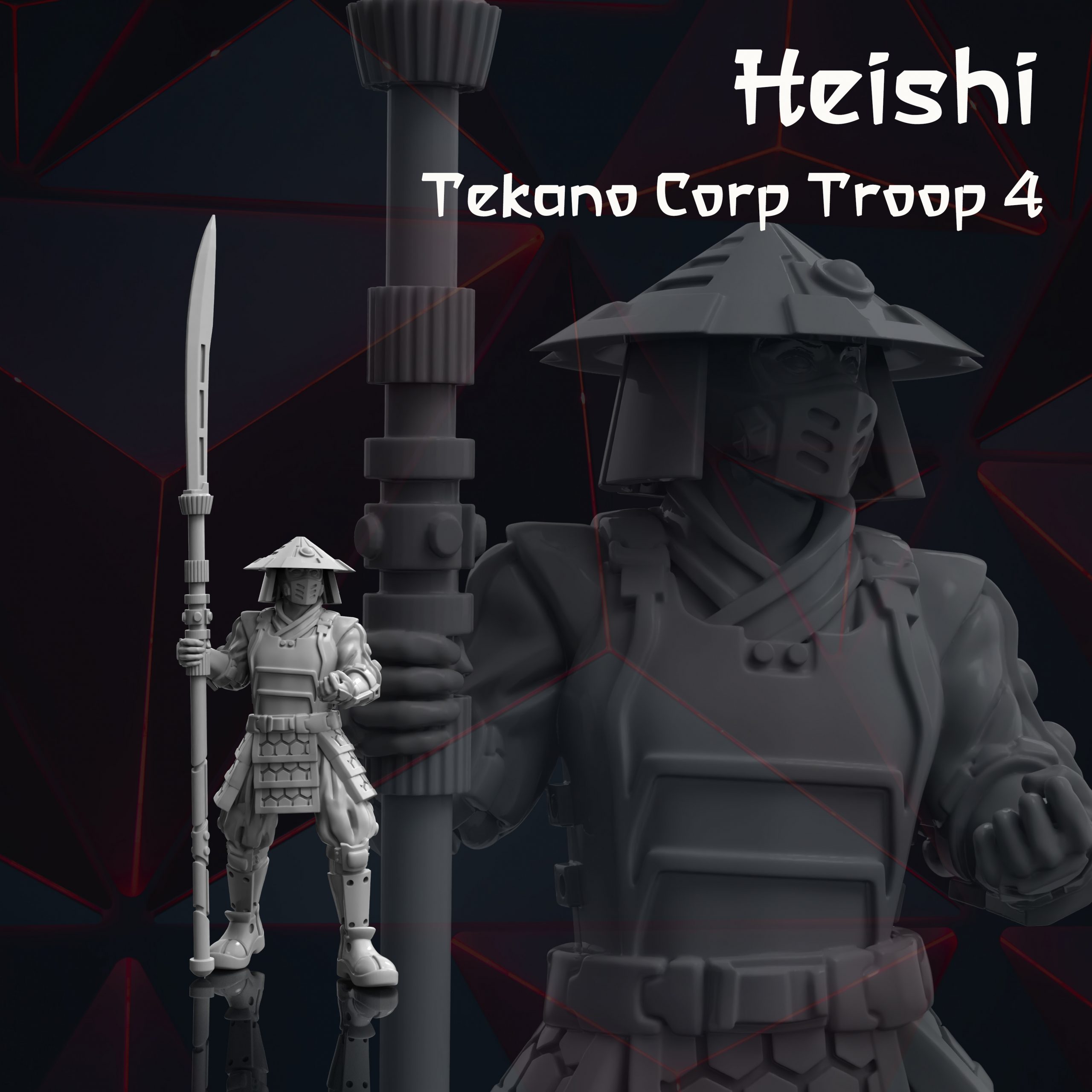 To give the environment of Takeno Corp some structure and help provide a sense of what the place is like, we have several terrain items. They also work well on the tabletop as structures of varying heights and sizes to play around. The Torii Gate is the entry into Tekano Corp, symbolising power and the sacred. The Tekano Dynasty now rules Japan and they want to promote their link to the divine.

The Hikko Shrine is found across the Tekano groups, and at first looks innocent, but in the case of an invasion the traditional bell will automatically swap to a Laser Turret, remotely controlled and with deadly accuracy.

We also have a beautiful Pagoda, which serves as the meeting rooms for Tekano Corp and is the ideal place to host important guests. It keeps in link to Japan's traditional roots while also being grand and a show of power. 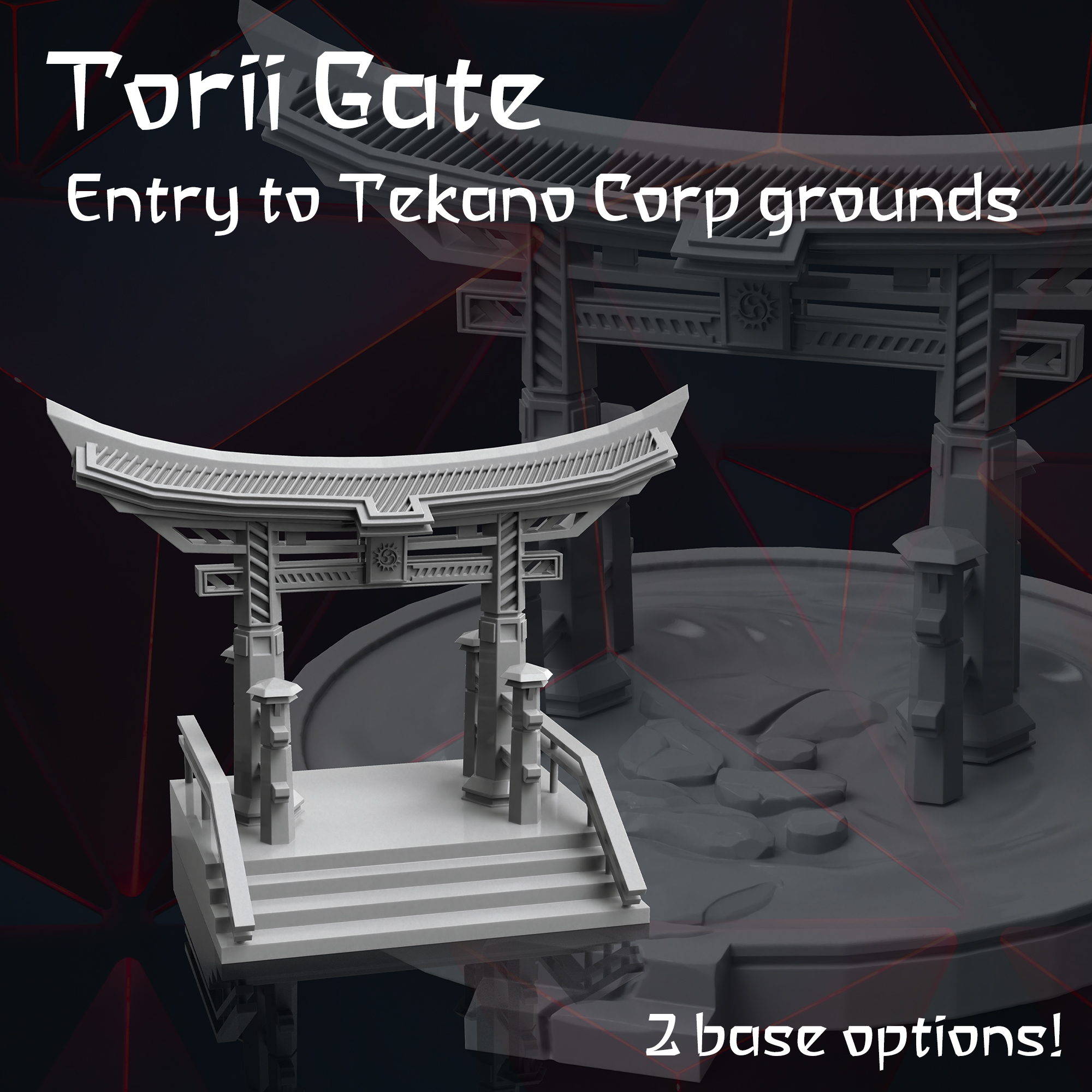 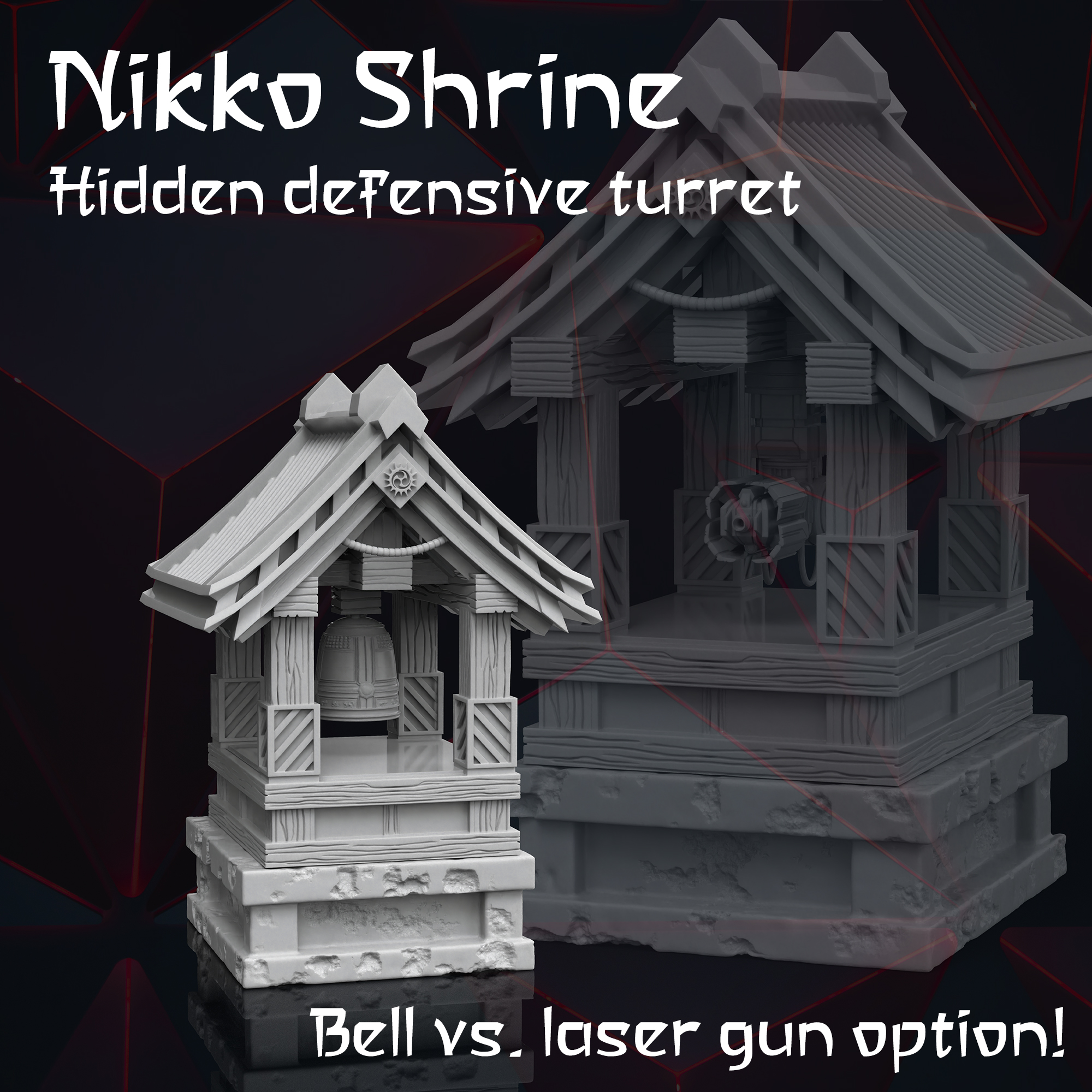 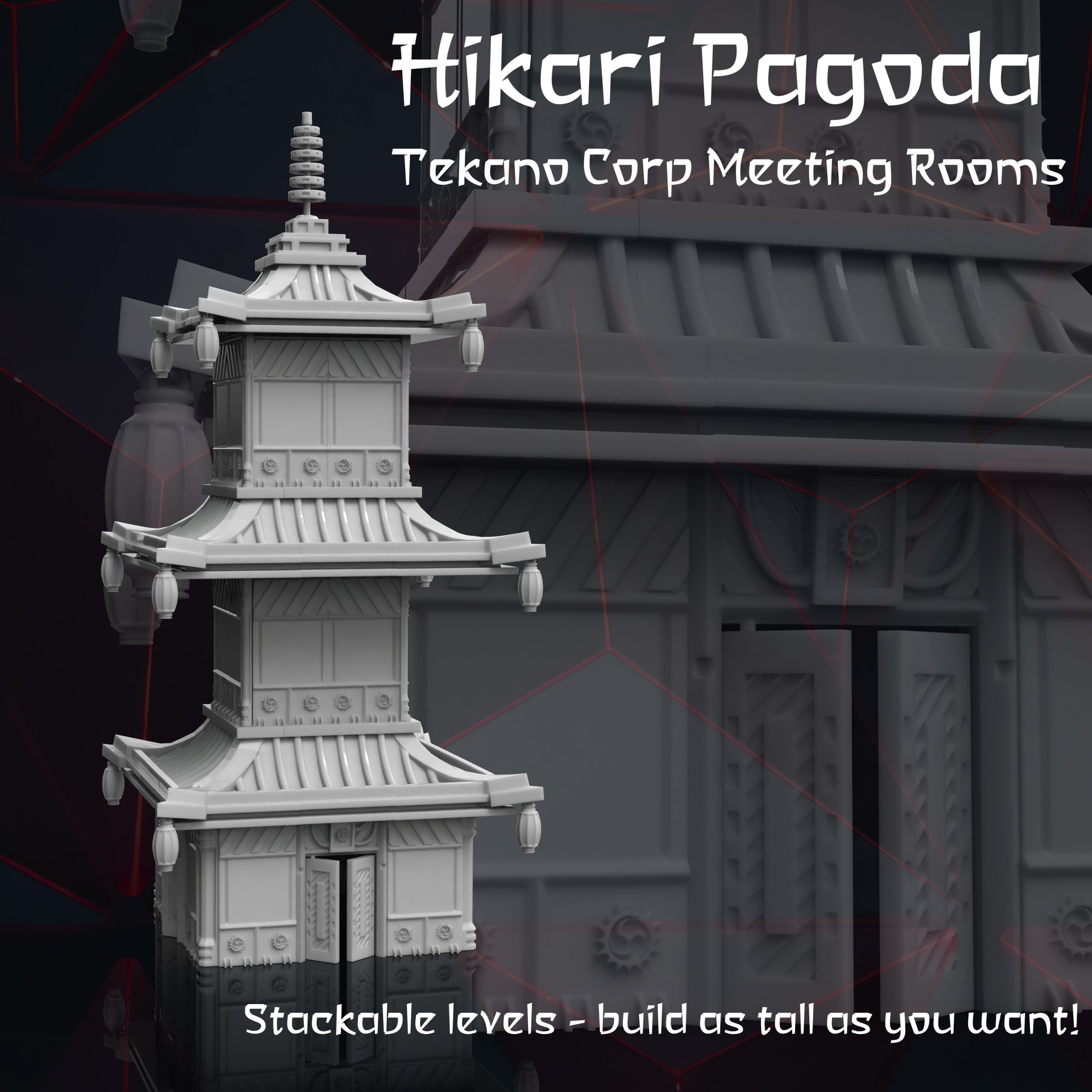 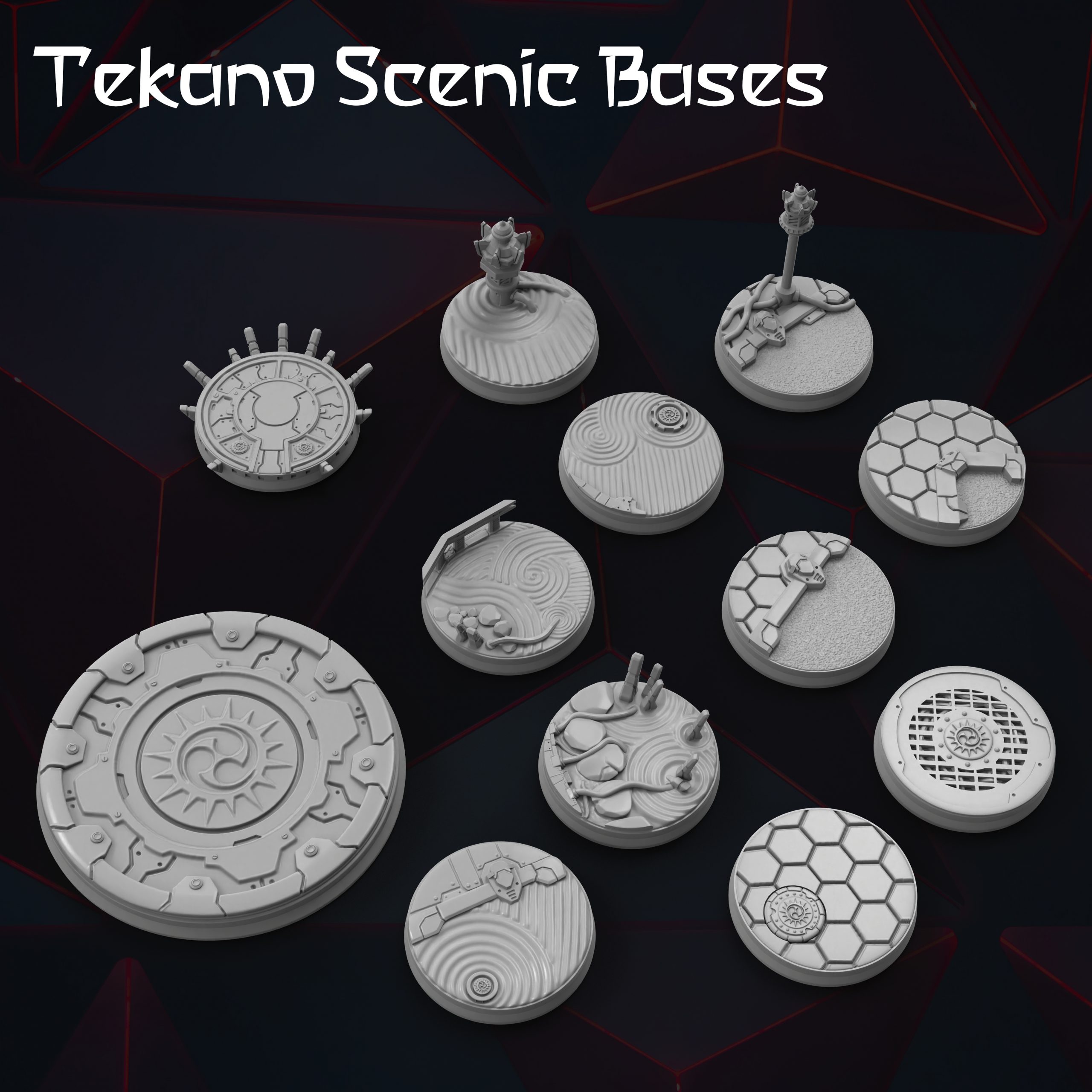 Finally, the Tekano Dynasty collection comes with a set of scenic bases. We have some cyberpunk inspired designs and a futuristic zen garden to really embody the way we have fused traditional Japanese culture with a technology dominated future.

Across many of the scenic items in the collection, you'll notice a sun symbol - this is Tekano Corp's logo. Japanese royalty is said to be descended from the Sun Goddess, and after Tekano Corp overtook Japan 30 years ago and ousted their royal monarchy after thousands of years of rule, they wanted to claim some legitimacy in the act.

Adopting the sun as their logo gave them a link to the divine, and they heavily pushed through propaganda that due to their superior robot technology, - which many Japanese citizens now relied on - they were chosen by the Sun Goddess to lead New Japan into the modern age of the new century, 2100.