What's in the Space Pirates Collection?

Our Space Pirate miniatures are designed to be printed on an SLA resin printer. The collection contains 25 miniatures plus 20 scenic bases, available both unsupported and pre-supported. They are now ready to purchase on our My Mini Factory store. Check out what you get below:
Characters - 15

Two distinct pirate sides, both with main characters and a modular crew!

For The Swift Crew:

For The Navarro Crew:

The idea behind our collection is that these two pirate crews are meeting on the alien planet Aeox, which is an automated mining hub. They are to make an exchange of booty - a dark energy core for a cache of Vintrandi alien weapons. The terrain supports this narrative.

When humanity first discovered fold space and antimatter energy, there was a huge space race between the biggest corporations on Earth to colonise planets in the Local Spur of our galaxy. There were many resources to be researched and mined, and hundreds of pioneer planets were established. Yet no alien civilizations were discovered. Were humans alone after all?

Decades later, Horizon Corp was hungry for expansion and dared to travel to the outer reaches of the Milky Way Galaxy, into the deep unknown. This gamble paid off and humanity finally found advanced alien civilizations, leading to a period known as the Enlightening. New trade routes were established, business boomed, and a second wave of colony planets were founded in the Centaurus Arm.

Many of the first wave colony planet’s were then abandoned by their corporations, as more profit could be gained further away from Mother Earth. Trade stagnated, economies crashed and these planets now found themselves untethered. A new age of Space Piracy dawned as first wave pioneers set out to seek their fortune amongst the stars.

Captain Swift and his loyal pirate crew have made port on the automated mining planet, Aeox. They strip antimatter energy cores from large ships and craft hundreds of high value energy cells to sell on the black market. Many planets pay handsomely for one of these which can fuel their settlements for years. Aeox is a metal mining planet and after hacking the system, Swift’s crew can now siphon off whatever they need for manufacturing.

Captain Navarro comes from an ex-military planet that was disbanded when trade moved north of the Galactic Centre. Left without work or purpose, she formed her own ruthless band of pirates. As both mercenaries and arms dealers, they now make a good profit by trading with militarised planets across the galaxy. Her latest deal is with Swift. She bartered an antimatter energy core they ripped from a gargantuan freight ship for the loot of phase weapons he scavenged from a wrecked Vitrandi warship. Navarro already has a buyer lined up, willing to pay a fortune for the rare technology.

The exchange is to take place on Aeox. As an automatic mining planet, it is uninhabited so there’s no risk of Horizon spies spotting the deal. Initial scans of the meeting point have shown it to be free of traps, but Navarro is taking no chances. There’s a bounty on all their heads, and captains have been known to turn on one another. She’s heavily armed and ready for a fight. Only time will tell what goes down on Aeox when the two pirate crews meet!

Swift grew up among the engineering workshops of the first wave pioneer planet called Ferox. Here he learned how to tinker and invent, a skill which would come in handy later on in his life. Once humanity discovered alien civilizations on the far edges of the Milky Way, all the founding corporations abandoned their original sponsored planets for more profitable ventures on the other side of the Galaxy.

After being abandoned, the once thriving engineering planet slowly fell into decline. With limited resources, Samuel Swift built his own small ship and took to the stars to find a new life for himself. As an engineer, Swift's skills were in high demand and he spent many years working as part of other pirate crews, honing his skills of barter, space combat and scheming.

Once he'd amassed enough wealth and a loyal following of his own, he was voted Captain and soon set out on his own ship. Now he has a secret base on the automated mining planet Aeox, where he manufactured dark energy cells to sell for a fortune to pioneer planets low on energy. He acquires the massive dark energy drives needed from huge trading ships that cross the dangerous shipping lanes of the Milky Way! 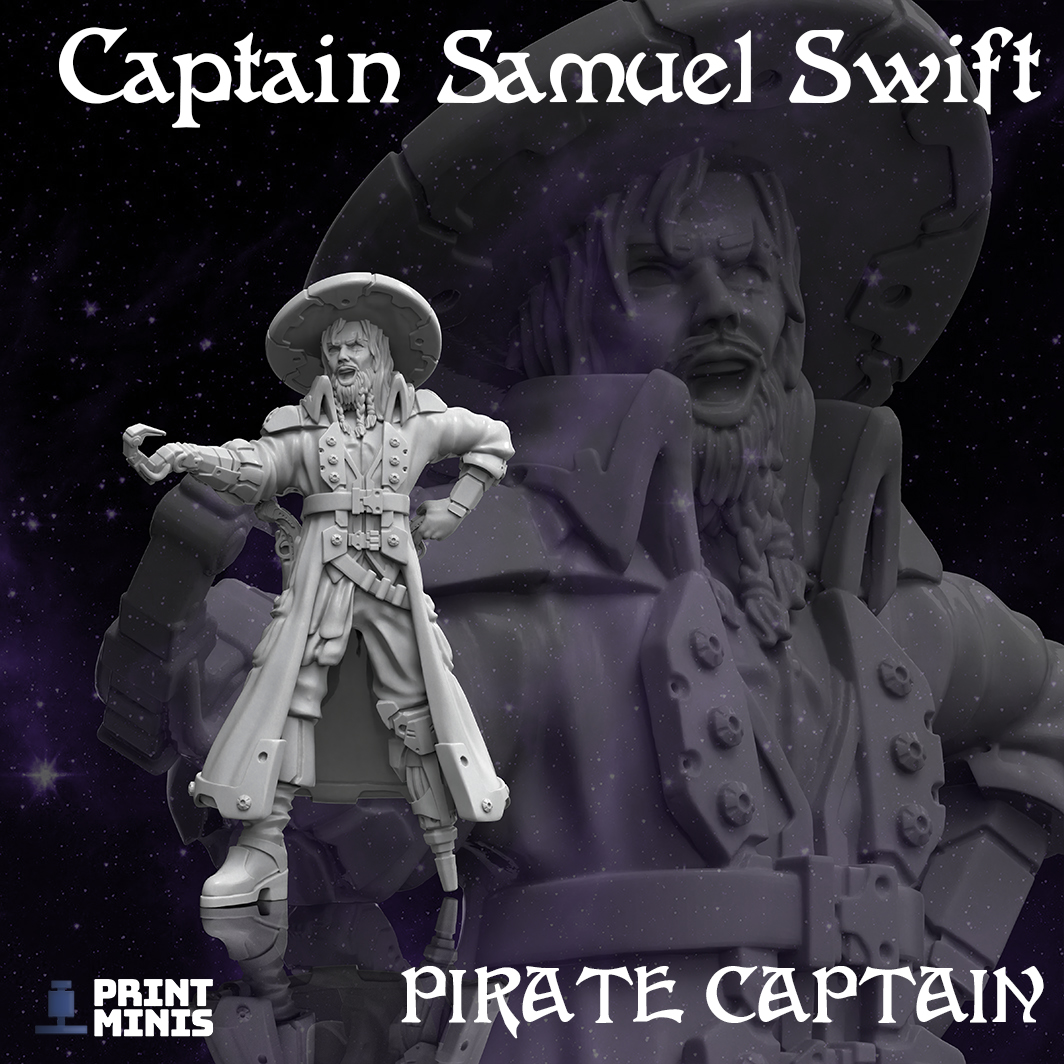 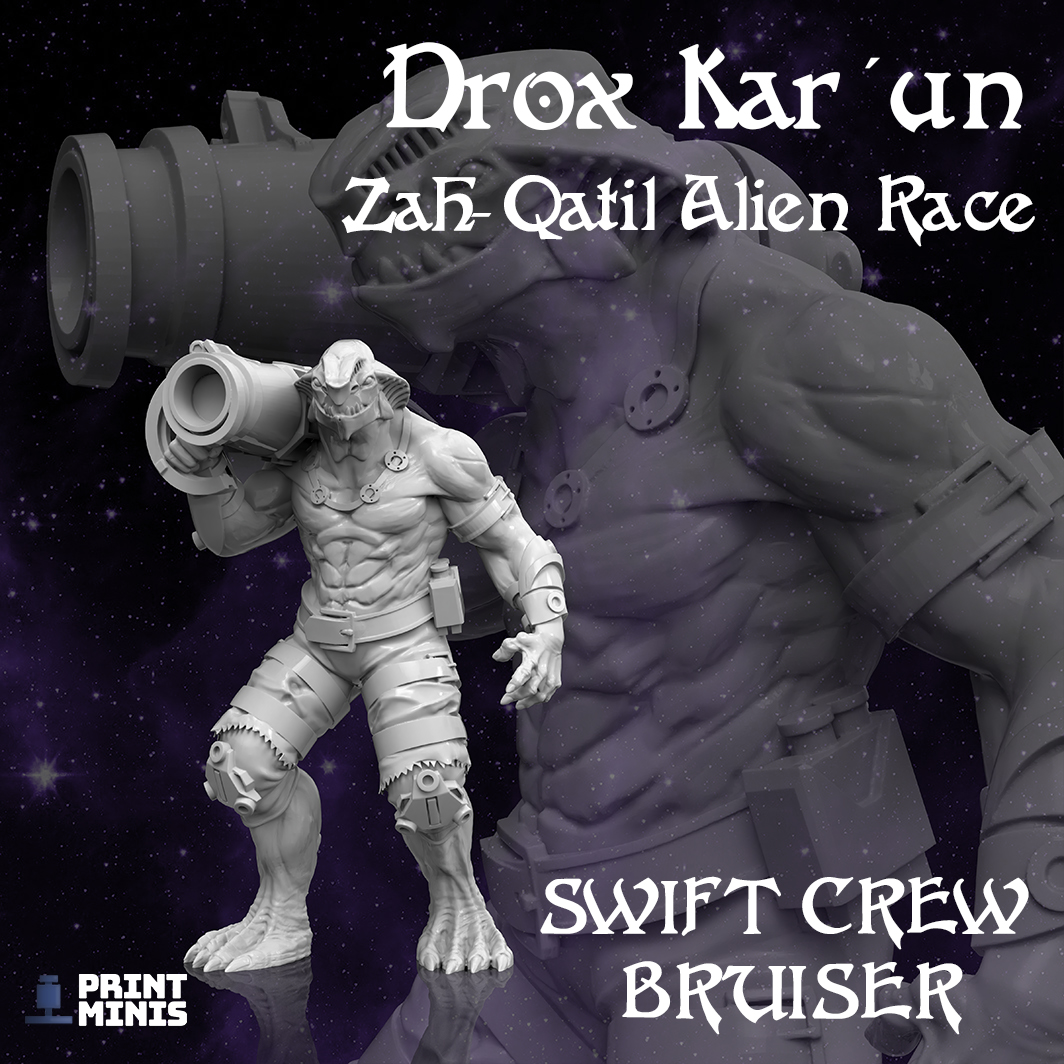 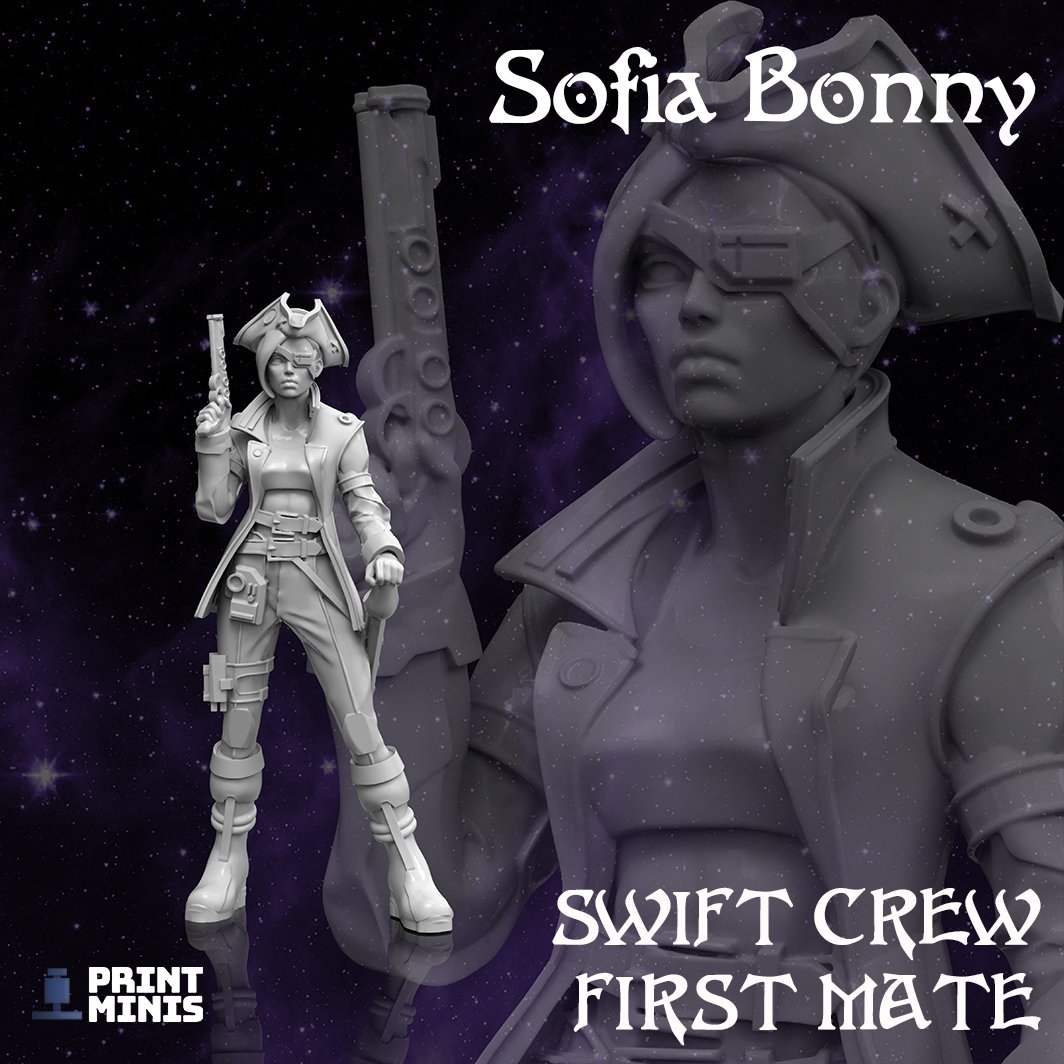 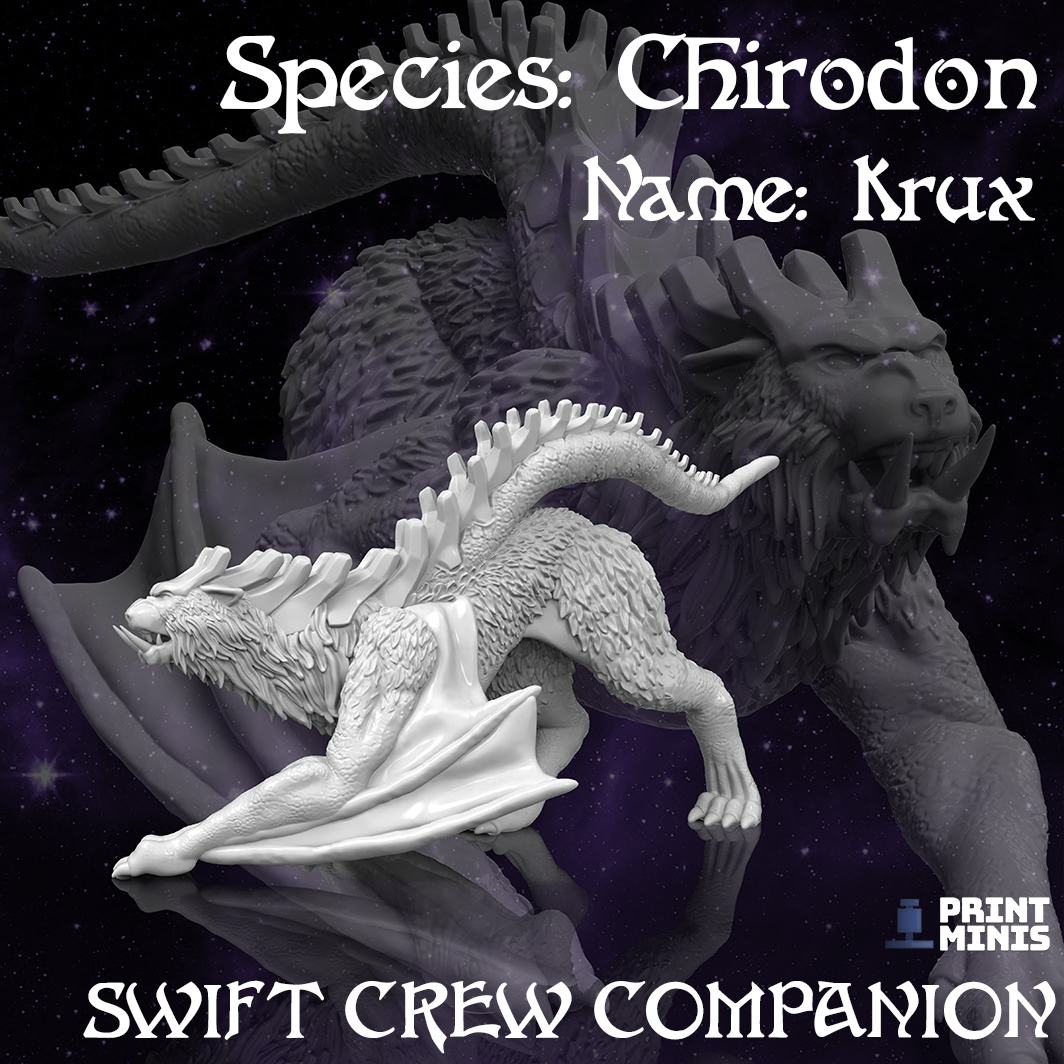 This modular pirate crew comes with 32 different pieces! There is a male & female torso, both robotic and flesh versions; a set of four different legs poses; four head options including an alien species and a helmeted model so you can have multiple troops; and then 22 different arm options with weapons & props. You can build a huge crew of space pirates with this kitbashing set! 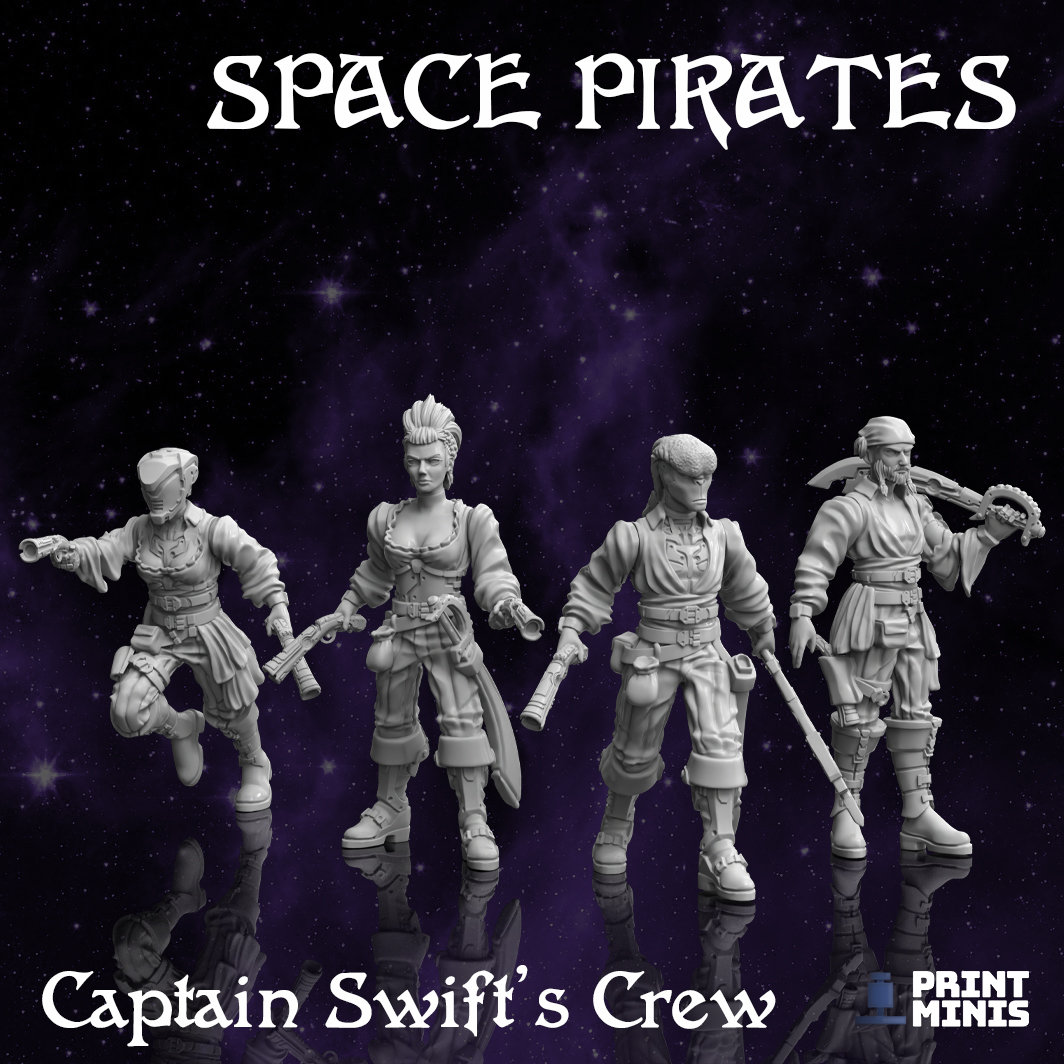 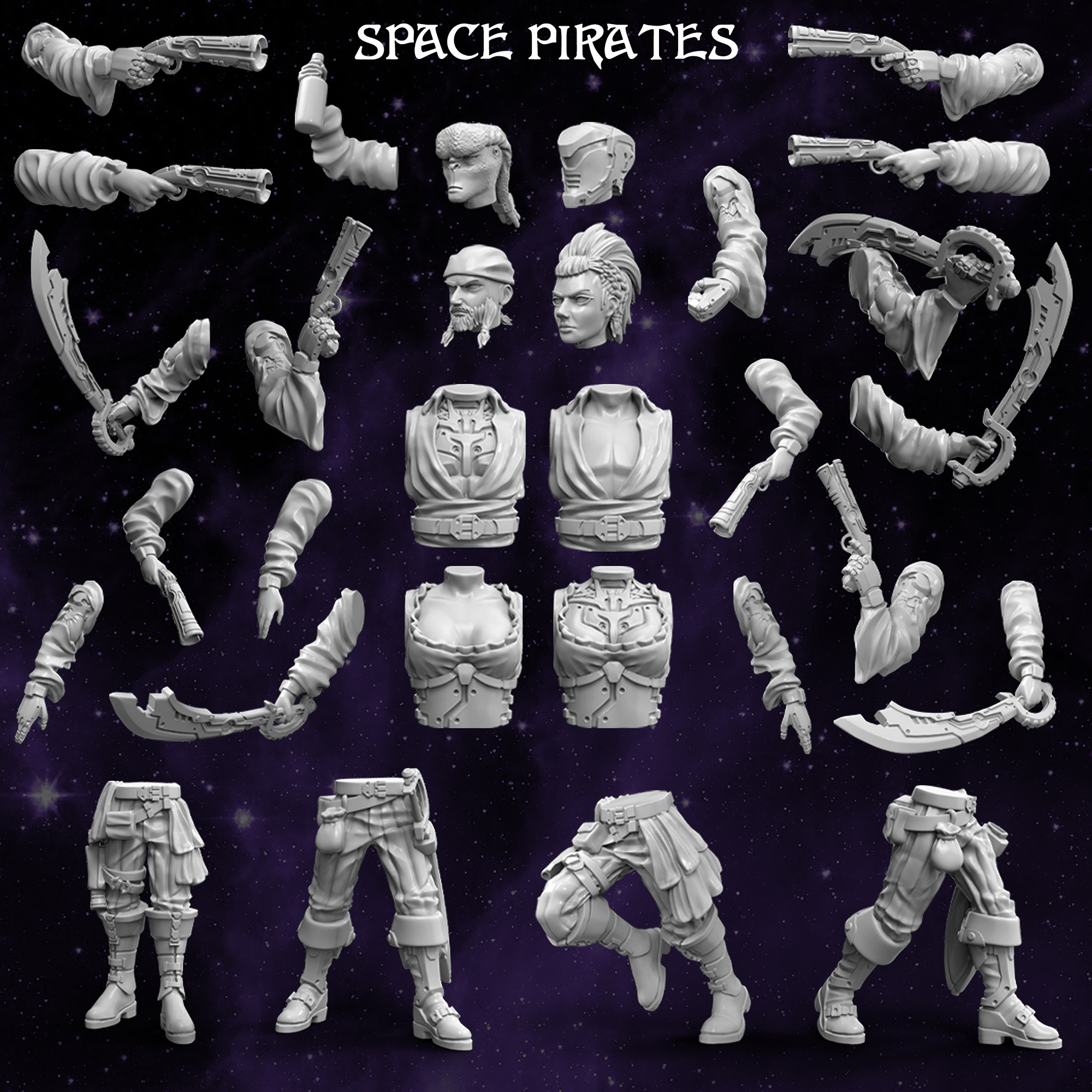 In order to move around their exoplanet efficiently to harvest various metal resources from the mining rigs, Captain Swift has a pirate skiff, The Black Marlin. It's speed is unrivalled as it moves quickly and silently above the dry ground of Aeox. It's hull can be filled with resources below deck and a couple of crew member can stand on top. In the case of an invasion of his planet, the skiff can also be armed with five different weapon options including double cannons!

To defend their pirate base and protect their valuable goods from looting, Swift also has a fleet of Piranha drones constantly circling the surface of the planet looking for signs of trouble. If an invasion happens, they can be summoned to that location instantly. Equipped with either cannons or a huge bomb, they're a terrifying little horde to encounter! 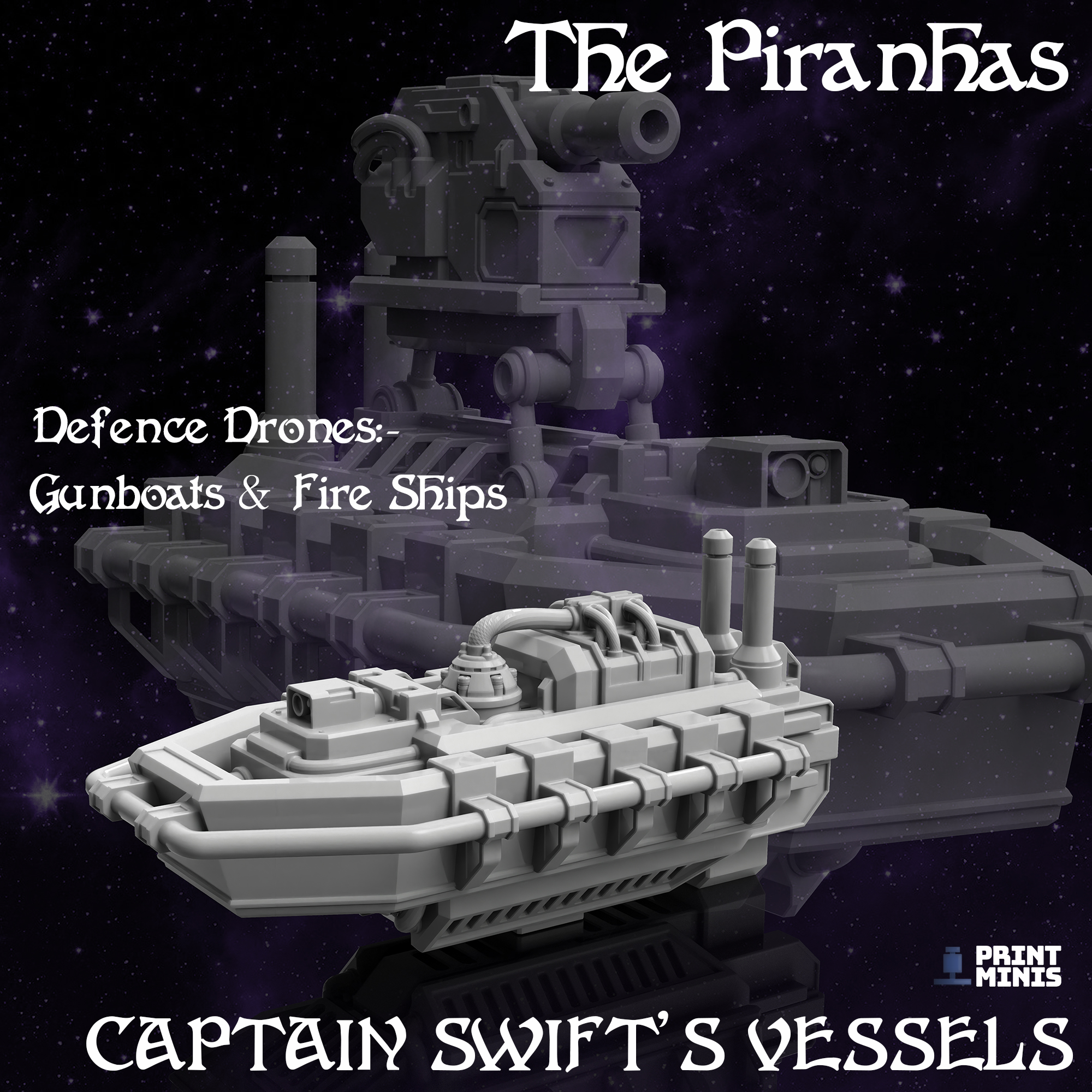 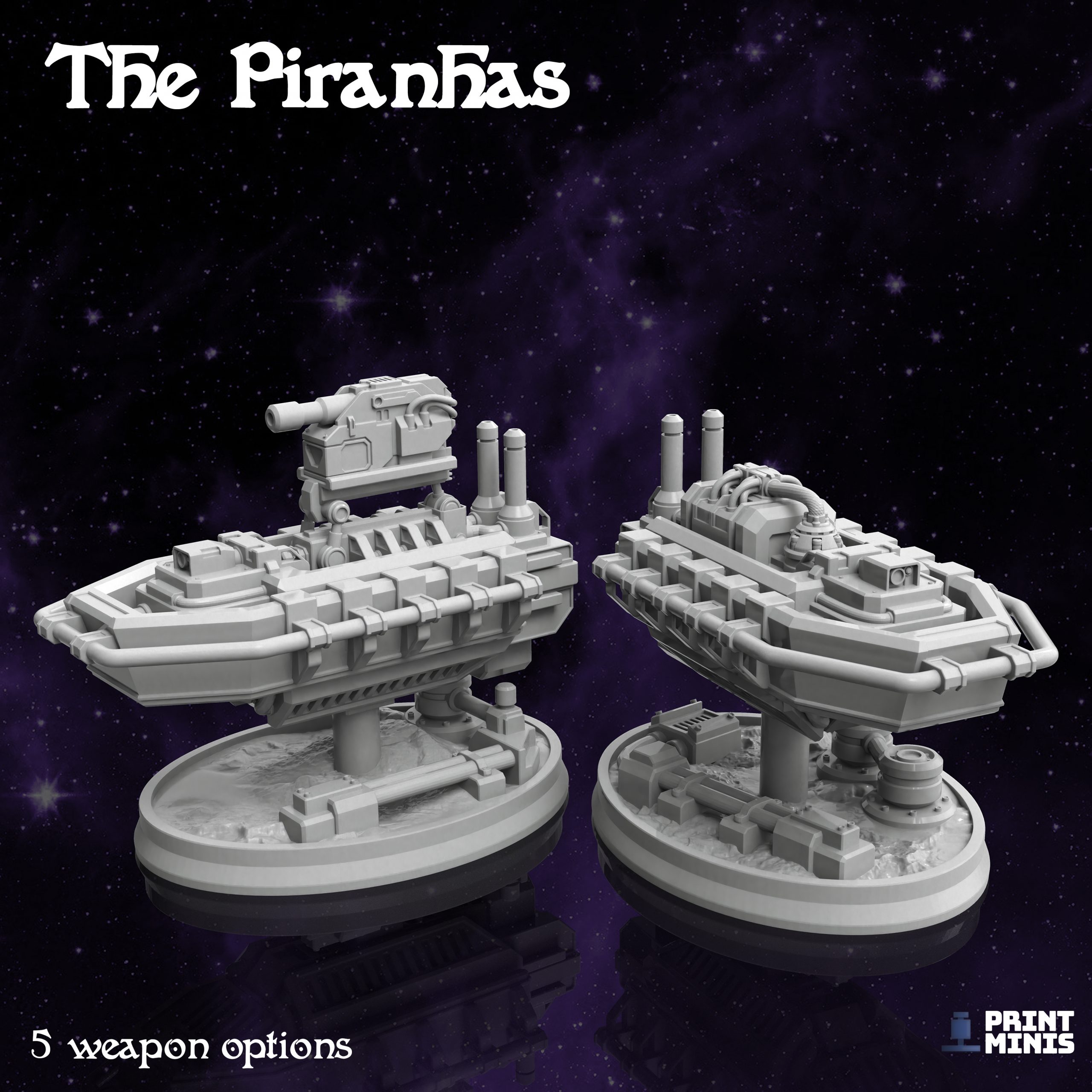 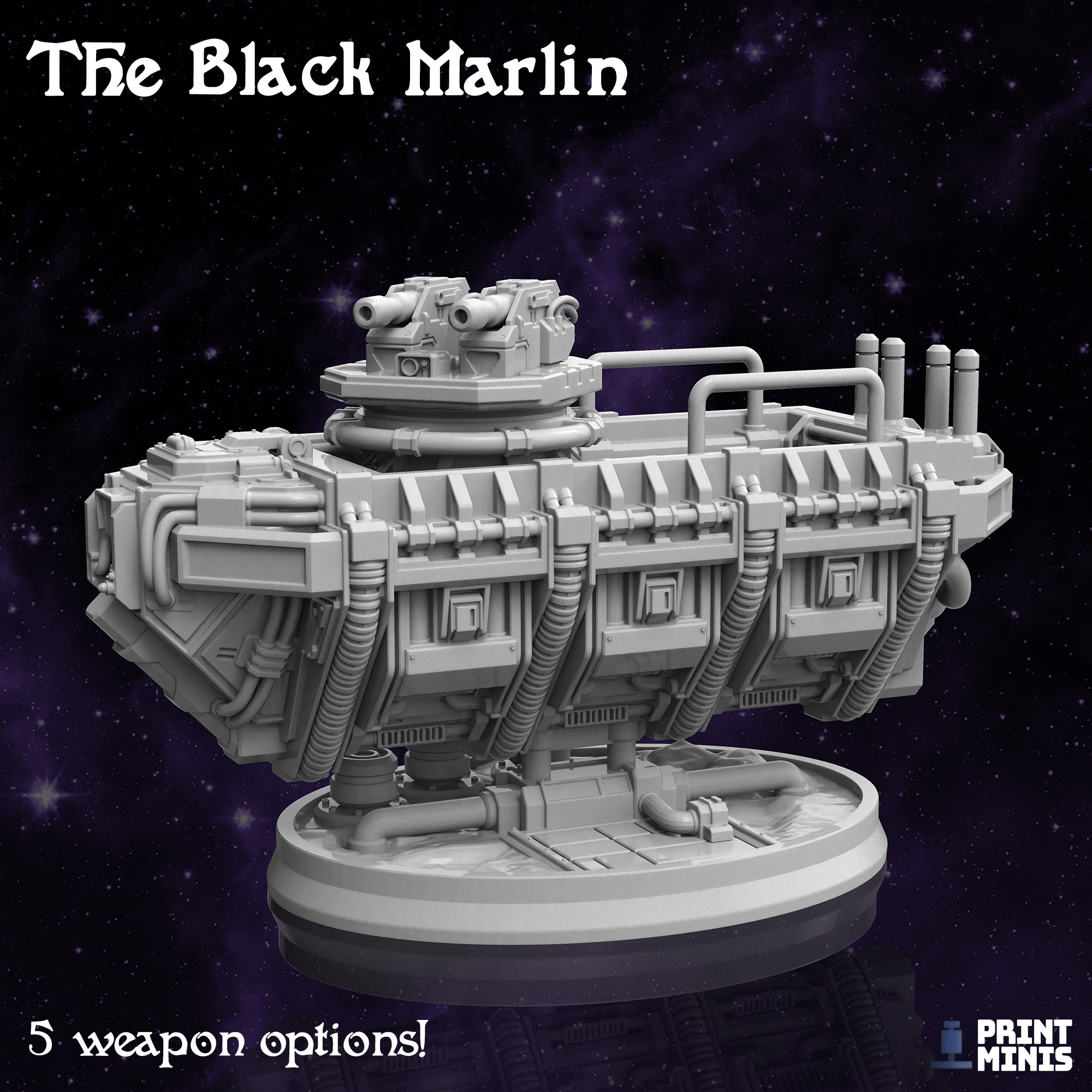 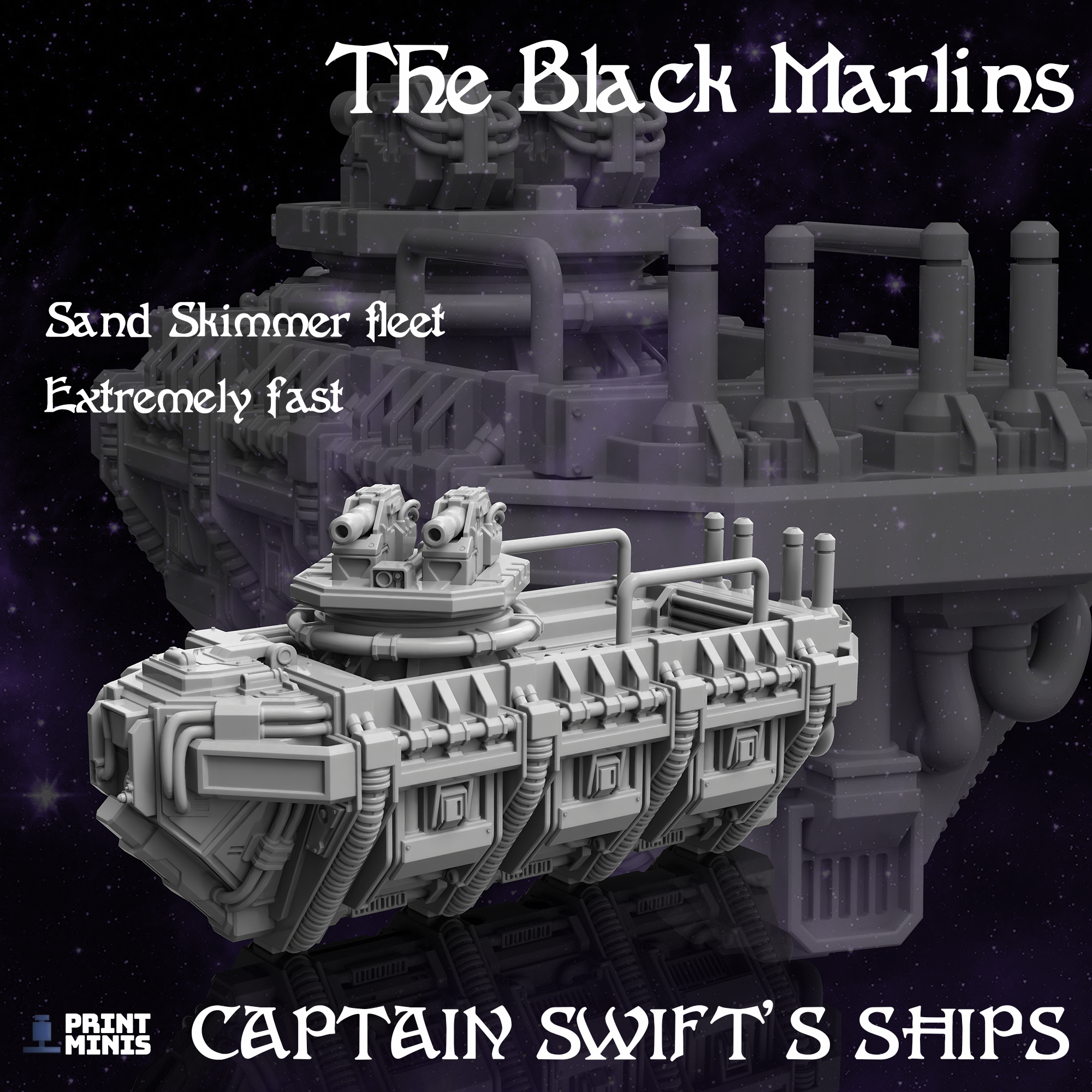 Join the community on our email list for free monthly minis!

From a young age, Carina had always wanted to join the military. She grew up on Calladus, a Military Planet that was established along with many other first wave pioneer planets. It used to be a thriving base, providing security to the nearby trade routes, but once new alien civilizations were discovered on the opposite side of the Milky Way, trade in the Local Spur stopped.

As a fully trained Military Officer, she'd only been able to enjoy her position for a few years before everything fell apart. Most of them were then made redundant and abandoned on their militarised planet. Taking things into her own hands, she rallied a crew and enough money to buy a ship. Then they took to the stars to make their own fortune.

Now, Navarro is the Captain of a fearsome crew that deals in black market alien weapons to other military planets. They'll also take mercenary work for the right price, and have built themselves quite the reputation among the other space pirates. 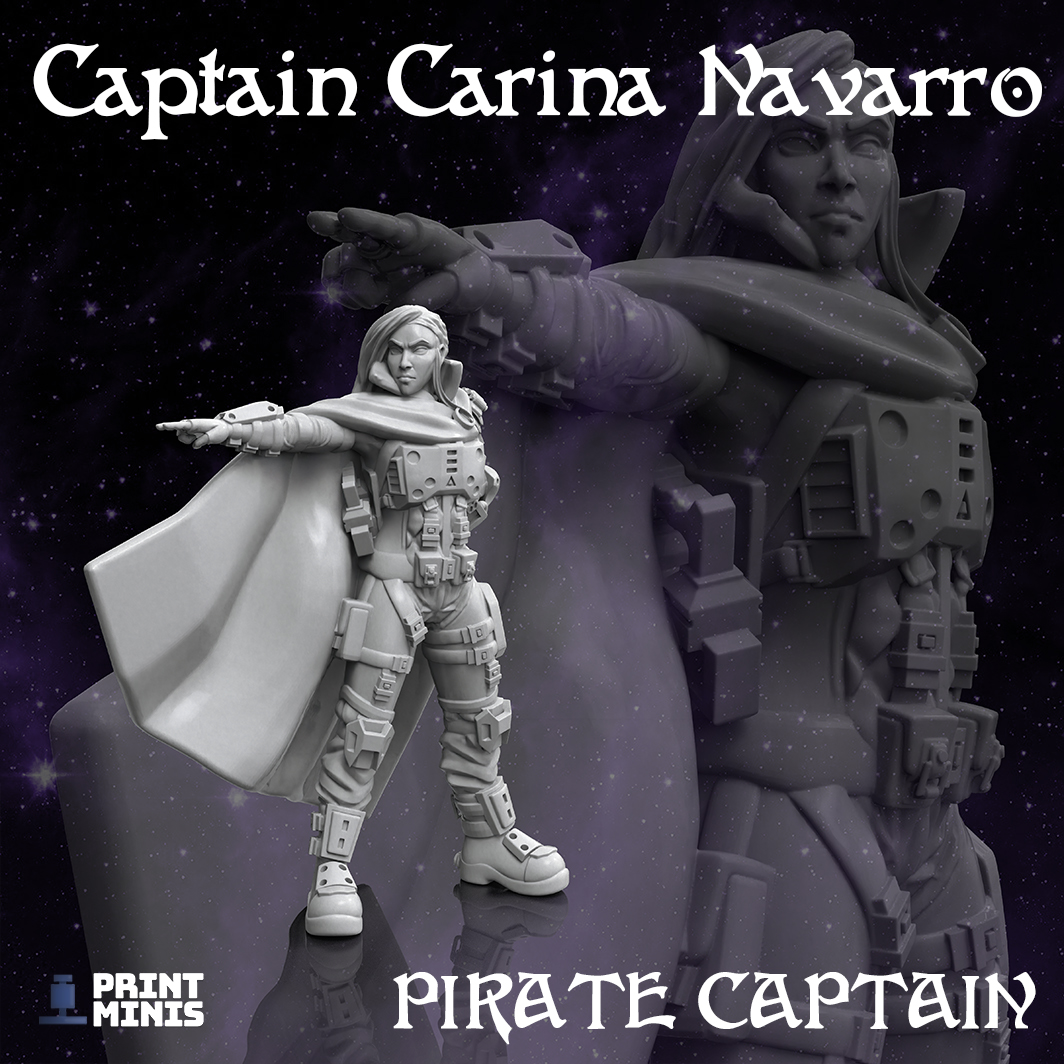 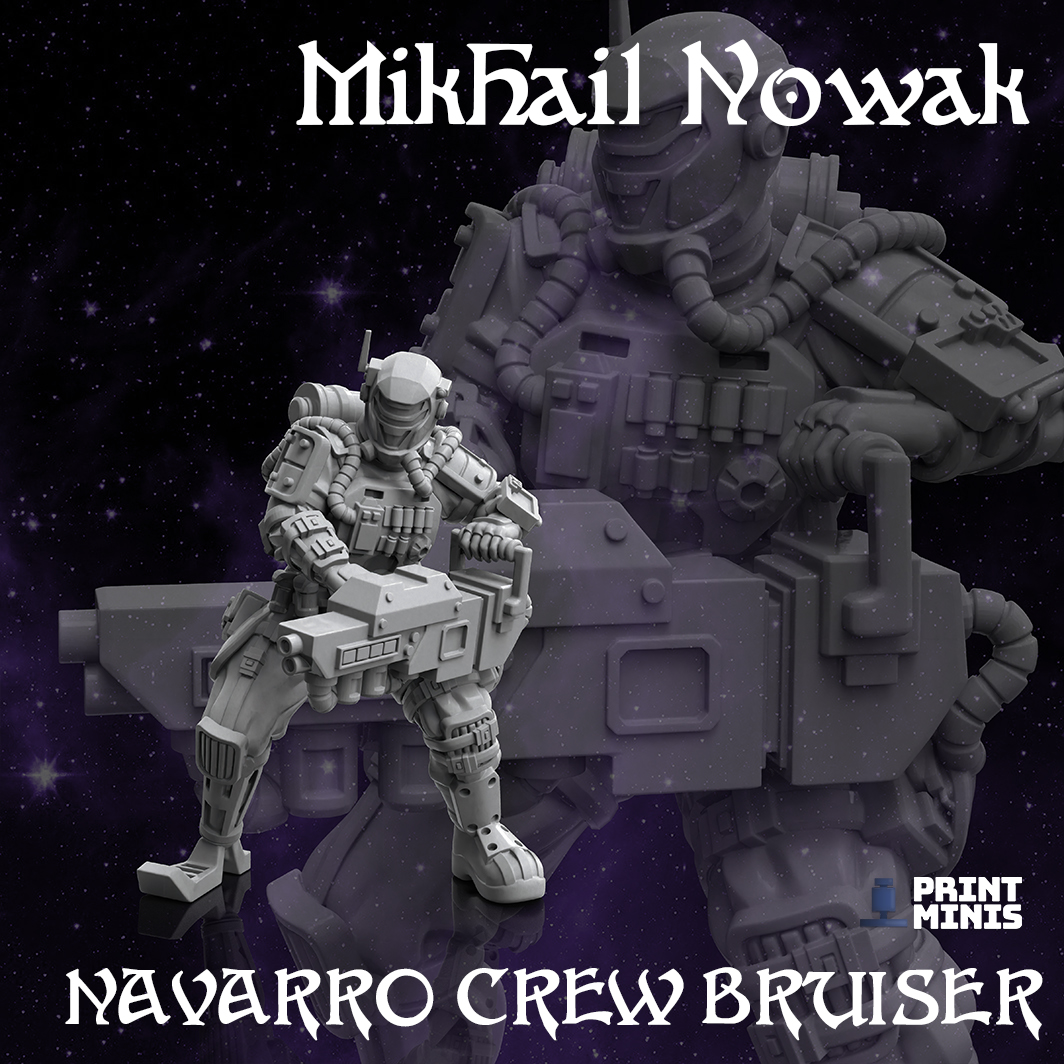 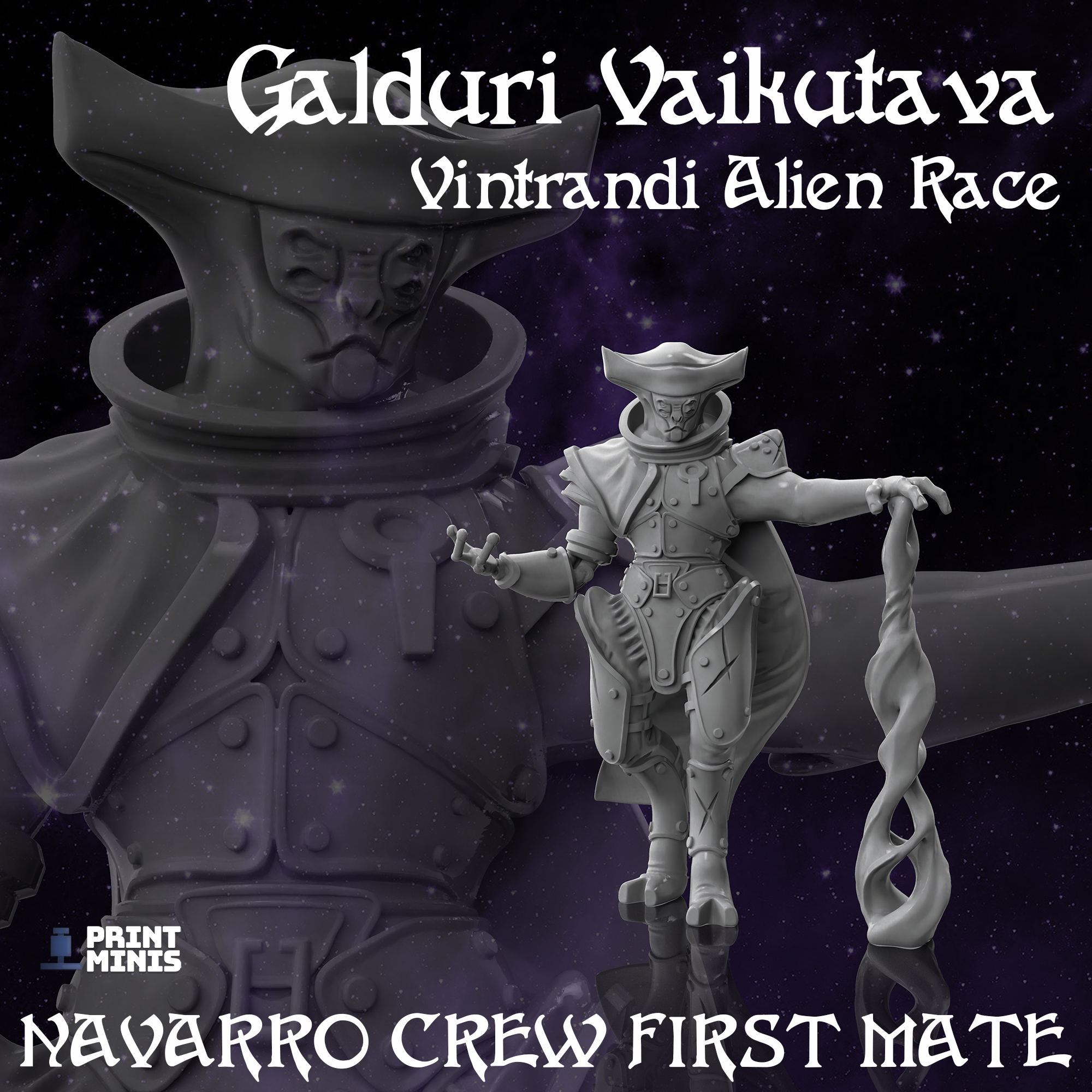 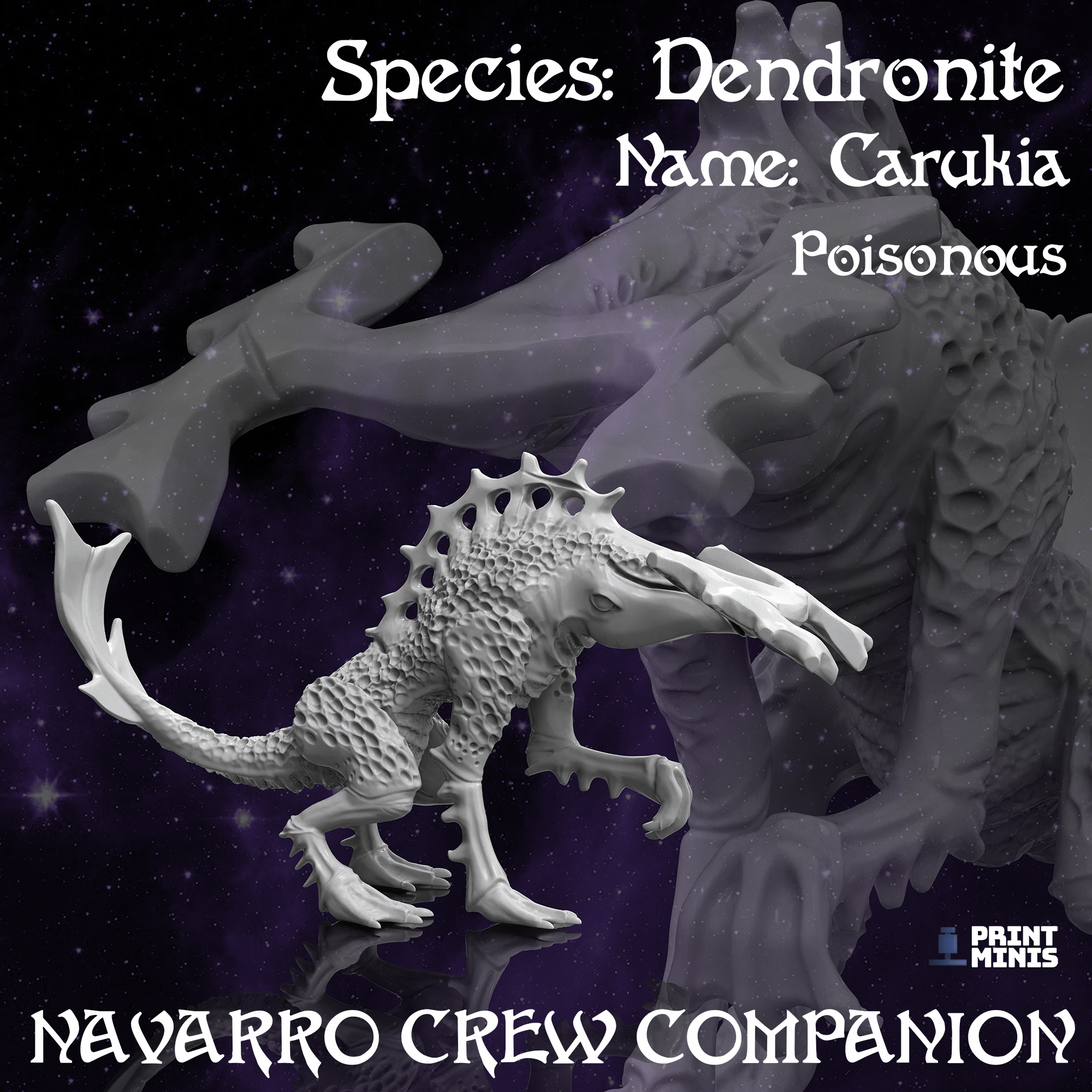 Another massive pirate kitbashing set! This modular squad comes with 28 different pieces! There is are two different male torsos; a set of six different legs poses; four head options including an alien species and a helmeted model so you can have multiple troops; and then 16 different arm options with weapons. These space mercenaries are a scary bunch once assembled! 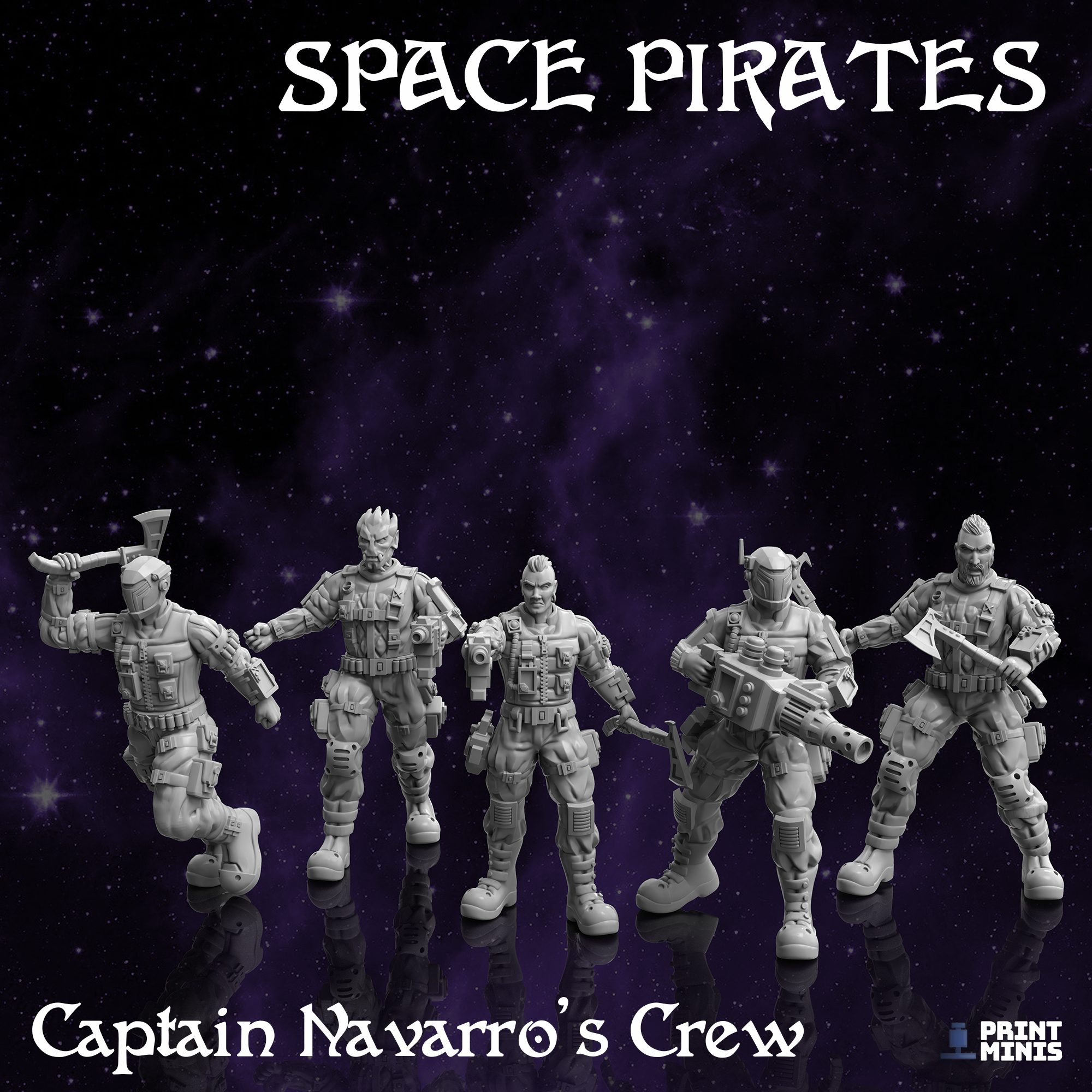 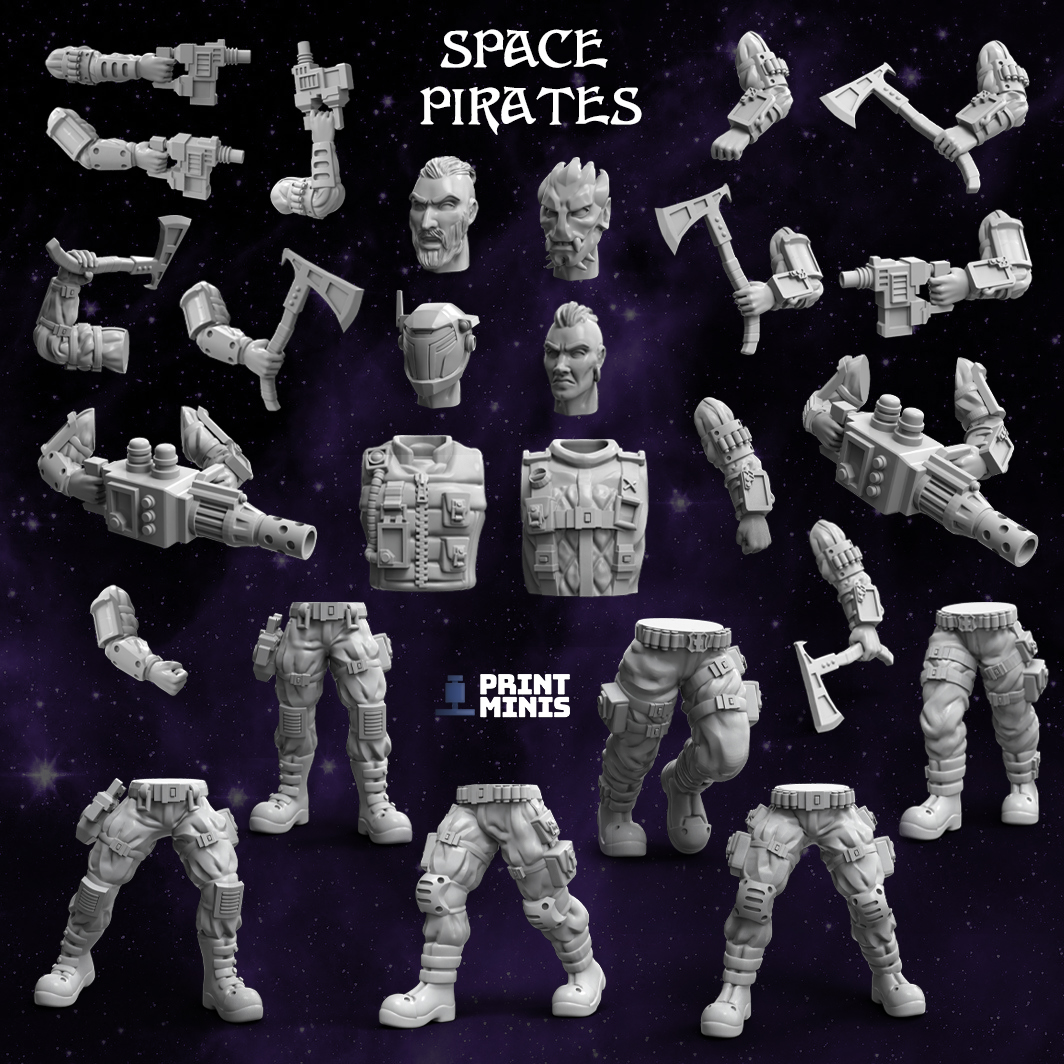 This huge modular space shuttle has a fully detailed, playable interior and consists of 26 different pieces. You can see photos of the ship 3D printed in resin on our store page here.

The Kodiak Space Shuttle belongs to Captain Carina Navarro, a space pirate, mercenary and arms dealer. When her home planet of Calladus was disbanded by the military, she formed her own pirate crew. The Navarro crew now make their money selling alien technology & weapons to military planets, and the Kodiak is an essential method of transport to get from their ship in orbit down to the planet's surface for trade.

The Kodiak is a reliable beast, with plenty of space on the inside for people and loot, and bristling with weapons on the outside in case things go south. This 3D miniature prints as many individual pieces on a resin printer, and is then assembled at the end. It has a detailed interior for gameplay, and four different accessories you can choose from to furnish it. 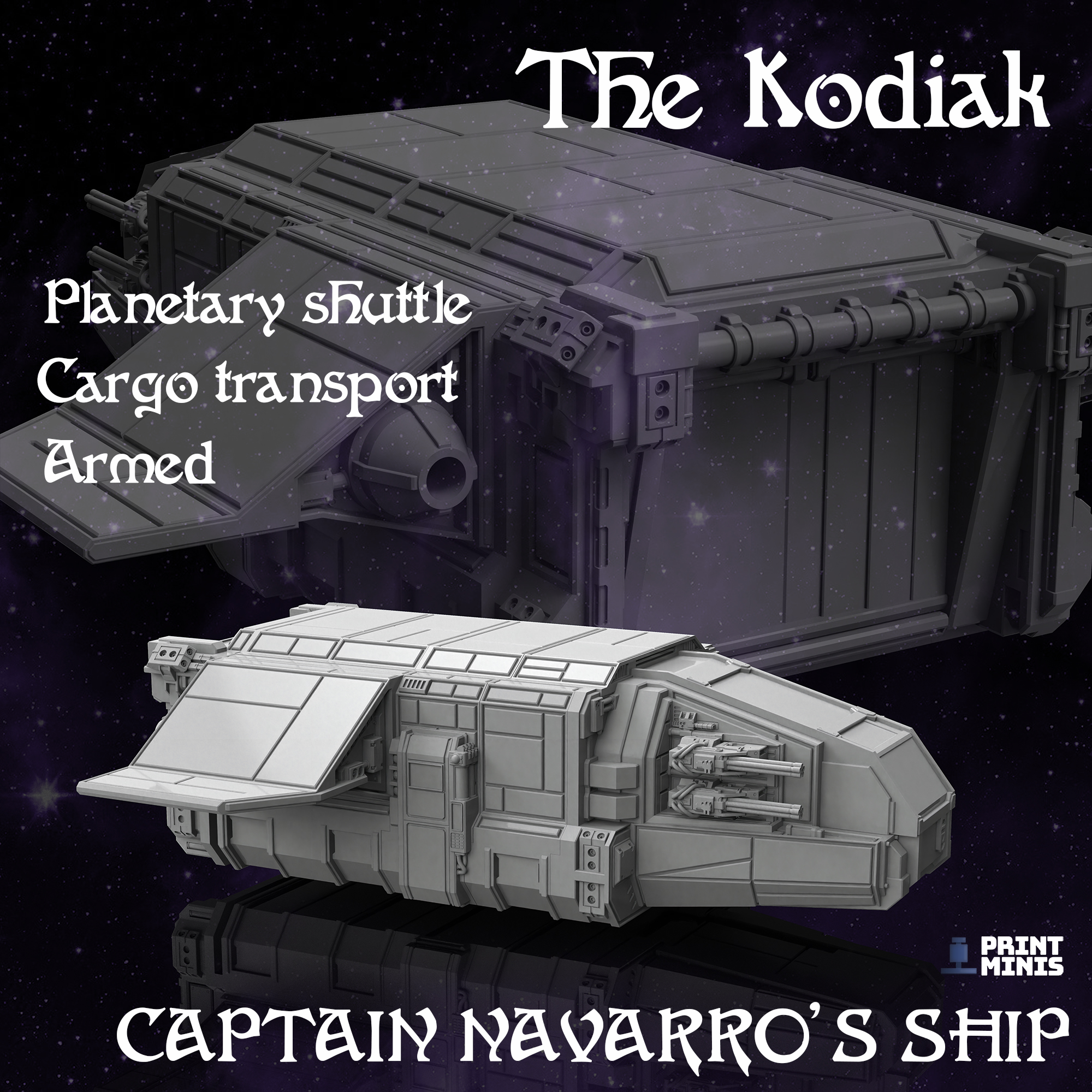 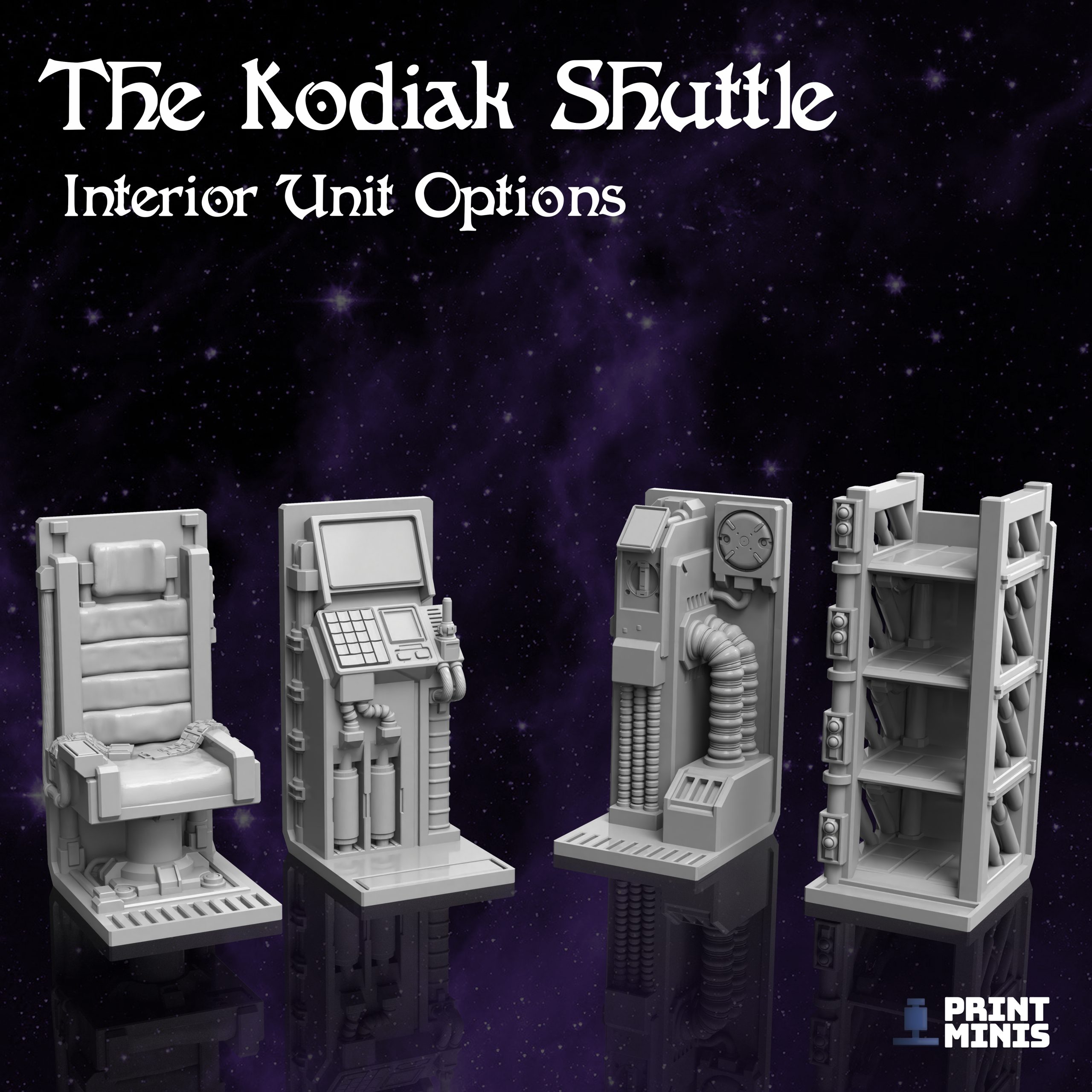 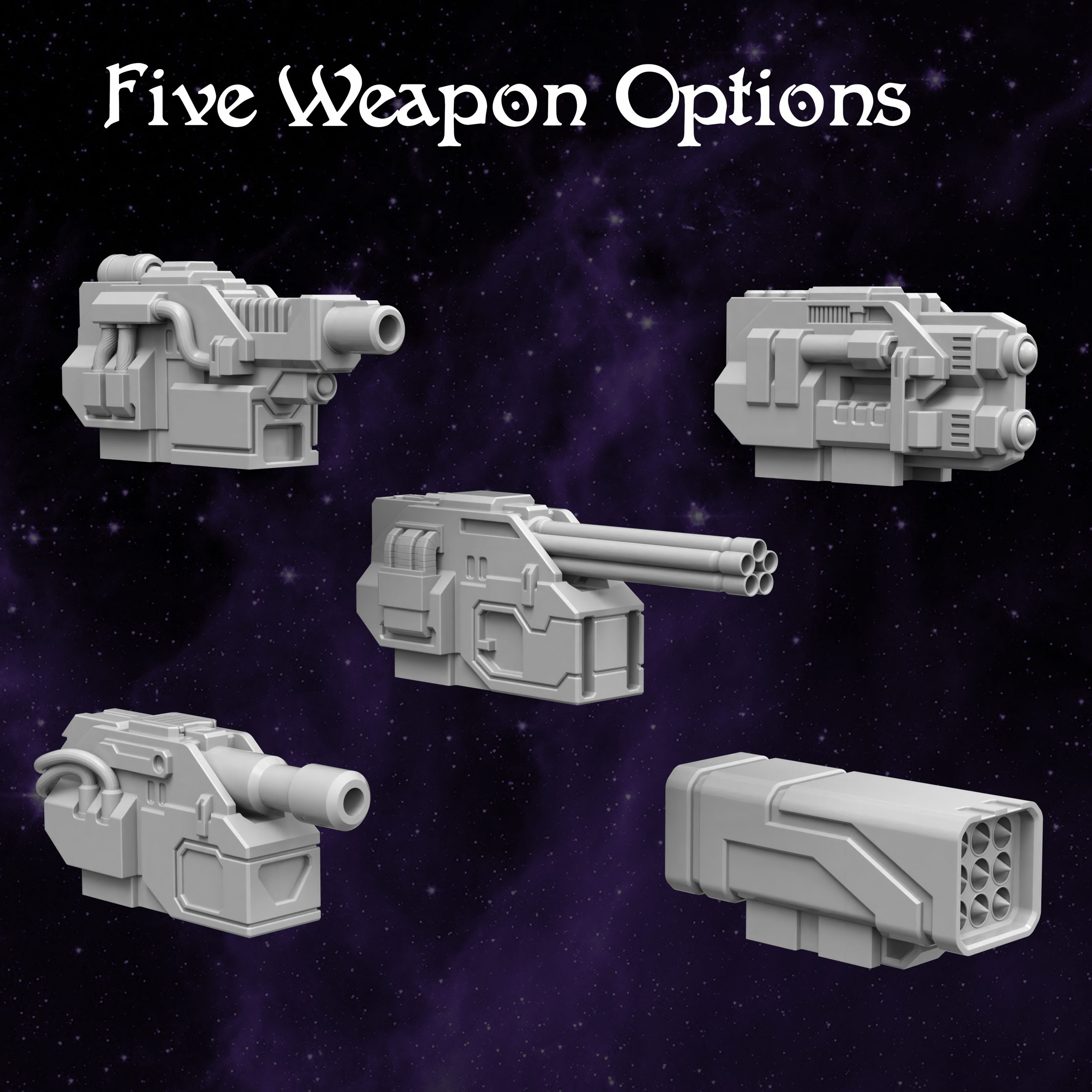 The Terrain and Bases

Our Space Pirates collection comes with a set of 20 scenic bases that represent the surface of the exoplanet, Aeox, which is an automated mining planet. It was deemed insufficient for hosting a colony due to it's dry arid climate, but was rich in metal resources, therefore automatic mining facilities were set up to extract, packaging and ship the metals to a warehousing facility in nearby space. From there, corporation freighters pickup the cargo as part of their monthly shipping rounds. 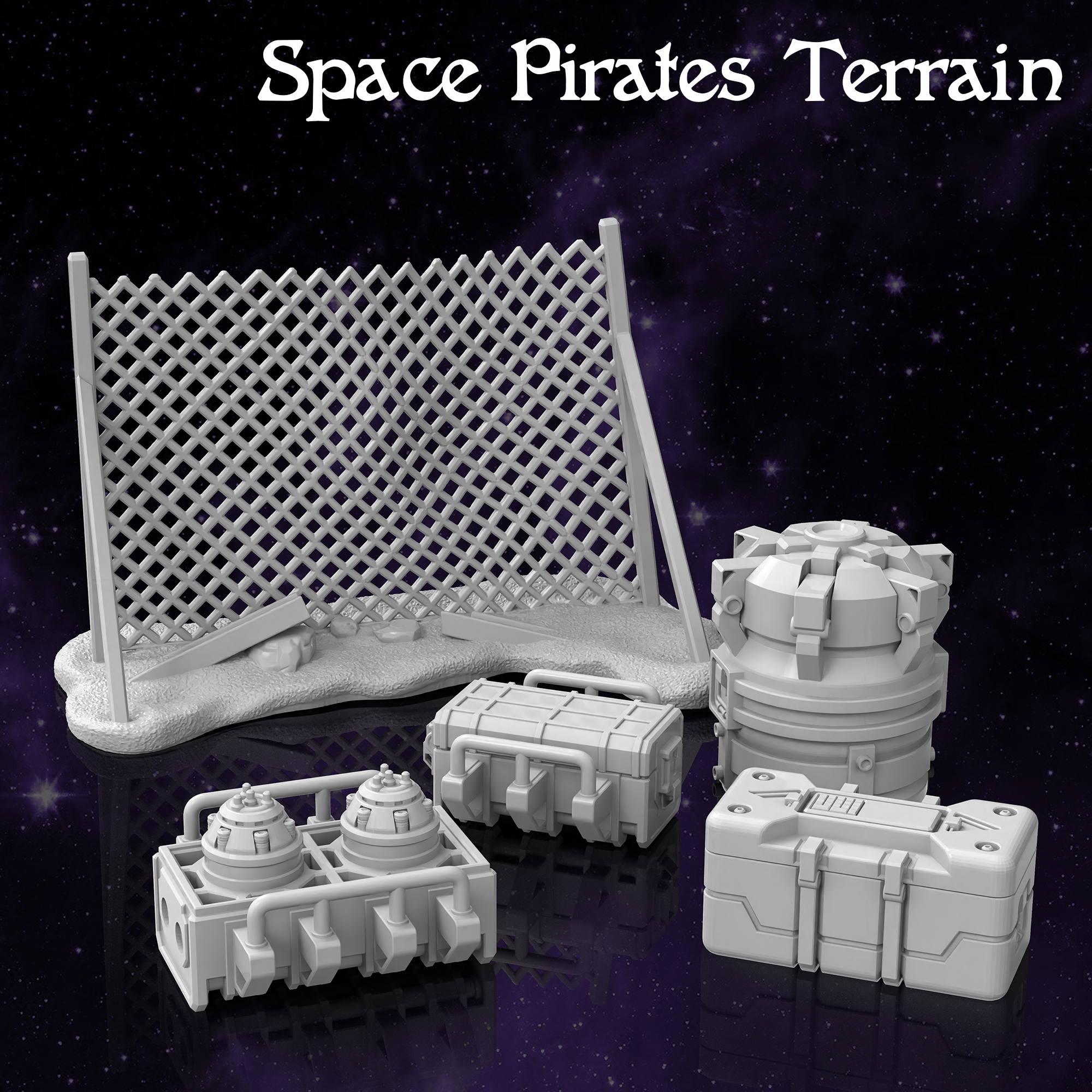 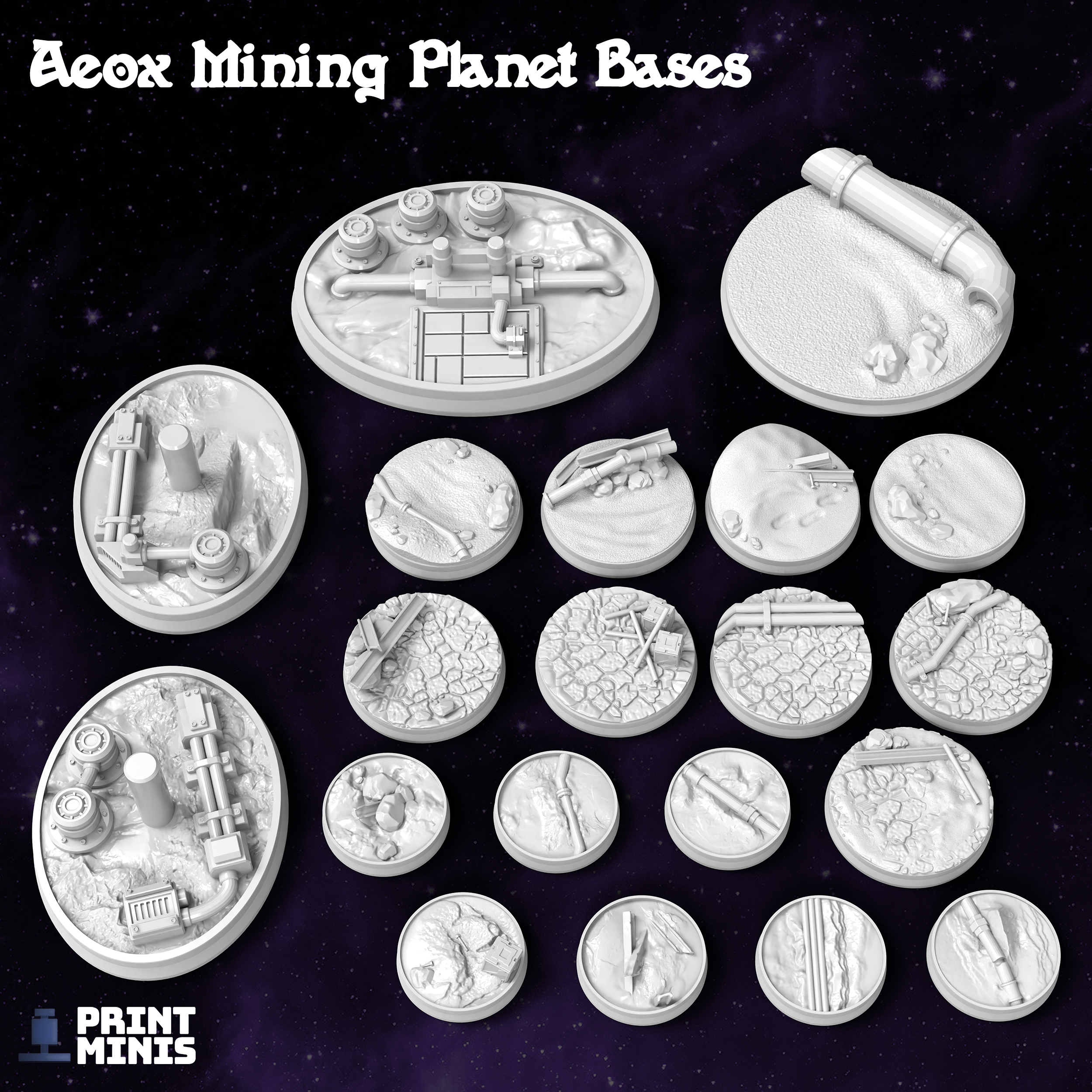