What's in the Dimozian Sands Collection?

Our Dimozian Sands set of miniatures are designed to be printed on an SLA resin printer. The collection contains 20 miniatures plus 18 scenic bases, available both unsupported and pre-supported. They are now available for just $10 if you subscribe to the Print Minis Patreon channel in June 2021. Check out what you get below:
Characters - 10

SEVERN characters from The Blessed sect, who believe in living in harmony with the desert and worship the might desert beasts:

THREE Well Divers from The Engineers sect who are never seen outside their pressurised diving suits. It is their job to protect and maintain the Wells.

The Armed Dust Stalker alien with a quad gun rig mounted to it's body!

Dimozia had once been a mighty desert city in the Southern Sands, before the space debris hit. Less than a fifth of the population escaped as the city was levelled and consumed by fire. The bombardment also disrupted the water supply, making their barren homeland even harder to survive in.

In the aftermath of this disaster, two different factions emerged. The Blessed believed the Great Burning was a sign that they should live in harmony with the desert, working in tandem with nature from now on. They leaned into old traditions, reviving the ancient art of Beast Taming which uses the young larva of the mighty Dust Stalkers to locate water sources. The adults are then used for transportation and protection, revered as sacred beasts. Adeleka leads the spiritual faction, with Kasiya the Beast Tamer as her second.

The other faction to survive were The Engineers led by The Commission. They decided to survive in the desert by conquering it through their technology. They live underground in habitation domes, and are never seen outside of their sealed vehicles or their pressure suits whenever they’re on the sandy surface. For them, harvesting and maintaining water is essential, and their core of Well Divers are greatly respected. The Well Divers excavate and maintain the Wells, protecting the Well Heads from any threat.

For decades, there was conflict between these two factions, as they disagreed on how to live in the desert and how to manage the water supplies. Skirmishes broke out every now and then, until one day, The Blessed and The Engineers mysteriously reunited their peoples. An outside influence seemed to have brought them together, and they now work diligently to rebuild the once great city of Dimozia.

Beasts alongside machines as one race, technology and the spiritual united. What caused this change or why they are now rebuilding after so many decades, no-one knows. The rest of the world can only watch as this strange shift occurs in the Southern Sands.

June's STLs are currently available on our Patreon channel - subscribe to get them for just $10!

The Blessed are thankful to the Sand Goddess for surviving the bombardment of their once great city. In order to reply her for sparing them, they live in harmony with the desert, seeking out natural water sources and working with the native wildlife. They are at one with the desert and respect it, following the old traditions of Beast Taming to survive. 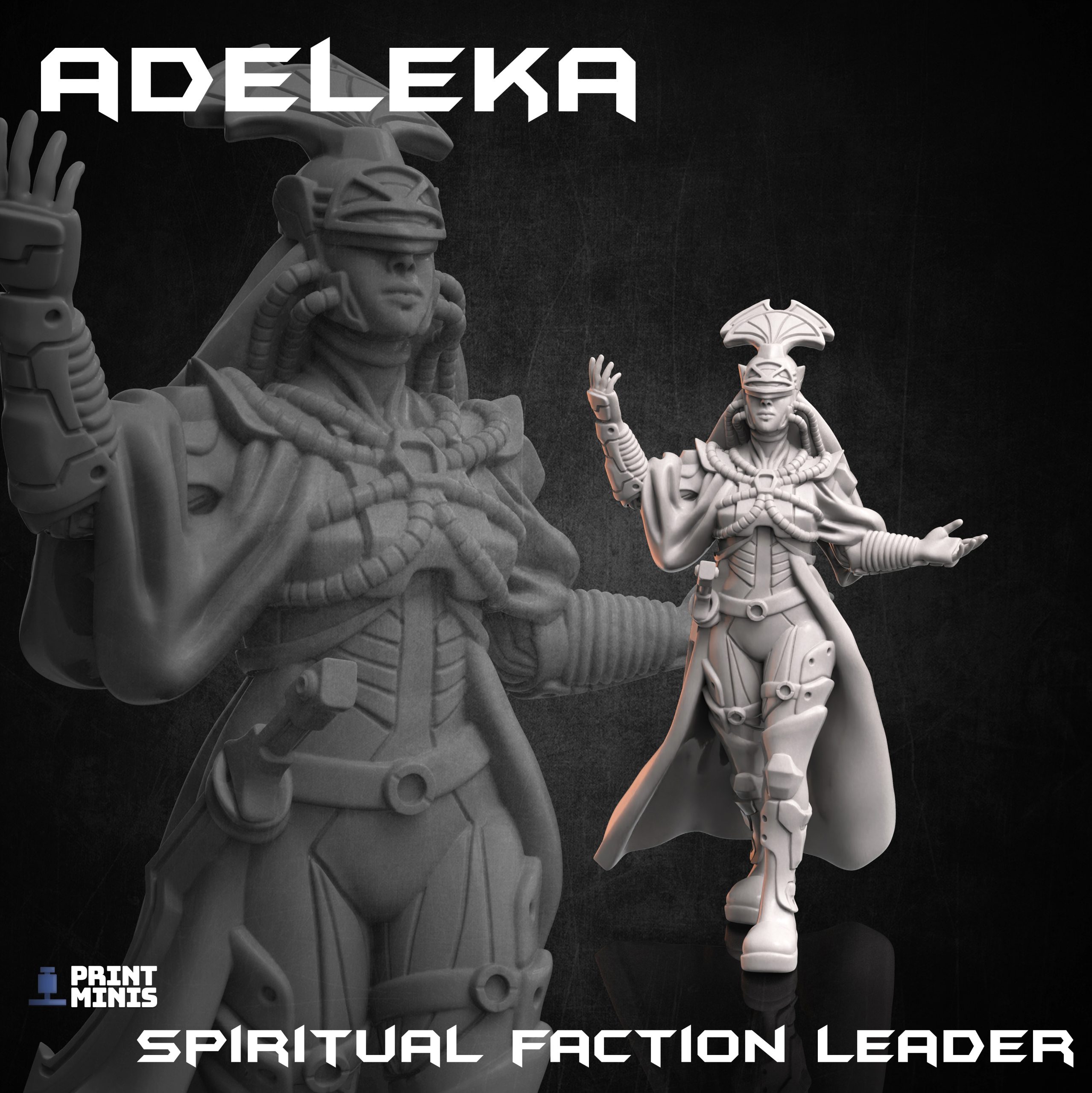 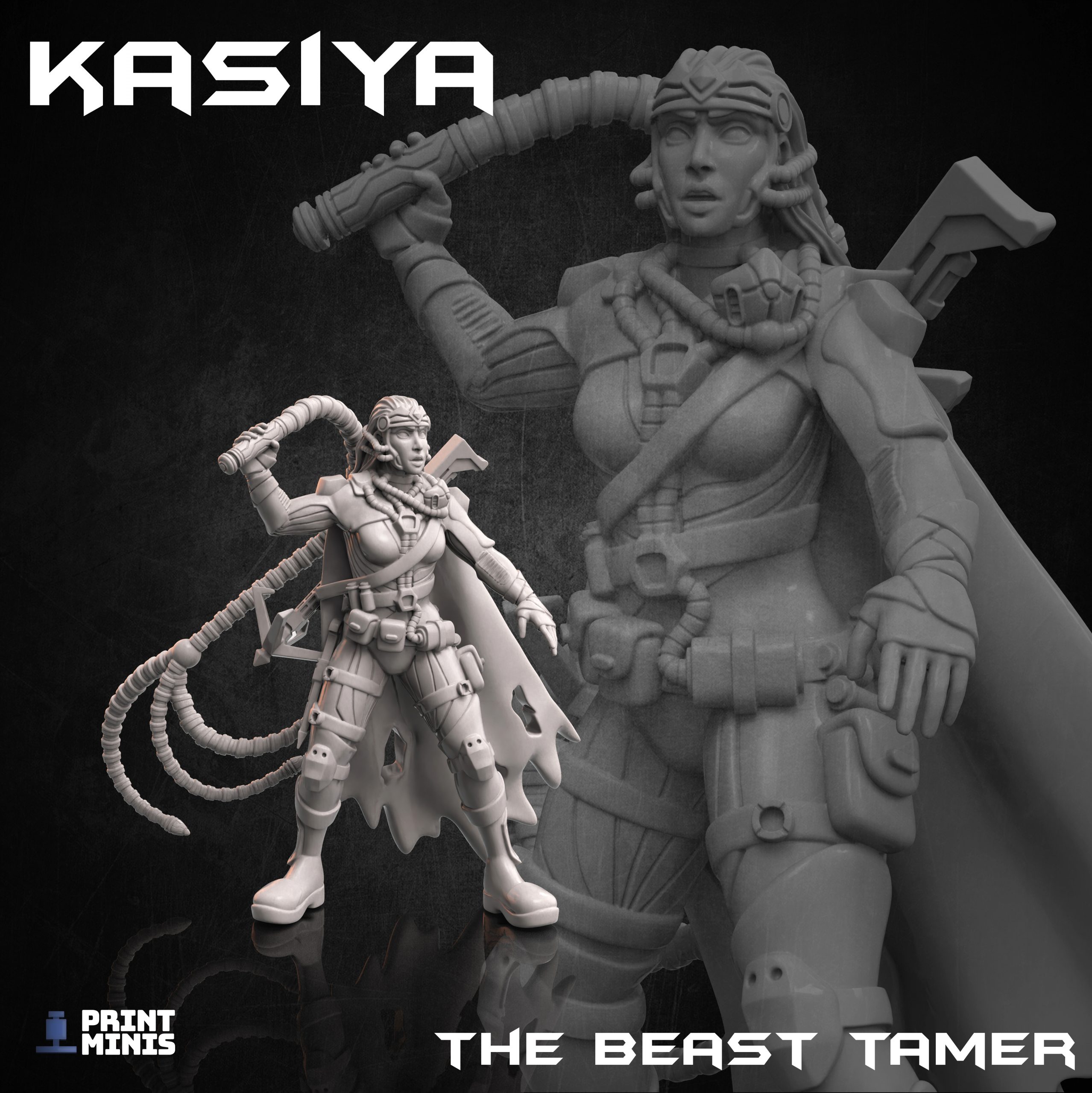 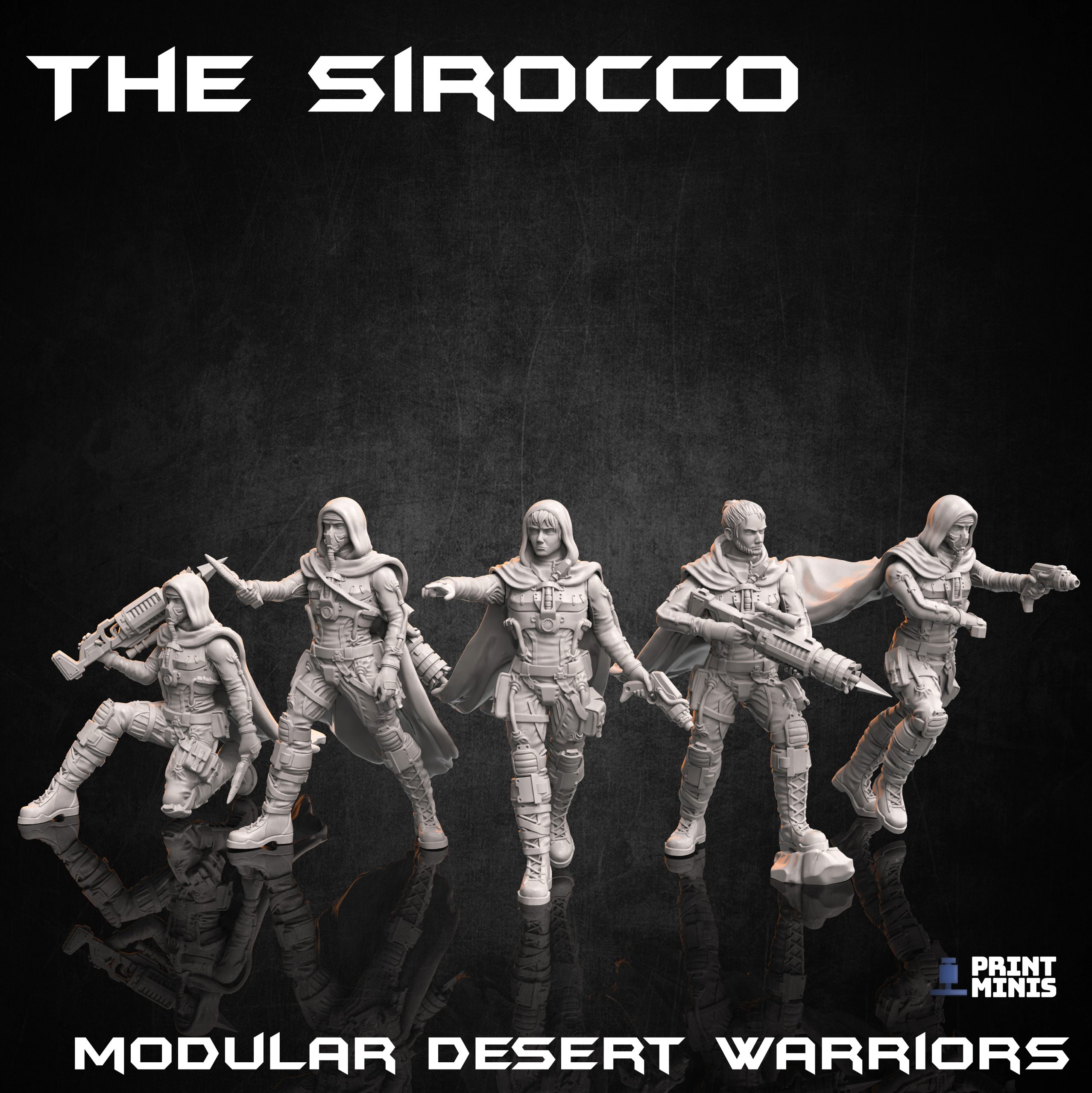 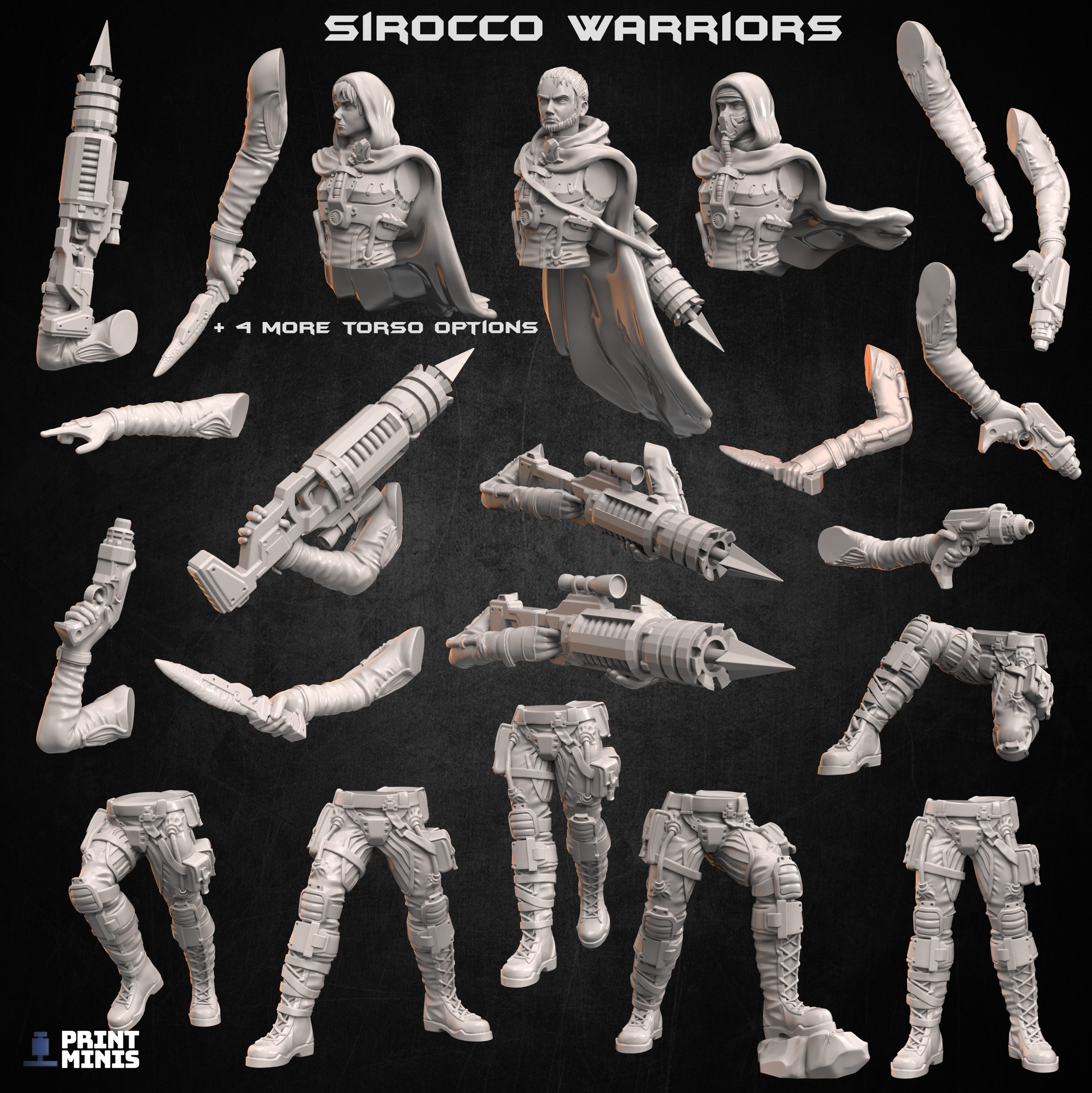 The Southern Sands are a harsh environment, burning hot during the day and cold at night. Since the Great Burning, water is harder to locate. However the Dust Stalkers still continue to thrive in this searing world. It takes 20 years for them to reach their adult size and while they are in their larval stage, The Blessed tame them to work with humans and even arm the adults for war, should things come to that. 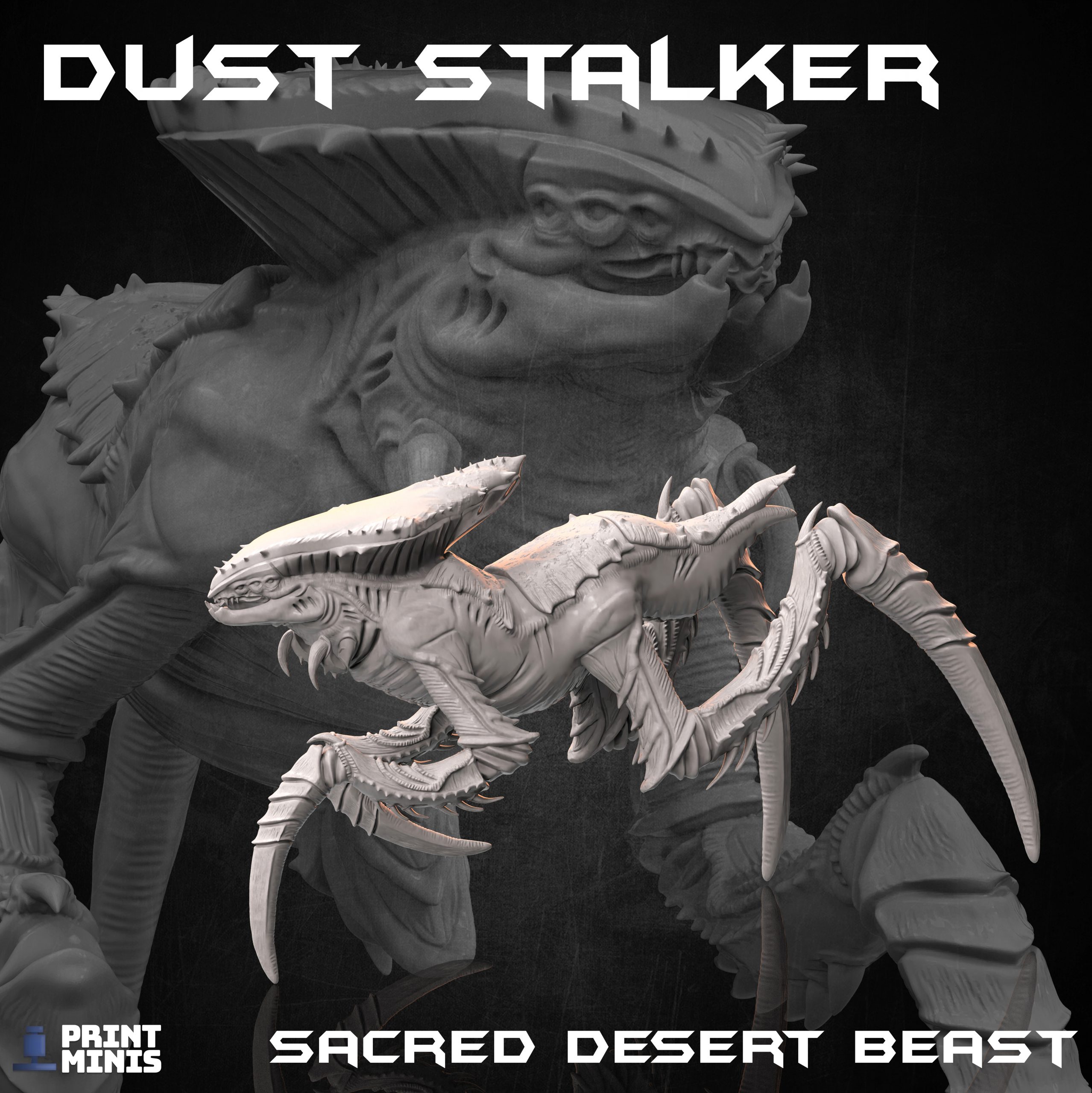 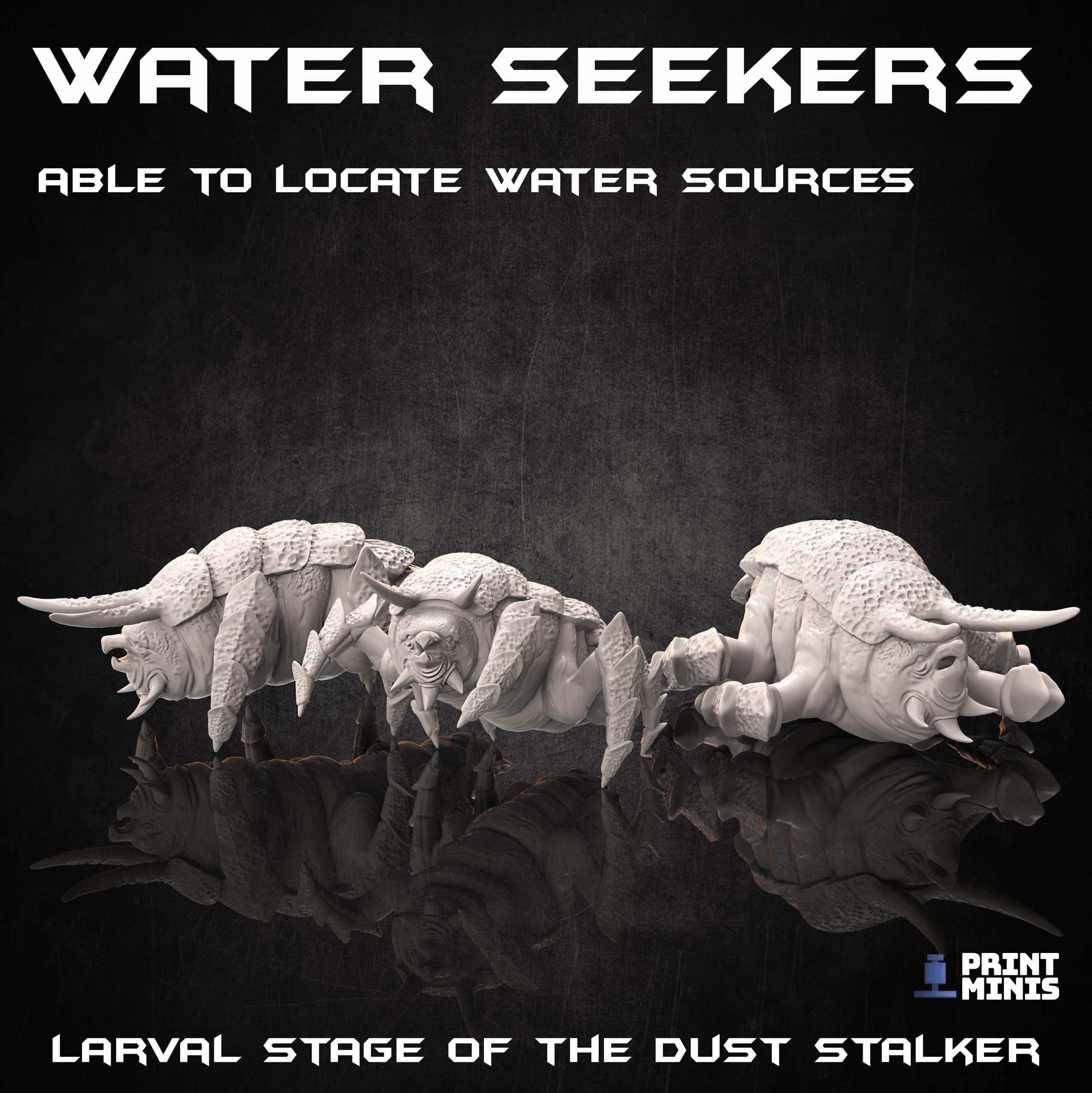 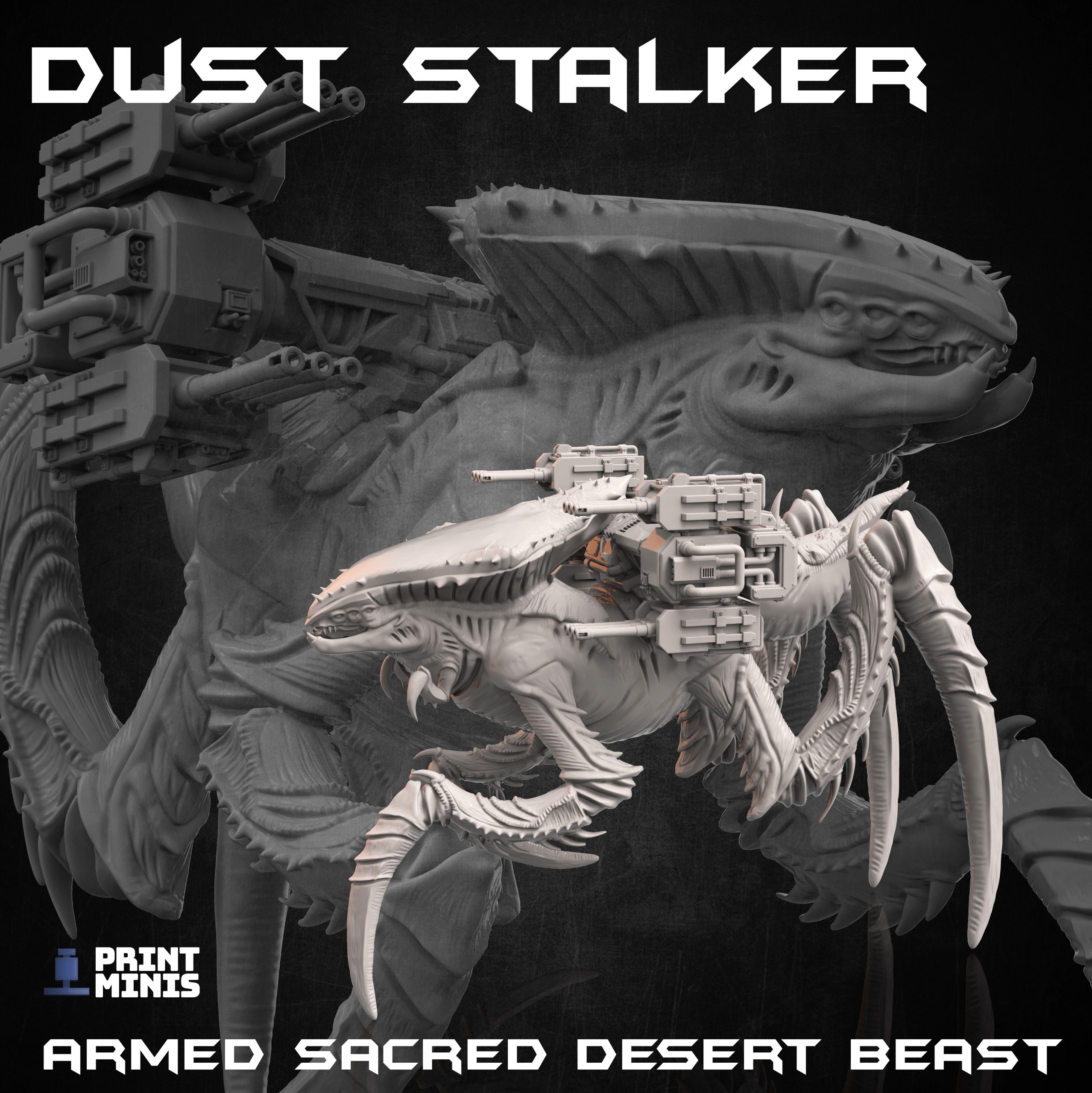 Join the community on our email list for free minis!

After the disaster that levelled their city, The Engineers leaning into technology, developing their homes deep underground to avoid the burning desert sun. They farm underground and use the water syphoned from their great wells to irrigate and sustain their community. The most respect of their kind are the Well Divers who locate, dig, maintain and defer the Water Wells. 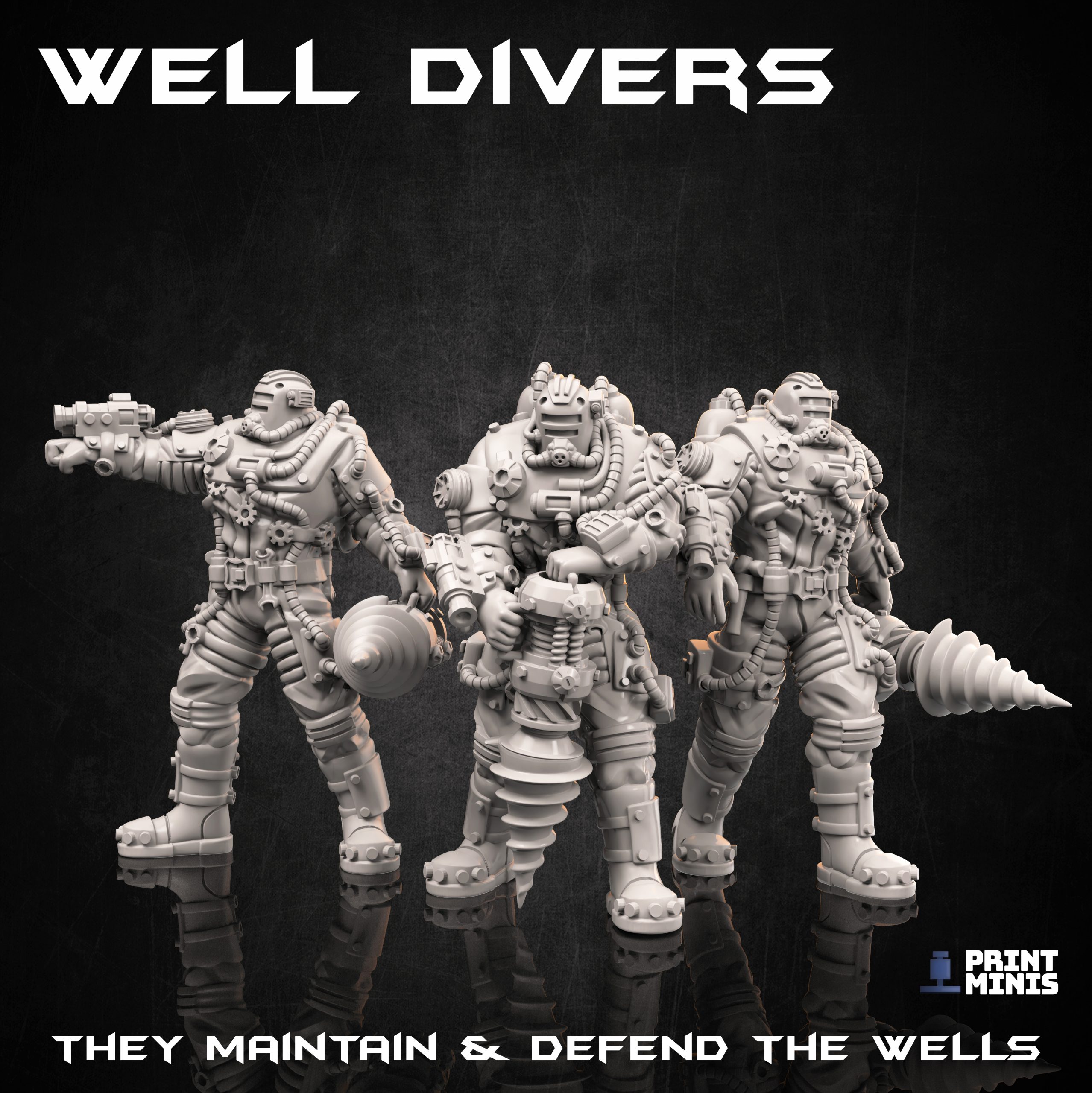 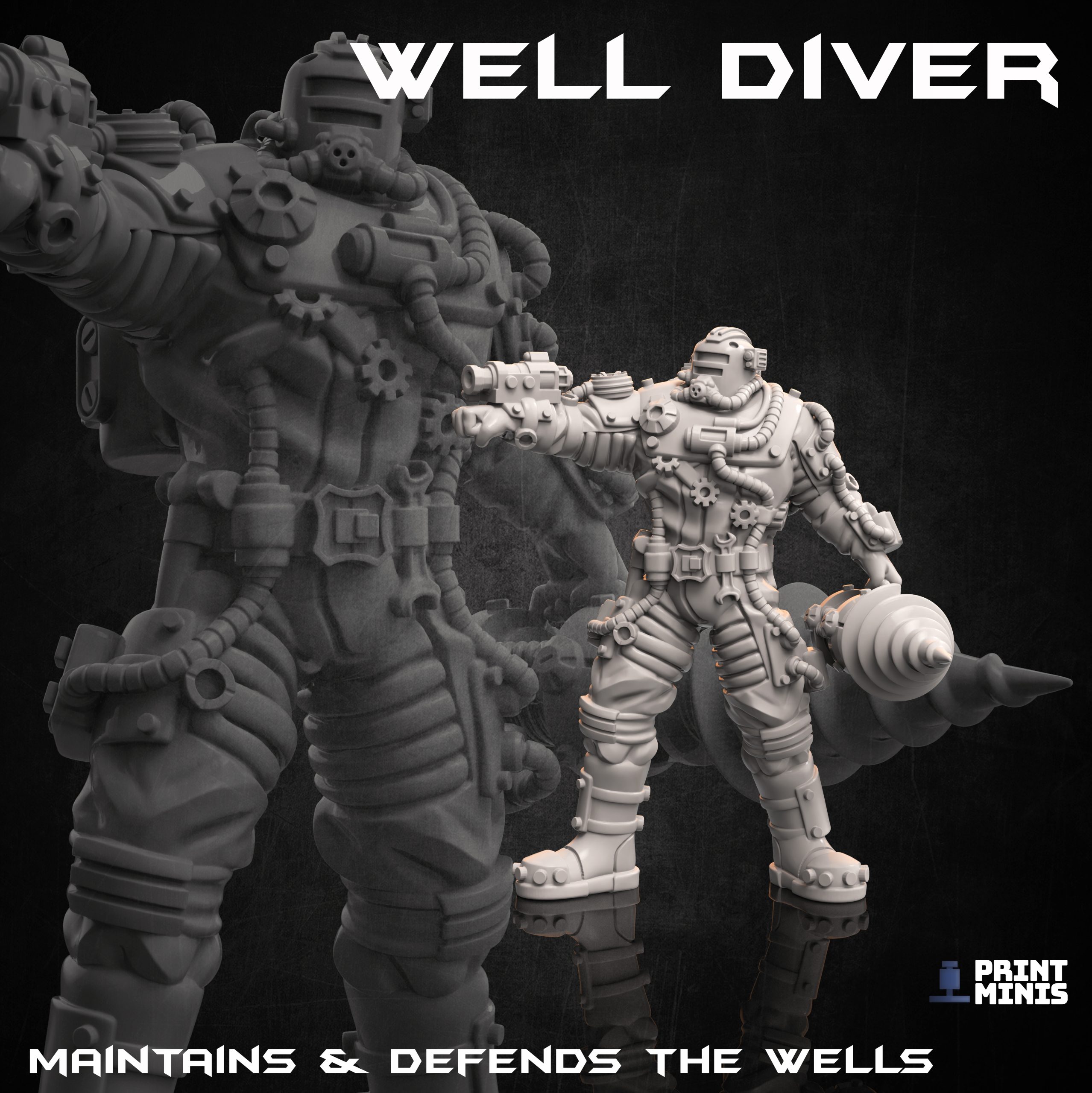 Building and maintaining the wells takes a lot of work, and in order to help them, The Engineer's have built state of the art Desert Runner vehicles. They carry important equipment back and forth to the wells including a massive ground drill, as well as transporting water. They can also be fully outfitted with weapons if they ever need to be used for defence, and are heavily armoured. Plus, the air conditioning makes them the perfect vehicle for travelling across the hot desert plains! 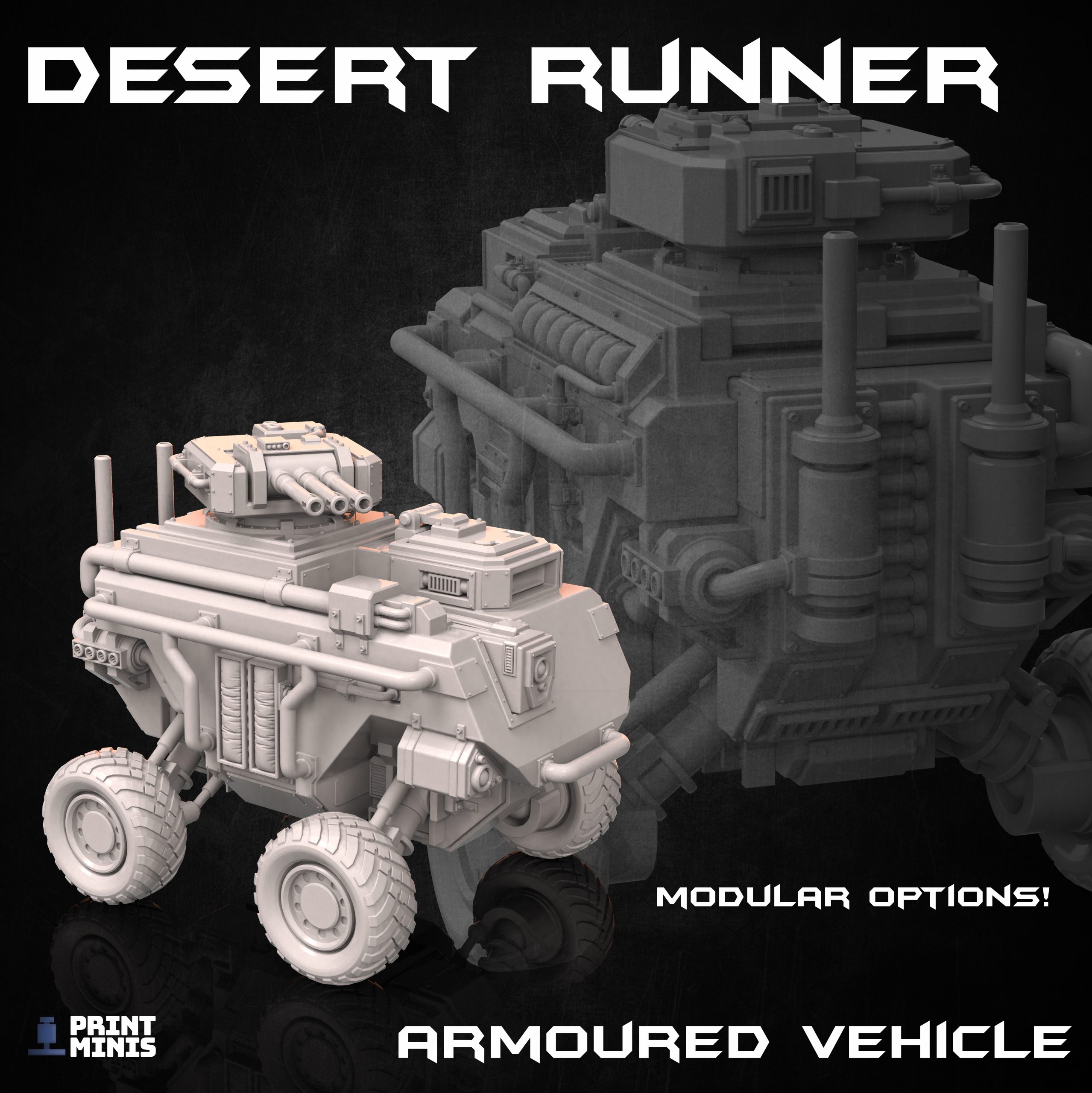 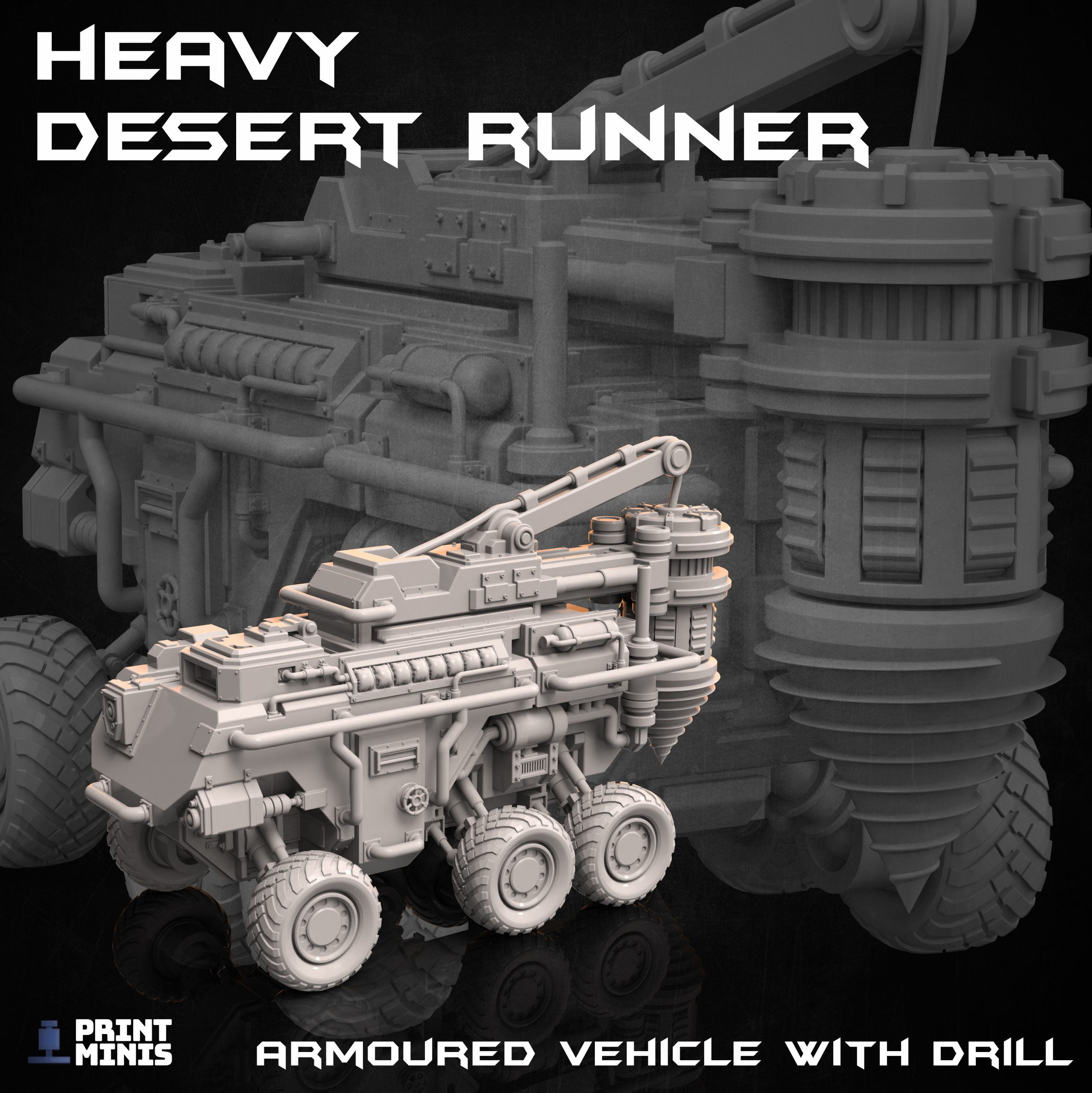 Buy these pre-supported stls on our Patreon channel now

In order to build up the Southern Sands desert environment, and to help integrate water as a huge part of the new combined community of Engineers and Blessed, we've added the well head & water tower as part of this month's terrain set. Fully modular and customisable, you can create a fully operational water extraction and storage facilities. It could also be a great objective for defending in a tabletop battle! 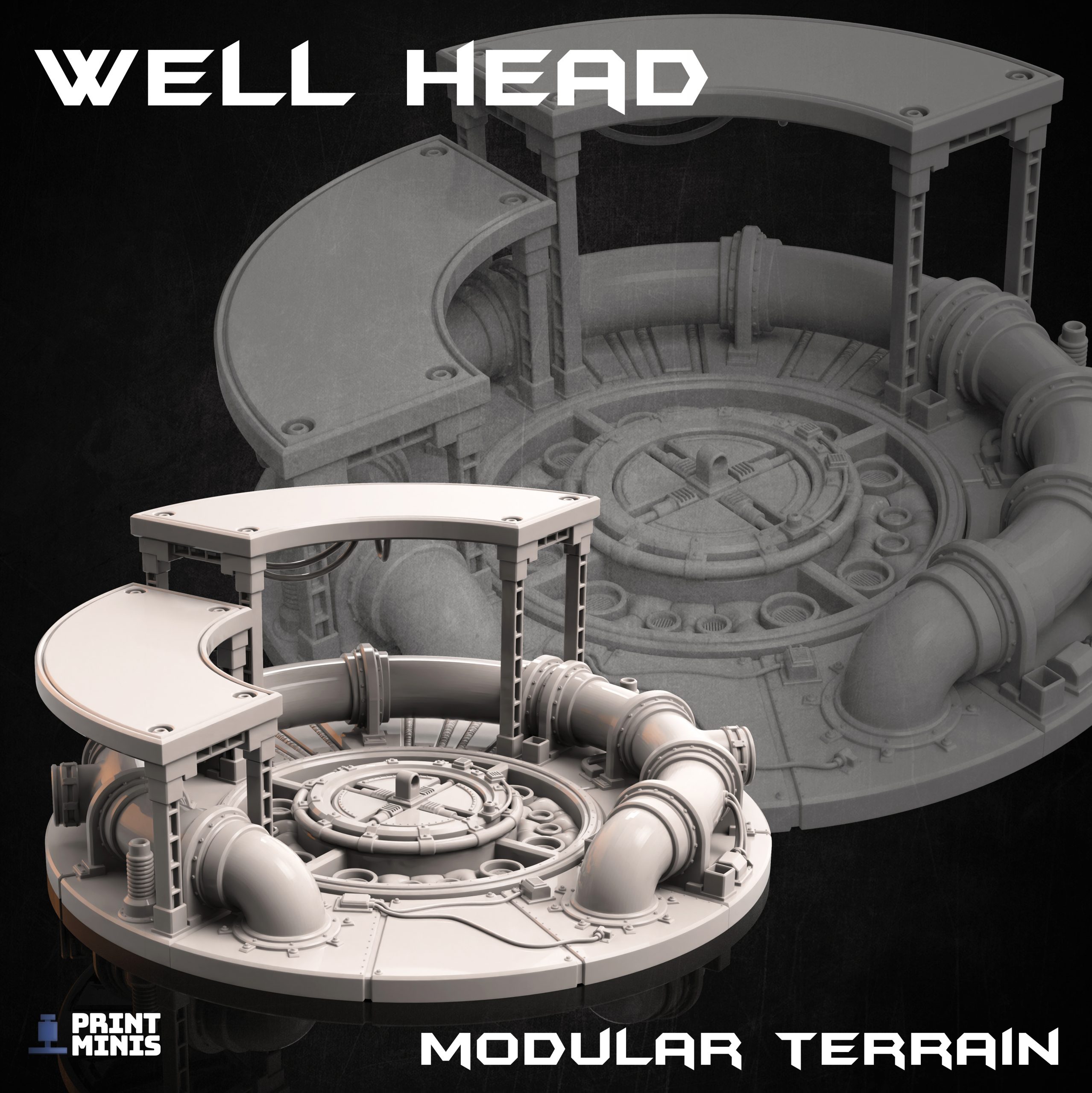 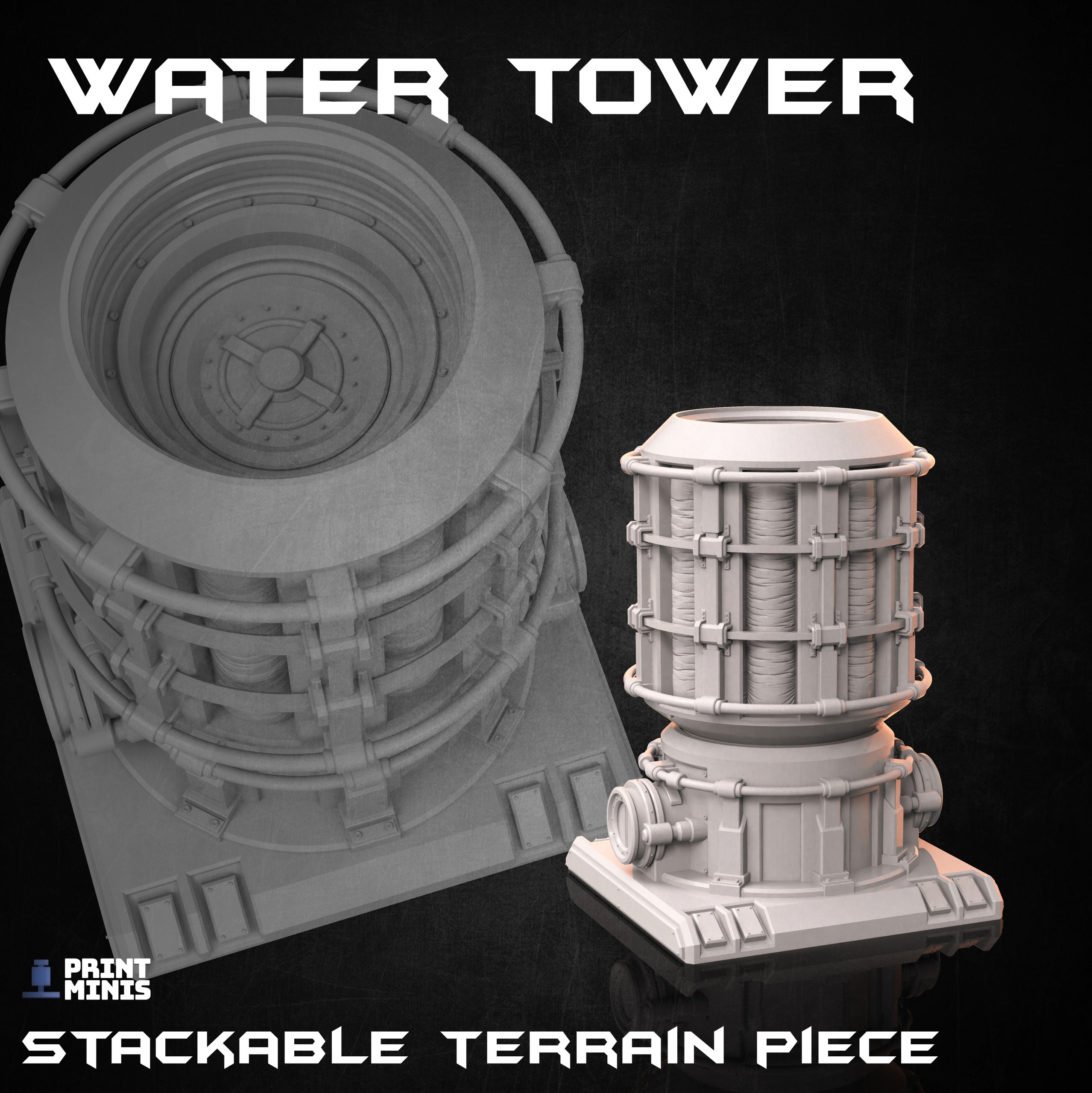 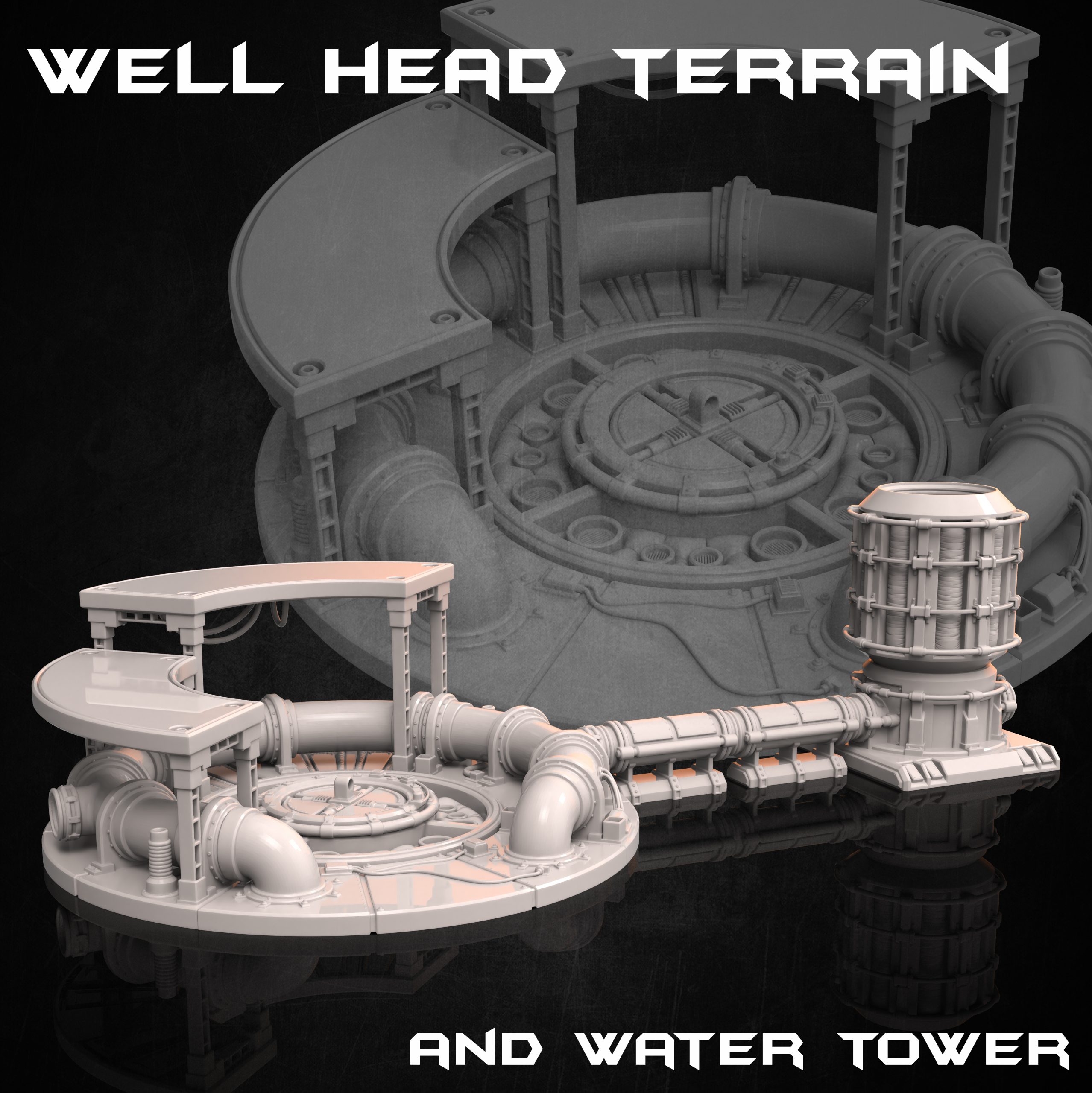 Finally, to showcase the beautiful and harsh desert environment of the Southern Sands, we have 18 stunning scenic bases as part of this collection, plus one large scenery piece - a giant desert rock! You'll find a sandy, dry ground covered with unusual alien desert plants. 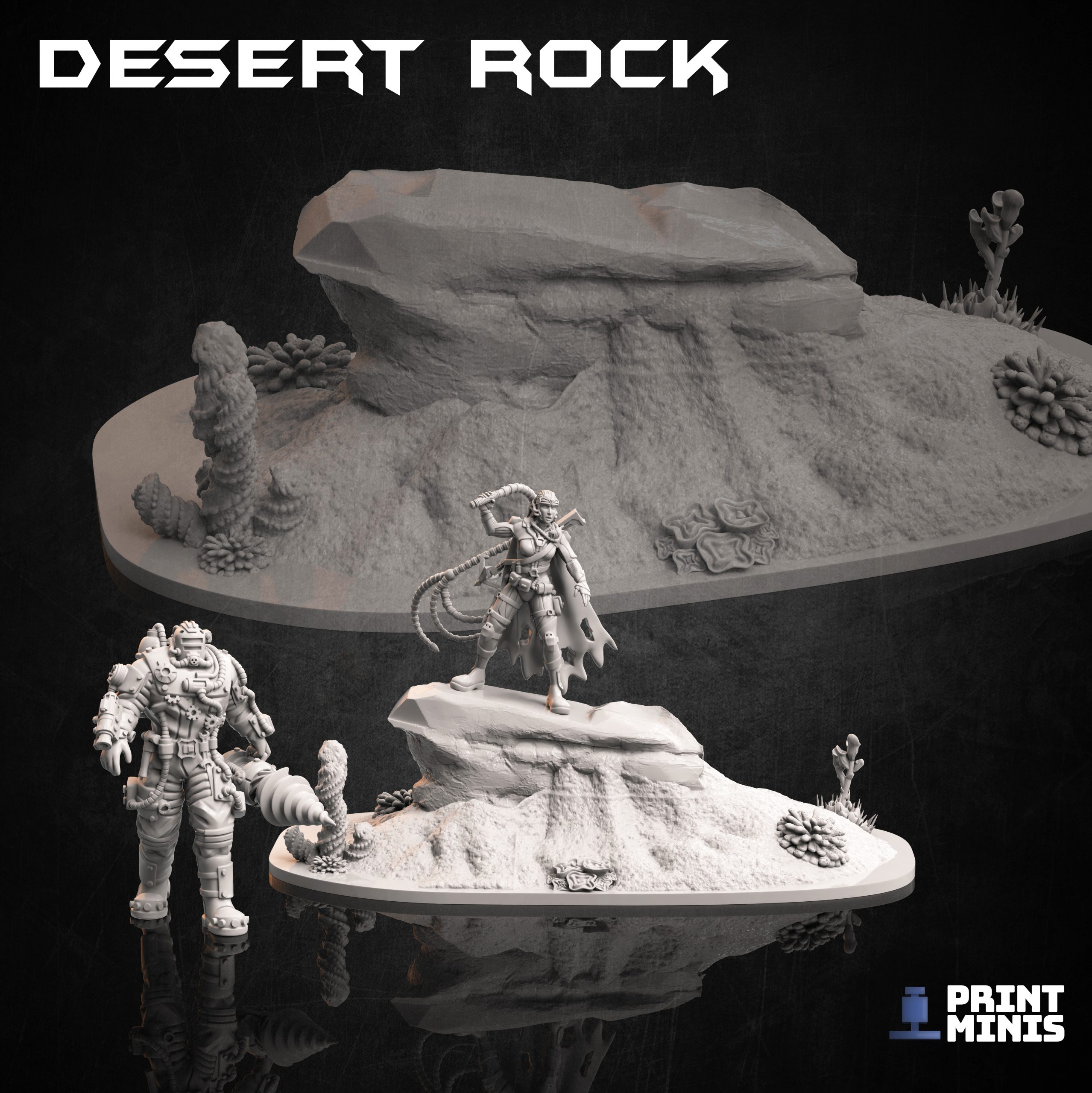 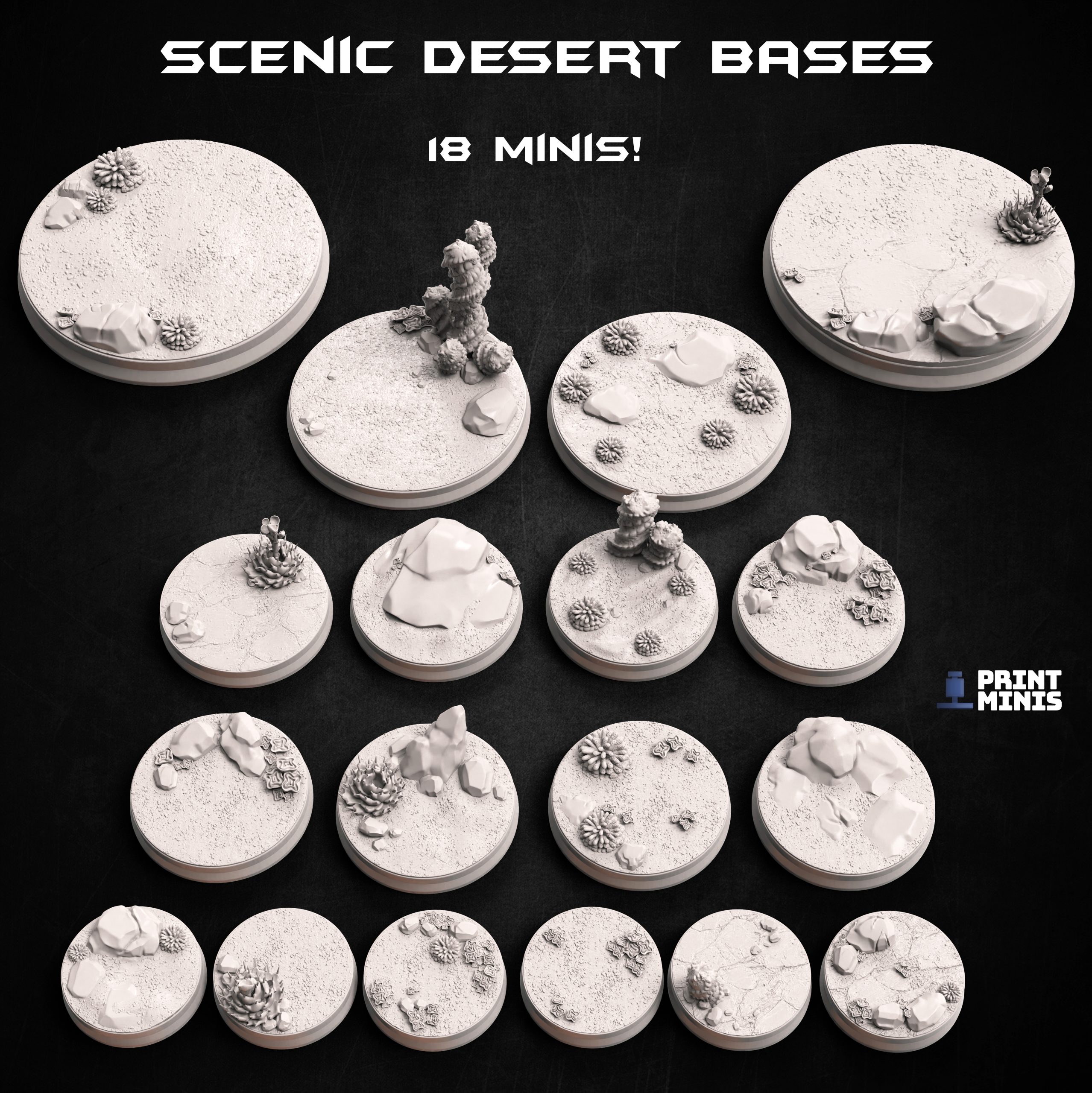 If you're not sure you want to join our service yet, jump on our email list to get a free miniature every month and monthly updates on our latest collection!
Subscribe on Patreon